Productivity Lost Due to Incarceration in the United States

Punishment for crimes is one of the oldest tenets of society. Laws that describe violations and the corresponding consequence go back thousands of years, even back to ancient Mesopotamia with Hammurabi’s Code. Since then, laws and their punishments have changed over time as we grow and develop as a society.

In the United States, incarceration for various amounts of time is a common form of punishment for crimes. In fact, the U.S. has the highest incarceration rate of any developed country and has for some time. It’s a complicated issue that stems from numerous problems and sparks debate between scholars, advocates, lawmakers, and many other groups. Certainly we understand that a significant number of inmates have charges related to drugs, and that too has become a topic of debate in recent years.

Putting aside politics and the ‘why’ behind the United States’ high rates of incarceration, we were interested in looking at the big picture of the country in terms of prison and jail populations. Additionally, we asked the hypothetical question, “How much productivity are states losing due to their incarcerated population?” Using numbers from The Sentencing Project and the U.S. federal government, we were able to answer this question in terms of hours and money lost.

How Many People Are in Prison in Every U.S. State? 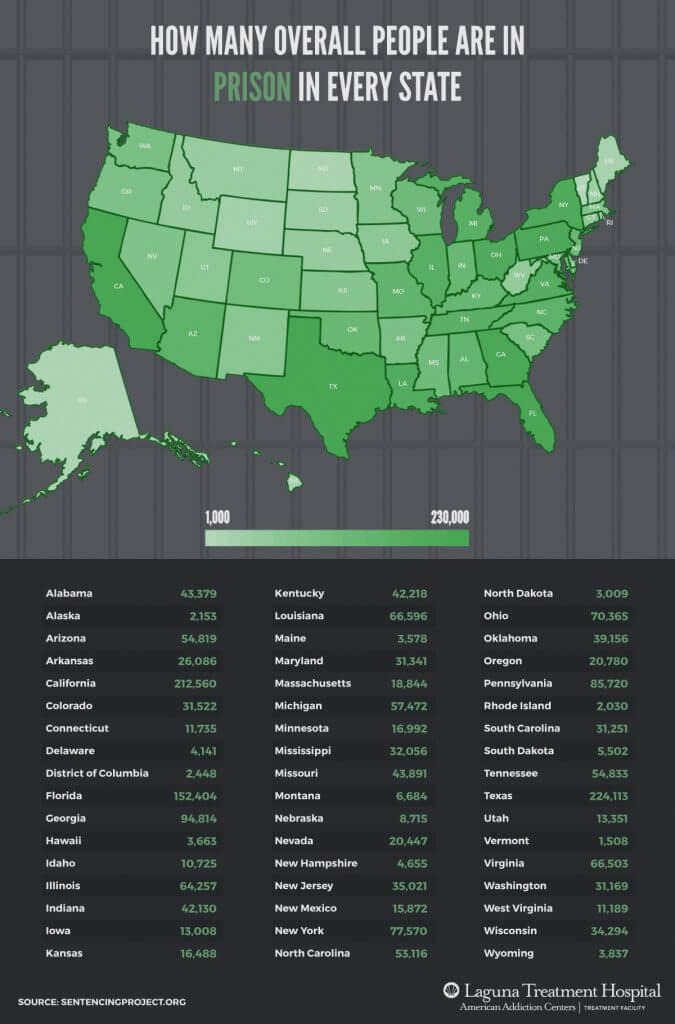 For our study, we first found the total number of prisoners in each state. The numbers are similar to the overall state populations with a few notable differences. Georgia, which is the 8th most populous state, has the 4th highest prison population. Louisiana is the 25th largest state by population but 8th in terms of inmates. On the other hand, states such as Vermont, Rhode Island, and Alaska have some of the fewest inmates and also some of the smallest overall populations.

The Percentage of Every State’s Population That Is Incarcerated 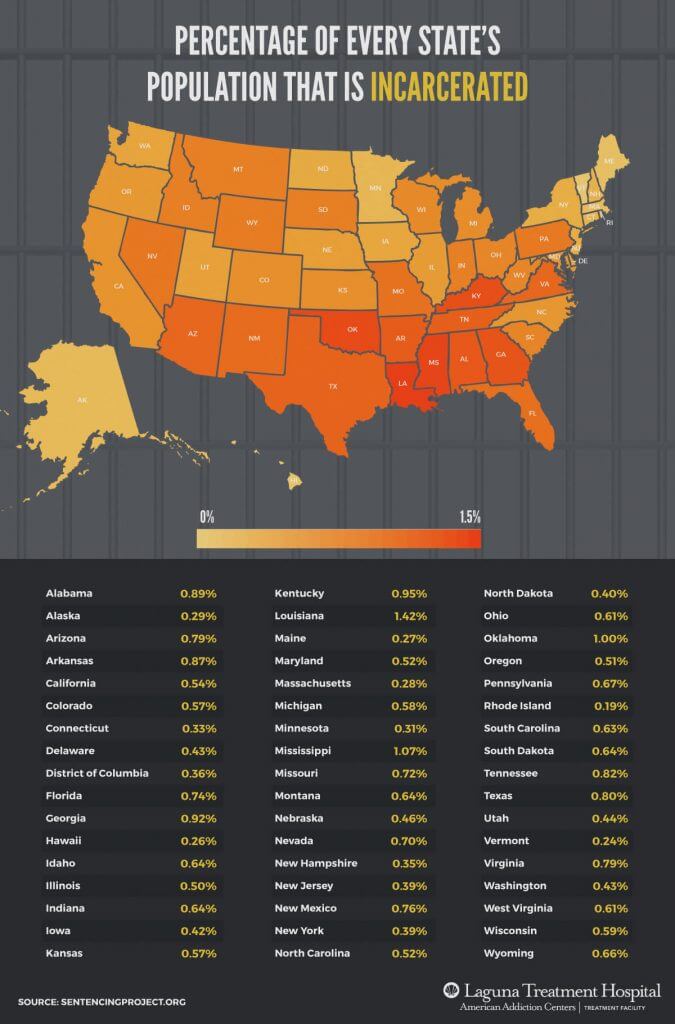 The Hours of Workforce Productivity Lost Due to Incarceration by State 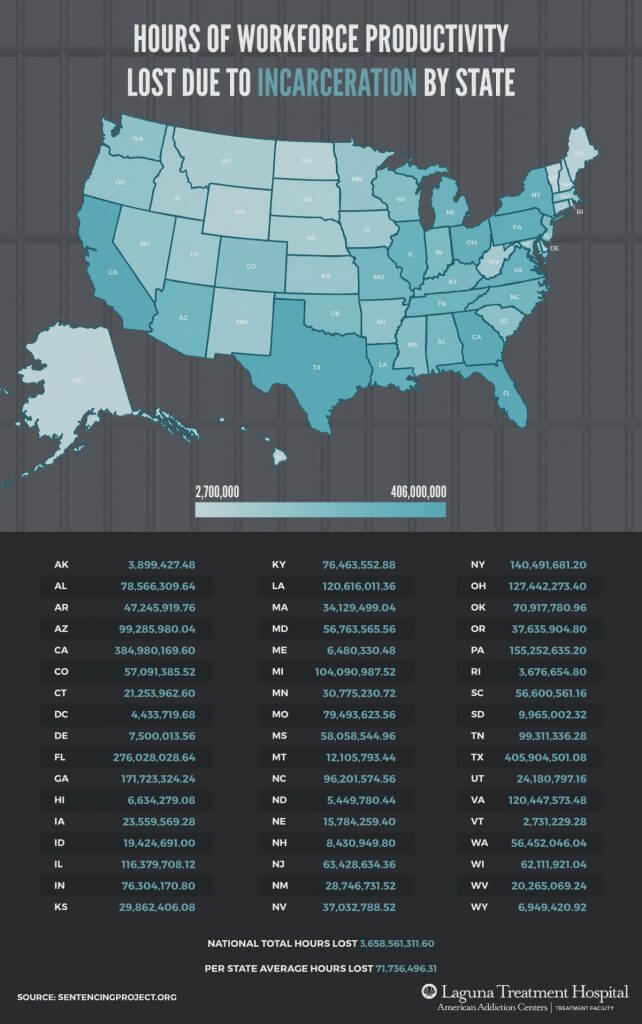 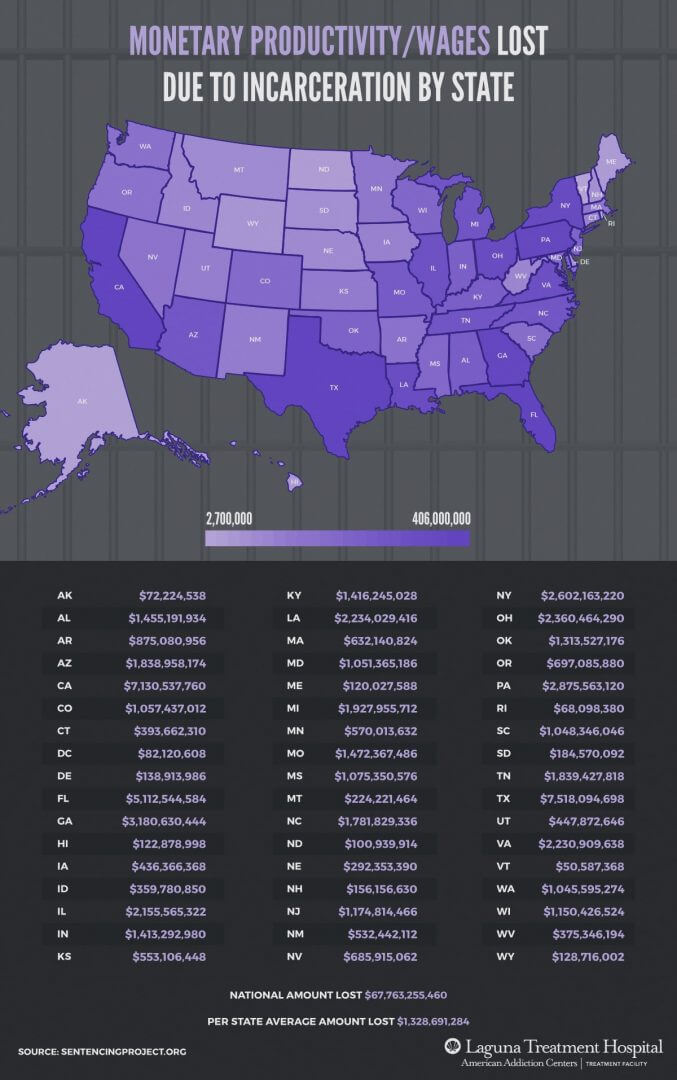 Finally, we took those hours and found out how much money is lost in wages. We took the total prison population in each state and multiplied it by $33,546, the inflation-adjusted dollar amount of productivity estimated is lost in a year per incarcerated person. This also follows the ranking of total population but it again provides a more relatable way to look at the data.

Overall, incarceration continues to be a point of discussion in the United States. We understand that there is more than one reason and more than one solution to this problem. We do believe, however, that education is a key part of helping, especially when it comes to drug-related crimes. They make up a significant portion of crimes in the U.S. and many of them can be avoided with education and discussion.

If you or someone you know someone who may have a substance abuse problem, contact us to learn more about how we can help.

Can I use this information?

The information and graphics in this blog post can be used and displayed by all commercial and noncommercial websites without charge. However, use is only permitted with proper attribution to LagunaTreatment.com. When using this information or any of these graphics, please include a backlink to this page.