What Are the Risks of Hydrocodone Addiction?

Anyone living in the US today who pays attention to the news is likely aware that the country is steeped in a prescription pill abuse epidemic. 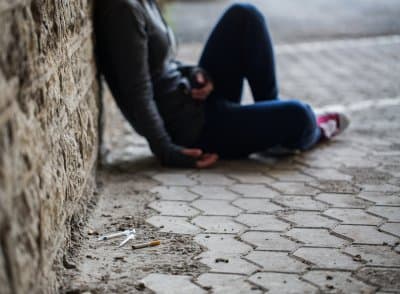 Pharmaceutical companies, as part of their research and development efforts, created a host of opioids, which are effective pain relievers. While this class of drugs has therapeutic merit, they are potentially addiction-forming drugs.

Hydrocodone is one example of a pain-relieving opioid. There are over 200 commercial medication products that contain this generic drug. In a medical treatment context, hydrocodone is used to treat moderate to severe pain. This opioid also works as an antitussive (i.e., a cough suppressant). Hydrocodone is the active ingredient in different branded drugs, including but not limited to:

Addiction is a primary risk of hydrocodone abuse. In fact, as Healthlinenotes, hydrocodone is the most abused prescription opioid in the US. The key here is to understand that the addiction risk runs with abuse and not with therapeutic use of the drug in accordance with a prescribing doctor’s orders. Typically, a person who has a legitimate prescription for hydrocodone will not become addicted. Yet, whether or not a prescribed hydrocodone user has an abuse intention or not, the act of taking too much of this drug can lead to addiction. For recreational hydrocodone users (i.e., those who do not have a diagnosed medical condition for which this drug is indicated and prescribed), the slope is especially slippery.

This drug can affect every facet of a person’s life, including physical health, psychological wellbeing, and relationships. In addition to what hydrocodone abuse affirmatively does to a person, such as causing addiction, there are a host of invisible missed opportunities associated with drug abuse. For instance, when hydrocodone abuse occurs in the prime of one’s life, there are untold and uncounted losses, such as a delay in starting a family, an inability to meet career goals, and all the friendships and connections one does not get to make.

Impact of Long-Term Hydrocodone Abuse on the Brain

When looking into the impact of a specific drug, be it a generic or branded one, it is helpful to note that most research studies focus on the entire drug class rather than one type in specific. For this reason, it is helpful to consider the long-term impact of opioid abuse rather than hydrocodone abuse in specific; there is less available reliable research on hydrocodone than on prescription opioids in general. One starting place is to focus on the impact of ongoing opioid abuse on the brain.

As the National Institute on Drug Abuse explains, one long-term effect of opioid abuse is slowed breathing (also referred to as depressed respiration). Slowed breathing results in less oxygen being sent to the brain, a condition known as hypoxia. Over the long-term, hypoxia can lead to neurological and psychological effects, such as permanent brain damage and/or coma. There has also been related research on heroin abuse’s effect on white matter in the brain. The white matter of the brain is involved in regulating behavior, responding to stressful situations, and decision-making skills. Studies show that heroin abuse can cause deterioration of white matter in the brain. Future research may find a similar connection between prescription opioid abuse and the erosion of white matter in the brain. A key takeaway here, however, is that even when hydrocodone or other opioid abuse ends, there may be a lasting negative impact on the recovering person’s brain structure and function.

Psychological health and physical are interrelated, not separate. However, much of the literature on addiction maintains the separation of brain and body, if only to make biological phenomena easier to comprehend.

One reality of long-term hydrocodone abuse is the way the body processes it, as well as other addiction-forming drugs. Yes, the body is built for survival, but it can be manipulated by illicit drug abuse. Individuals who use an addiction-forming drug, for therapeutic reasons or for abuse, will develop a physical dependence on the drug over time. There are two main hallmarks of physical dependence: tolerance and withdrawal.

Through the natural process of tolerance, the body will require more of a drug over time to deliver the desired effects. In the context of hydrocodone abuse, individuals who have habituated to getting a hydrocodone high will require more of this drug in one sitting, over time, to get the desired high. But tolerance has a dangerous aspect to it. Although the body requires more of a drug, it does not increase its defenses against an overdose or somehow wall off the person to dangerous side effects. Through the process of tolerance, however seemingly illogical, the body essentially asks for more of a drug, like hydrocodone, even though an overdose can lead to a fatality. In short, when drugs hijack the body’s normal operations, the body ceases to act in the way nature intended and cannot be relied on to support survival.

When individuals stop abusing hydrocodone or significantly reduce the familiar amount, the natural process of withdrawal will set in. Since the body has become habituated to a drug, such as hydrocodone, it wants to maintain its new level of functioning, even though doing so runs counter to survival. To keep the status quo going, the body will manifest symptoms. The symptoms can range from mild to moderate to severe. On the one hand, these symptoms can be thought of as the natural expression of the body being taken off a dangerous drug. On the other hand, these symptoms can trigger relapse as a person wants to take more of a drug and may even experience drug cravings just to stop the symptoms. The following are some of the withdrawal symptoms associated with stopping hydrocodone abuse:

Again, one of the least helpful aspects of withdrawal is how it can trigger a relapse. According to the National Institute on Drug Abuse, there is a 40-60 percent relapse rate among individuals in recovery from substance abuse. Of course, this statistic also reflects that 40-60 percent of individuals may achieve lasting recovery without relapse. To prevent relapse during the withdrawal phase and beyond, there are medications that may be used as part of medication-assisted treatment (MAT). These medications include methadone, buprenorphine (e.g. Suboxone or Subutex), and naltrexone. The availability of this treatment depends on the rehab center.

Research shows that there are a host of physical consequences associated with opioid abuse. When a pharmaceutical company tests a drug, it typically pays attention to the side effects associated with use, not abuse. The full range of long-term side effects of hydrocodone may not be known and depends largely on reporting from rehab centers, hospitals, clinics, and research findings in this area.

However, information about the long-term use of hydrocodone sheds light on what side effects may arise incidental to abuse of this drug. The following are some of the known side effects that arise with long-term opioid use:

There is also a strong advisement to avoid alcohol while taking hydrocodone (with or without acetaminophen). However, a person who is engaging in substance abuse may have diminished capacity to understand the dangers inherent in mixing drugs and alcohol.

Use of alcohol and acetaminophen (in an opioid drug such as Vicodin or on its own) can increase the risk of liver damage and liver disease down the road.

Symptoms of liver damage include but are not limited to: ongoing nausea and/or vomiting, stomach pain, extreme fatigue, and/or a yellowing of the skin and/or eyes.

The dangers of acetaminophen highlight one of the many negatives associated with hydrocodone abuse. A person may seek a hydrocodone-high and not realize that there are additional ingredients present that are harmful.