The term diet pill is a generalized term that applies to a number of over-the-counter medications or products and to a number of controlled substances.

Many prescription diet pills are classified as Schedule III or Schedule IV controlled substances by the United States Drug Enforcement Administration (DEA). In addition, the term diet pill refers to a number of different types of products with different purposes.

A very general classification of these products follows.

Many of the current dietary aids in the market were developed to replace amphetamines as dietary supplements; however, these often have amphetamine- or stimulant-like properties themselves. 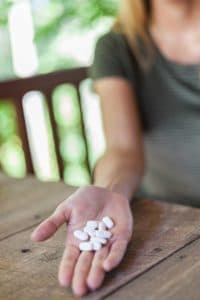 According to a number of organizations, such as the Centers for Disease Control and Prevention (CDC), abuse of these drugs, especially over-the-counter dietary aids, is a national problem in the United States. Many of these products are not recommended as resources for healthy weight loss and are actually ineffective in the long run. Abuse of diet pills typically occurs as a result of individuals attempting to lose weight, attempting to experience the stimulant properties of some of these substances, or in conjunction with having some other psychological disorder, such as an eating disorder. Abuse of these products appears to affect both males and females, different ethnic groups, and both adults and young people, although the abuse of “diet pills” is often considered to be a more serious issue in adolescents and young adults.

A large epidemiological study from the National Comorbidity Survey Replication found that 6 percent of adolescent girls and 4 percent of adolescent boys reported previous-month use of diet products without being under the supervision of a physician. A study released by the University of Minnesota that surveyed over 2,500 females indicated that 20 percent who were between 19-20 years old had used diet pills and almost two-thirds of the sample engaged in weight control behaviors that were considered to be unhealthy. In addition, other research indicates that individuals with eating disorders, such as bulimia, report high rates of diet pill and laxative abuse.

Abuse of these substances is associated with a number of different side effects. Depending on the substance, adverse effects from abusing diet pills include:

Although not as commonly abused as laxatives and stimulants, herbal dietary products are of special concern as their manufacture is not regulated by the FDA. Even when the FDA identifies a particular herbal substance as “unsafe,” it may not have the authority to control its distribution. This means that the ingredients listed on the label of the product may not be accurate, and there could be potential unknown interactions that occur with other drugs and even foods when using these products.

It is important to be cognizant of the fact that just because something is labeled as “natural,” it is not analogous to the product being safe for consumption. A number of “natural” substances are not safe to consume. One of the most publicized examples of this is the widespread use of the naturally occurring Chinese snakeroot (Aristolochia fangchi) throughout the world and the many serious renal issues related to its use.

number of different formal signs and symptoms are associated with the development of a substance use disorder (the current clinical term that encompasses both the notions of substance abuse and addiction). Many individuals who abuse diet pills and develop formal substance use disorders also have co-occurring psychological disorder, such as an eating disorder, personality disorder, obsessive-compulsive disorder, etc. Others may have subclinical psychological symptoms that do not fit the diagnostic criteria for a formal disorder, but the symptoms contribute to their issues with substance abuse, such body image issues.

Typically, substance use disorders are identified by several general signs and symptoms that have been categorized by the American Psychiatric Association. These include:

Trouble controlling use of the substance, such as:

In terms of diet pills, any individual who frequently uses prescription medications or dietary aids without a prescription, in a manner not consistent with their prescribed purposes, or mixes them together with other medications or drugs is most likely abusing these drugs. People who abuse stimulant medications, such as certain types of dietary aids, may also display alternating periods of increased energy, talkativeness, and/or a decreased need for sleep with periods of lethargy, drowsiness, depression, and apathy. Individuals who chronically abuse diet pills may display significant and even unhealthy weight loss, and may suffer from what is often referred to as the “yo-yo syndrome” which consists of dramatic periods of weight loss followed by dramatic periods of weight gain as they go through periods of bingeing on drugs and then periods of abstinence.

When polysubstance abuse occurs, multiple types of diet pills are most commonly abused together and with central nervous system depressants, such as alcohol, benzodiazepines, and opiate drugs, as these drugs mediate the effects of the stimulants.

Individuals abusing diet pills will often require formal interventions to assist in recovery. A number of different substances that are labeled as “diet pills,” such as stimulants and even laxatives, can produce issues with physical dependence. Physical dependence consists of the development of tolerance to and withdrawal symptoms from a particular substance, and an individual going through withdrawal, even if it is relatively mild, is always at an increased risk for relapse. This is because withdrawal symptoms produce discomfort and distress, and discomfort and stress are triggers for substance abuse; withdrawal symptoms are almost immediately mitigated when an individual begins using their substance of choice. Thus, anyone who has abused any type of diet aid should consult with a physician and consider an initial physician-assisted withdrawal management program as their first stage of recovery.

In this program, the physician will administer a number of different medications that will reduce the individual’s withdrawal symptoms and supervise the person as they go through the withdrawal process to ensure that they negotiate the withdrawal syndrome as comfortably as possible. This will significantly reduce the potential for relapse in the early stages of recovery. Continued medical management of any co-occurring mental health conditions and physical issues should continue on an ongoing basis.

Success in substance use disorder treatment is highly related to the length of time an individual remains in therapy and continues to attend social support groups. Eventually, formal substance use disorder therapy will be discontinued; however, recovering individuals should remain in social support groups and engage in other forms of ongoing intervention following complete abstinence. Often, individuals in recovery need to engage in ongoing forms of aftercare for years.