In 2019, approximately 14.5 million Americans over the age of 12 had an alcohol use disorder1—a diagnostic term for what is commonly known as alcohol addiction. Millions more regularly engage in patterns of heavy alcohol use, including binge drinking.2

Binge drinking and/or heavy alcohol use can have pervasive adverse impacts on a person’s health. Alcohol abuse can impact several different organ systems and a range of physiological processes.3 In this article, you’ll learn how alcohol can affect the digestive tract and other gastrointestinal system organs.

Alcohol’s Effects on the GI Tract

The gastrointestinal tract has a front row seat to alcohol’s journey through the body once consumed. Alcohol is absorbed into the bloodstream in the GI tract, and it’s even the site of some breakdown of alcohol.5

Some of alcohol’s effects on the GI system is thought to be mediated through its direct contact with the lining of the GI tract, leading to mucosal inflammation, poor nutritional absorption, and, over time, even increasing the risk of certain cancers. Alcohol may directly increase the secretion of gastric acid in the stomach and can impair the activity of the muscles that normally keep stomach contents from leaking into the esophagus. It can also interfere with normal muscles movement in the small and large intestines, which may contribute to the unfortunate consequence of diarrhea for heavy drinkers.5

What is included below is not an exhaustive list, but just a sampling of alcohol-related GI tract health risks.

Chronic alcohol use can lead to a condition known as sialosis. Though most often painless, the condition results in bilateral swelling of the parotid glands, and may interfere with saliva production. Decreased salivary production may increase the risk of cavities and a general decline in oral health. When severe enough, parotid gland swelling can also change a person’s facial appearance. Sialosis is also associated with diabetes and malnutrition but is often diagnosed in people who drink heavily.5, 6, 7 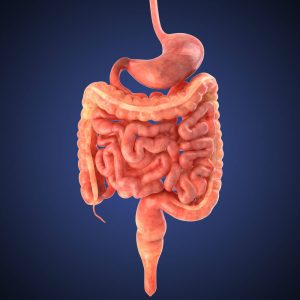 Although alcohol may not be the sole cause of the chronic burning feeling in the esophagus resulting from acidic digestive fluids coming back up from the stomach, it is thought to be a significant contributor to GERD in those who do drink. Drinking may be associated with GERD for several reasons. It can lead to dysfunction of the lower esophageal sphincter, which otherwise keeps gastric contents from moving upward into the esophagus.5, 8

It may also delay gastric emptying and impair normal forward movement through the GI system. Because alcohol is in contact with the mucosal lining of the esophagus and stomach, it can lead to direct tissue inflammation and damage, additionally contributing to the symptoms of GERD. Stopping alcohol consumption generally helps with the symptoms of GERD.5, 8

This includes oral and esophageal cancers, among others. Damage to the mucosal lining in the esophagus increases the risk of esophageal cancer.5 Heavy drinking—consuming more than 30 drinks a week—has been estimated to increase the risk of oropharyngeal cancers by as much as 9-times. For someone who smokes and drinks, the risk is additionally heightened.9

There are a few theories for how alcohol increases the risk of cancer, including:9

A specific type of bleeding in the upper GI tract is called Mallory-Weiss syndrome (MWS). This is diagnosed from horizontal tears to the mucosal lining of the esophagus. Around 50 to 70% of patients who are diagnosed with MWS have a history of heavy alcohol ingestion.10, 11 In many of these instances, the tears occur as a result of increased gastric pressure in connection with repeated retching or vomiting after excessive drinking. Bleeding from a Mallory-Weiss tear can be worsened by the presence of portal hypertension and esophageal varices, which are themselves potential complications of alcoholic liver disease.

Gastritis is the inflammation of the stomach. There are several things that can cause gastritis such as infection with a bacteria called H. pylori as well as NSAID-mediated changes to the stomach lining. Drinking in connection with either of these can worsen the situation. However, even on its own, consuming too much alcohol can lead to acute gastritis through direct mucosal injury.11, 12

Some signs and symptoms of alcoholic gastritis include:11, 12

How Alcohol Impacts the Liver

Alcohol is absorbed through the digestive tract and primarily metabolized by the liver. As the main site of alcohol metabolism, the liver is ground zero for several of alcohol’s detrimental health effects. Drinking too much can cause the following health risks in the liver:2, 3

Some potential symptoms of alcoholic liver disease include:13

Alcohol’s Effect on the Pancreas

Alcohol’s effects on the pancreas’s ducts and acinar cells—which are responsible for synthesizing, storing, and secreting digestive enzymes—is thought to be the likely cause of alcohol-related pancreatitis. One potential mechanism involves alcohol increasing the viscosity of certain pancreatic fluids, which can lead to these small ducts becoming plugged.14

Over time, these plugs can result in pancreatic tissue ulceration, scarring, and fibrosis.14 Alcohol-related changes in pancreatic enzymatic activity can also lead to a phenomenon known as auto-digestion, which can further promote inflammation of the pancreas.

Alcohol contributes to several significant health risks within the GI and digestive system, but how does it affect metabolism from a weight gain/loss perspective? Unfortunately, there isn’t a straightforward answer.

Several studies have been conducted on how alcohol intake can potentially affect weight. The results, however, are wide ranging. In some instances, alcohol consumption might be a risk factor for obesity for some people, especially when consumed in large quantities. In a study that examined binge drinking and its effect on weight gain, the risk of obesity was 70% higher in the heaviest drinking group compared to the lightest.15

However, for others, light-to-moderate intake wasn’t found to cause weight gain. Even those who consume moderate amounts of alcohol might even have a healthier lifestyle in general, and might accommodate for some of the potential weight impact of drinking with exercise and modified food intake.15

Beyond this somewhat inconclusive connection to weight changes or obesity, alcohol abuse is known to be associated with several significant medical conditions within the gastrointestinal and digestive tracts. If you or a loved one are experiencing adverse health effects due to alcohol abuse, help is available. Call us at to talk to an experienced Admissions Navigator to learn more about alcohol detox inpatient programs and other inpatient treatments in Orange County for alcohol abuse.

Laura Close is a Senior Web Content Editor at American Addiction Centers and an addiction content expert for Laguna Treatment Hospital. She has a bachelor’s degree in English and nearly a decade in professional editing experience that includes...Read More