What Happens When You Swallow Mouthwash?

Mouthwash is a term that covers several different rinses involved in oral hygiene. According to the American Dental Association (ADA), the two general categories of mouth rinses are therapeutic, which have chemical or biological applications such as reducing or controlling gingivitis, bad breath, tooth decay, and/or plaque, and cosmetic, which do not have those applications and only produce temporary effects such as masking bad breath.

Some therapeutic mouthwashes require a prescription and some can be purchased over-the-counter. Mouthwash should not be used in lieu of brushing or flossing, but it can be a beneficial addition for some individuals and can reach areas that a toothbrush cannot.

Some varieties of mouthwash contain alcohol, which helps fight some microbes and is often used as a carrier for flavoring or other ingredients. Mouthwashes can have a high alcohol content, especially when compared to the alcohol content of beer or wine.

According to one article, some common mouthwashes with alcohol are between 14% and 26.9% alcohol, whereas beer is typically 3% to 7% and wine is usually around 12%. This means that mouthwash is sometimes misused by people for recreational purposes, which can be very dangerous.

Why Do People Drink Mouthwash? 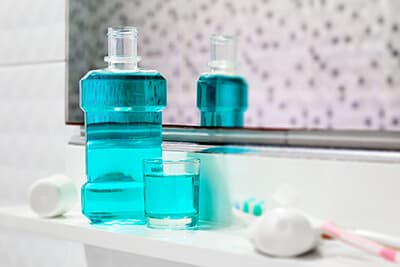 The main reasons reported for drinking mouthwash were its low cost and its availability in certain situations where alcoholic beverages are not available. Incarcerated individuals, people in the military, and people who have been hospitalized may ingest mouthwash because they cannot otherwise access alcohol.

Sometimes, people who were in recovery from alcohol use disorder but relapsed may consume mouthwash so their loved ones will not know they relapsed. It is easy to obtain, easy to hide, and does not smell distinctly like alcohol.

In addition to mouthwash, other non-beverage ethanol (NBE) products include hair spray, cough/cold medications, perfume, hand sanitizer, and aftershave. Because household products containing alcohol are prone to being stolen, some stores have placed these items behind the counter or in locked cabinets.

When most people think of alcohol, they think of a specific type of alcohol called ethanol; this substance is the intoxicating chemical found in beer, wine, and liquor. Ethanol is also found in some types of mouthwash.

To try to discourage people from drinking mouthwash, manufacturers alter the ethanol in it to make a “specially denatured alcohol.” The added ingredients, however, don’t prevent the effects of ethanol ingestion, and thus are not an effective deterrent for individuals desperate to consume alcohol. Examples of ingredients added to discourage consumption include:

This unit of measurement is typically used for health guidelines, and it does not mean that these are the normal serving sizes of these beverages. One drink at a restaurant, bar, sporting event, or elsewhere may contain multiple standard drinks.

The National Institute on Alcohol Abuse and Alcoholism (NIAAA) states that standard drinks are:

If you are struggling with alcohol misuse you should know treatment is effective. At Laguna Treatment Hospital in Orange County, CA alcohol rehab is offered in a safe and comfortable setting.

As mentioned above, some common alcohol-containing mouthwashes are between 14% and 26.9% alcohol. Therefore, between 2 and 4.5 ounces of these mouthwashes could equal one standard drink. Aside from the other potential dangers of drinking mouthwash, the fact that mouthwashes can contain such varying amounts of alcohol by volume can result in a person drinking much more alcohol than they realize.

The Toxic Ingredients in Mouthwash 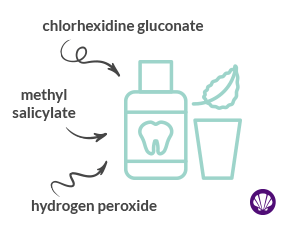 Since mouthwash is not designed to be consumed, it should not be swallowed. Depending on the mouthwash, there could be some ingredients that are harmful to the body if ingested in large quantities. Accidentally swallowing a little mouthwash is generally not harmful but ingesting large amounts can be dangerous.

Aside from ethanol, some of the potentially harmful ingredients that may be found in mouthwash include:

What Are the Harmful Effects of Drinking Mouthwash?

Mouthwash that contains ethanol can cause intoxication if ingested, like other alcoholic drinks, or even alcohol poisoning if too much is consumed in a short period of time. Furthermore, because mouthwash is not designed to be ingested, there are other ingredients that can be dangerous if consumed.

Overdosing on mouthwash may cause symptoms such as:

If you think that you or someone else may have overdosed on mouthwash, whether or not the mouthwash contains alcohol, call 911 or the Poison Help hotline (1-800-222-1222). Do not wait to see if symptoms develop, call right away if an overdose is suspected. In an emergency, call 911.