Marijuana is the most common drug of abuse in America. In real numbers, according to the 2014 National Survey on Drug Use and Health, an estimated 22 million Americans aged 12 or older were considered current marijuana users. As the number of marijuana users increases, there is growing concern because some of today’s strains of marijuana are more potent than ever.

While marijuana can be composed of around 500 different chemical compounds, tetrahydrocannabinol (THC) is the compound that is mainly responsible for the drug’s psychoactive effects. CBS News has reported that recent large-scale seizures of marijuana have found the drug to have THC levels as high as 20-30 percent, which is at least a 300 percent increase in potency compared to 20-30 years ago. Further, marijuana is currently available in heretofore-unknown super-potent concentrates, such as waxes, oils, and tinctures.

At present, marijuana may be the most popular illicit drug, but short-term pleasures can lead to long-term problems. Research demonstrates that marijuana can have a long-term negative impact on the brain, lungs, heart, mental health, and pregnancy outcomes. This article spotlights how marijuana use can cause long-term changes to the brain. While marijuana may be associated with a fun time, the impact of this drug is no laughing matter.

Marijuana and the Brain

Since these cannabinoid receptors are part of the brain’s endocannabinoid system, a complex that plays a role in pain perception, memory, mood, and appetite, THC affects these areas.

It’s no surprise that some of the possible immediate side effects of marijuana include hunger, memory impairment, elevated or depressed mood, and a feeling of being light.

Chronic Use and Impact on the Brain

Various research studies, testing and controlling for different phenomena and composed of different types of participants, have considered the impact of marijuana use on the brain. Taken all together, these studies provide insight into the factors that influence how much of an impact marijuana can have on the brain. According to the National Institute on Drug Abuse, the following are some key highlights drawn from notable research studies:

There does appear to be support for the proposition that using marijuana while the brain is in development (i.e., in adolescence and into early adulthood) can present the greatest risk of long-term negative impact on the brain. The American Psychological Association, in a discussion of this topic, considers a well-known long-term study from New Zealand. The research involved 1,000 participants born in 1972. At 18, 21, 26, 32, and 38 years of age, each participant answered questions about their marijuana use. The researchers conducted neuropsychological testing on the participants when they were 13 and 38 years of age. The New Zealand researchers discovered that those participants who persistently used marijuana experienced a decline in IQ/neuropsychological functioning points compared to the rest of the group. The researchers likened the level of cognitive decline to that which they would have expected if the participants had been exposed to lead poisoning. In short, the level of cognitive decline was significant.

Imaging studies also provide insight into the impact of marijuana on the structure of the brain. In one imaging study, researchers took magnetic resonance imaging (MRI) tests of 48 adults who were considered to be chronic users of marijuana (i.e., use of marijuana a minimum of three times per day). This group was compared to 62 study participants who did not consume marijuana. The main findings of the study related to brain volume of gray matter (in the orbitofrontal cortex) and a neurobiological phenomenon known as connectivity. The participants who used marijuana chronically for at least four years had a smaller volume of gray matter. A key insight is that smaller gray matter volume is typically associated with addiction. In other words, chronic marijuana use could in fact redesign the brain in a way that makes it more susceptible to drug use.

The researchers acknowledged that while the differences in the brains between the chronic smokers and the control group were observable on the MRI—the brains actually looked different—they could not conclude that the chronic marijuana use was the cause. It was possible that brains of those who chronically used marijuana looked this way even before the marijuana use.

A study published in the Journal of Neuroscience in 2015 takes up the issue of the impact of marijuana on the brain. The study involved adults and adolescents and also used brain imaging with an emphasis on four areas of the brain: the cerebellum, hippocampus, nucleus accumbens, and amygdala. The adult participant group included 29 people who used marijuana daily and 29 people who did not use marijuana at all. The adolescent group followed the same guidelines, and there were 50 adolescents in each group. This study was designed to be more expansive than other brain imaging studies. For instance, it factored in alcohol use of the participants because this drug is also associated with contributing to changes in the brain. A main finding of this study was that there were no significant differences between the brains of chronic marijuana users and nonusers in the four areas of the brain imaged and researched.

Casual Use and Impact on the Brain

Within the body of research that considers the long-term effects of marijuana on the brain, much of the focus appears to be on chronic use. But one study of college students in Boston looked specifically at how casual use of marijuana may cause changes in the brain. The median number of marijuana joints per week was six in the smoking group, which is considered casual use. The study used imaging to review the brain of 40 participants in college and 18-25 years of age. Of this group, 20 participants used marijuana at least once a week while the other 20 did not use marijuana. The study took place over 90 days and required the marijuana users to closely track their marijuana use.

The study looked at different regions of the brain as well as the volume of gray matter and found that the marijuana users showed a greater level of brain abnormalities than the nonusers. The next phase of research will necessarily involve studying if these brain abnormalities influence brain functioning and to what extent. For now, Dr. Hans Breiter, a senior researcher on this study, recommends that efforts be made to educate the public about the potential impact of marijuana on individuals under 25-30 years of age.

Danger of Super-Potent Marijuana on the Brain 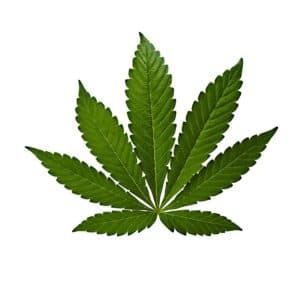 Due to the availability of super-potent marijuana (i.e., marijuana with high THC levels), some researchers are questioning whether these amped-up variants present an increased risk of brain damage to users. According to a King’s College London study, skunk, a super-potent form of marijuana can cause damage to the corpus callosum. This region of the brain is responsible for carrying messages between the right and left sides of the brain. When the corpus callosum is impaired, a person may face an increased risk of mental illness and psychosis. The symptoms of psychosis can include hallucinations and slower brain activity.

But even if a mental health disorder does not emerge, researchers found that the repeated use of high-potency marijuana significantly affected the composition of white matter fibers in the brain. While research must continue as to the impact of damaged white matter fibers on brain function, a researcher in this study advised that the public should be made aware of the potential harm associated with super-potent marijuana.

At times, the research on marijuana and the brain can appear to present conflicting, or at least non-complementary, findings. But these research studies share a common denominator: concern about the brain health of people who chronically or casually use marijuana, especially adolescents and young adults. As research grows in this area, the public can be provided with a more nuanced education about marijuana, which, as a cohort of studies makes clear, presents different risks under different circumstances. Access to information about marijuana can help the public to form a well-rounded opinion about use of this drug recreationally and, in the context of medical use, whether the rewards outweigh the risks.

herbalmarijuana
Ready to get started?
We're available 24/7 to answer questions and help you make decisions about starting recovery.
What's next for you?Recovery is possible. We're here to help with your addiction.