Unfortunately, substance use among pregnant women is not uncommon. According to data from 2012, 5.9% of pregnant women in the United States use illicit drugs, 8.5% drink alcohol, and 15.9% smoke cigarettes. Some of these women may also engage in polysubstance abuse. The opioid epidemic has also touched pregnant mothers, and the rates of prescription painkiller misuse among expecting women increased 5-fold in just 9 years, from 2000 to 2009.2

How Do Drugs Impact a Fetus? 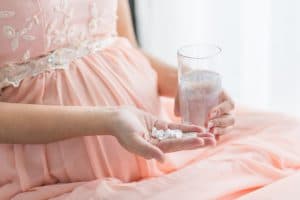 During pregnancy, the mother and fetus share a vital, inextricable connection. The placenta grows within the uterus and, via the umbilical cord and the shared circulation of maternal blood, provides the means for the developing fetus to eat and breathe and begin building immunity.3 The child gets vital nutrients from the placenta but also may be exposed to harmful substances, as drugs and alcohol can cross the placental barrier and impact the fetus.1 No amount of alcohol is considered safe during pregnancy, and the use of both illicit and prescription drugs poses certain risks to the child—risks which may include miscarriage. Of course, certain prescription drugs may be necessary for the health of the mother and/or baby, but all pregnant women should discuss the risks and benefits of any potential medications with their doctors.1

Drugs and alcohol can affect a developing child in several ways:1

A miscarriage is defined as the death of the fetus before 20 weeks of gestation. While miscarriage is extremely common, occurring in up to 25% of recognized pregnancies,4 prenatal substance use heightens the risk.5 The risks of miscarriage for each individual woman depends on the specific substance being abused and the amount and frequency of use.2

Alcohol is a particularly dangerous substance for a developing fetus. It easily crosses the placenta to enter fetal circulation, where it can then have a devastating impact on the unborn baby; in fact, the levels of alcohol that accumulate in fetal tissues are proportional to the blood alcohol concentration (BAC) of the mother.6

According to the Centers for Disease Control and Prevention, smoking not only makes it more difficult to conceive but makes miscarriage more likely.

Smoking is also associated with other risks to the child, including the separation of the placenta from the womb, posing threats to both the mother and child. Smoking cigarettes both during and after pregnancy is also linked to a greater risk of sudden infant death syndrome, or SIDS.8

With the increasing legality of marijuana, many people have come to believe it is harmless, but any substance use, both legal and illicit, comes with risks, especially to pregnant women. The findings from studies on marijuana’s impact on developing babies are somewhat conflicting and the research itself is challenging to conduct and evaluate because many pregnant women who smoke marijuana also smoke tobacco and/or drink alcohol.9

Marijuana does not appear to be linked to a greater risk of miscarriage; however, some studies do find correlations between the use of marijuana and problems such as:9

Opioids include both prescription painkillers and heroin. Use of opioids during pregnancy introduces certain risks for both mother and child. The U.S. National Library of Medicine states that using opioids while pregnant can increase a woman’s risk of miscarrying, as well as the likelihood that she’ll give birth early.

A baby exposed to opioids in the womb also has a higher risk of low birthweight, gastroschisis (a hole in the baby’s abdomen through which intestines, stomach, and other intraperitoneal organs may protrude), and defects of the brain, spine, or spinal cord.10

Cocaine use during pregnancy can be particularly dangerous to both mother and child. Pregnancy already causes significant cardiovascular changes in the mother’s body, but cocaine use can intensify some these changes and, furthermore, may cause spontaneous miscarriage.11

Prenatal cocaine use may also lead to problems such as hypertensive crises (dangerous increases in blood pressure), seizures in the mother, preterm birth, and placental abruption.11 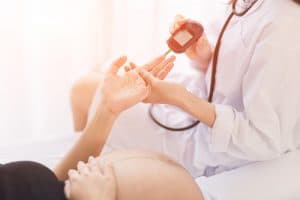 Pregnant women struggling with substance use may be in particular need of comprehensive, compassionate prenatal care and would furthermore benefit from professional substance treatment efforts to help them stop using. Good doctors will not judge you for seeking help; they will discuss the risks to both you and the child and develop an appropriate plan to minimize those risks. This may include addiction treatment at a specialized program that treats pregnant women and certain medications.

Methadone maintenance is commonly recommended for pregnant women with opioid use disorders, as it helps minimize the withdrawal symptoms that may occur in pregnant women who attempt to quit opioids. Left unmanaged, opioid withdrawal symptoms in the mother may increase the likelihood of contractions that may cause miscarriage or preterm birth; methadone stabilization may decrease the risk of such complications and could save the life of the baby. The Substance Abuse and Mental Health Services Administration (SAMHSA) states that “thousands of babies born to mothers on methadone do as well as other babies.” SAMHSA also notes that while not all of the effects of methadone on a baby are known, the health of the child will be much better than if the mother had been actively using heroin.12

Buprenorphine treatment is another potential option for pregnant women with opioid addictions and has been found to be a “safe and effective alternative to methadone.” Buprenorphine may even have some advantages over methadone when used to treat pregnant women. For example, it may result in less severe opioid dependence in the fetus and milder symptoms of neonatal abstinence syndrome after birth.13

Different behavioral therapies will also act as vital components of treatment, as they can help the mother learn new ways of coping and develop the skills to modify negative, self-harming beliefs and maladaptive behaviors that perpetuate substance use.

While pregnancy can be a powerful motivator for many women to address substance abuse problems for the health of themselves and their baby, others may continue to struggle with addiction throughout the pregnancy.

Women who are addicted to substances during pregnancy may feel tremendous guilt and shame about their use, but they may be unable to stop using due to lack of access to treatment or other barriers. Should a miscarriage occur, this can add a heavy layer of grief to an already difficult struggle. Getting into treatment early can help to create the best possible chances for both mother and baby. While not all substance treatment programs offer treatment tailored to the special needs of expecting mothers, some do, and are able to provide a safe environment and the specialized level of care vital to pregnant women attempting to overcome an addiction.