How Is Liquid Methadone Abused?

Methadone is an opioid medication with a long half-life that can be used to treat opioid dependence and addiction to shorter-acting opioids, such as heroin, fentanyl, or prescription pain relievers like OxyContin (oxycodone) or Vicodin (hydrocodone/acetaminophen). It comes in pill form marketed as Dolophine, in a dispersible tablet (which is to be dissolved in water and then taken orally), as a wafer marketed under the brand name Diskets, and as an oral suspension, or liquid, form marketed as Methadose.

Methadone is a full opioid agonist, meaning it has abuse potential, causing a “high” when misused, and it is also considered to be addictive. Methadone tablets come in doses of 5-10 milligrams each while the liquid form contains 10 milligrams per milliliter. Both are to be taken orally, usually once or twice per day to manage opioid cravings and withdrawal symptoms.

Methadone abuse is highly dangerous. It can lead to addiction and even death, especially when mixed with other drugs and/or alcohol. 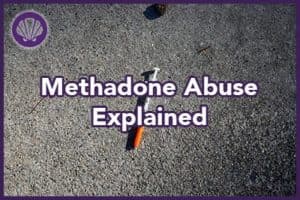 Methadone, as an opioid drug, causes changes to brain chemistry that can lead to drug dependence and become habit-forming. Methadone abuse may begin due to a difficulty to control dosage and use of the drug once a physical and psychological dependence on the drug has formed with regular use. Even though the drug is used to manage opioid dependence, it can still be a drug of abuse and lead to addiction in and of itself. The National Survey on Drug Use and Health (NSDUH) Data Review publishes that close to 500,000 Americans abused a methadone product in 2015.

Methadone stays in the body for up to a day, relieving pain for as long as 4-8 hours after taking it. The Substance Abuse and Mental Health Services Administration (SAMHSA) warns that methadone can remain active in the body for longer than some of the effects of the drug, increasing the risk for overdose or an adverse interaction with any other introduced substances.

Methadone may be abused with other drugs or alcohol to intensify the high or in an attempt to counteract the depressant effects of the drug. Combining methadone with other drugs is extremely hazardous, however, and can lead to overdose and death. If methadone is mixed with another central nervous system depressant, such as alcohol, a sleeping medication, another opioid, or a benzodiazepine, this can lead to complications that can become life-threatening, such as significant respiratory depression, irregular heart rate, increased sedation, and coma.

Signs of a methadone overdose include:

A methadone overdose is a serious medical emergency and requires immediate medical intervention. Abuse of methadone in any form can be incredibly risky, and the ease with which liquid methadone can be abused makes overdose more likely. If you, or someone you love, have been abusing methadone, professional assistance is needed.