What Is Methadone Tapering?

The National Survey on Drug Use and Health (NSDUH) reports that in 2016 around 2.5 million adults in the United States struggled with addiction involving an opioid drug, such as a prescription painkiller (e.g., oxycodone, fentanyl, or hydrocodone) or heroin. Opioids are powerful drugs that interfere with normal brain function.

When a person takes an opioid, it binds to opioid receptors in the brain. Pain sensations are blocked, and a rush of the chemical messenger dopamine creates a feeling of pleasure and relaxation. With repeated interaction in the brain involving an opioid drug, brain chemistry can actually be altered. The brain will not make and recycle dopamine in the same way, for instance. When the drug then wears off, it can take some time for the brain to regulate itself. In the meantime, levels of dopamine can drop, leaving a person feeling physically sick and emotionally distressed. This is known as withdrawal.

Opioid withdrawal can be difficult and intense; therefore, it is not generally recommended to stop taking opioids suddenly, or “cold turkey.” Instead, short-acting opiates, such as heroin and fentanyl, are often replaced with a longer-acting one like methadone. Methadone has an extended half-life of around 24 hours for a person who is opioid-tolerant, the journal Pharmacy & Therapeutics publishes. Methadone can then be substituted for a shorter-acting opiate and then slowly weaned off to minimize withdrawal. This is called tapering.

A taper can keep withdrawal symptoms and cravings from becoming as intense while allowing the brain time to reset itself and heal from the impact of opioid drugs. A methadone taper is often part of a medical drug detox program.

Methadone Tapering and Alternatives during Detox 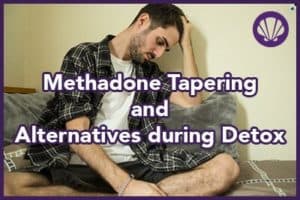 Methadone is an FDA-approved medication for treating opioid dependence and addiction, and it is optimally used in conjunction with therapeutic techniques. Opioid drugs are highly addictive, as the American Society of Addiction Medicine (ASAM) warns that nearly one-quarter of all people who use heroin will suffer from opioid addiction. Part of the reason opiates are so addictive is due to their significant withdrawal side effects that can include flu-like physical symptoms as well as insomnia, depression, anxiety, difficult mood swings, and cravings. As a result, it can be incredibly difficult to stop taking an opioid drug.

Methadone can be used to replace another opioid agonist, and the dosage of methadone can be slowly tapered down over a set period of time to limit the symptoms of opioid withdrawal. The actual methadone tapering schedule and dosage amount will vary depending on the person, the drug abused, method of abuse, length of time used, amount abused, the presence of any co-occurring medical or mental health disorders, and potential polydrug abuse.

In general, a typical methadone taper reduces the dosage around 20 percent every two weeks as tolerated by the individual. Methadone is a full opioid agonist, and as such, it still has the potential to be abused and can result in difficult withdrawal symptoms in and of itself. Alternatives like buprenorphine, which is only a partial opioid agonist, are often beneficial in place of methadone during medical detox.

Buprenorphine can also be combined with naloxone, an opioid antagonist, that is activated if a person attempts to misuse the medication. Antagonists serve to block the agonist effects of the opioid, disrupting a potential “high” and also inducing precipitated withdrawal, which can be intense and undesirable. Buprenorphine dosage can also be slowly lowered over time during a controlled taper to manage opioid dependence and withdrawal symptoms.

A methadone or buprenorphine taper, when used as part of a full opioid addiction treatment program, can help a person to get off methadone and other opioids safely. Such a taper can keep withdrawal symptoms and cravings under control to minimize relapse.