New technologies have had a profound impact on our exposure to everything from content to how we shop for new things. It can certainly seem like everything is readily available to us with a simple swipe or click, and with companies like Amazon reporting astronomical amounts of new users, innovations in convenience are changing the landscape for our accessibility to products and services – and drugs are no different.

2017 was the worst year ever for drug overdose deaths in America. By observing the advances in convenience, the team at Laguna Treatment Hospital wanted to see the current landscape regarding access to drugs. We surveyed over 1,000 people to see just how convenient access to illicit drugs may actually be. Keep reading to see what we found out.

Looking at the Big Picture 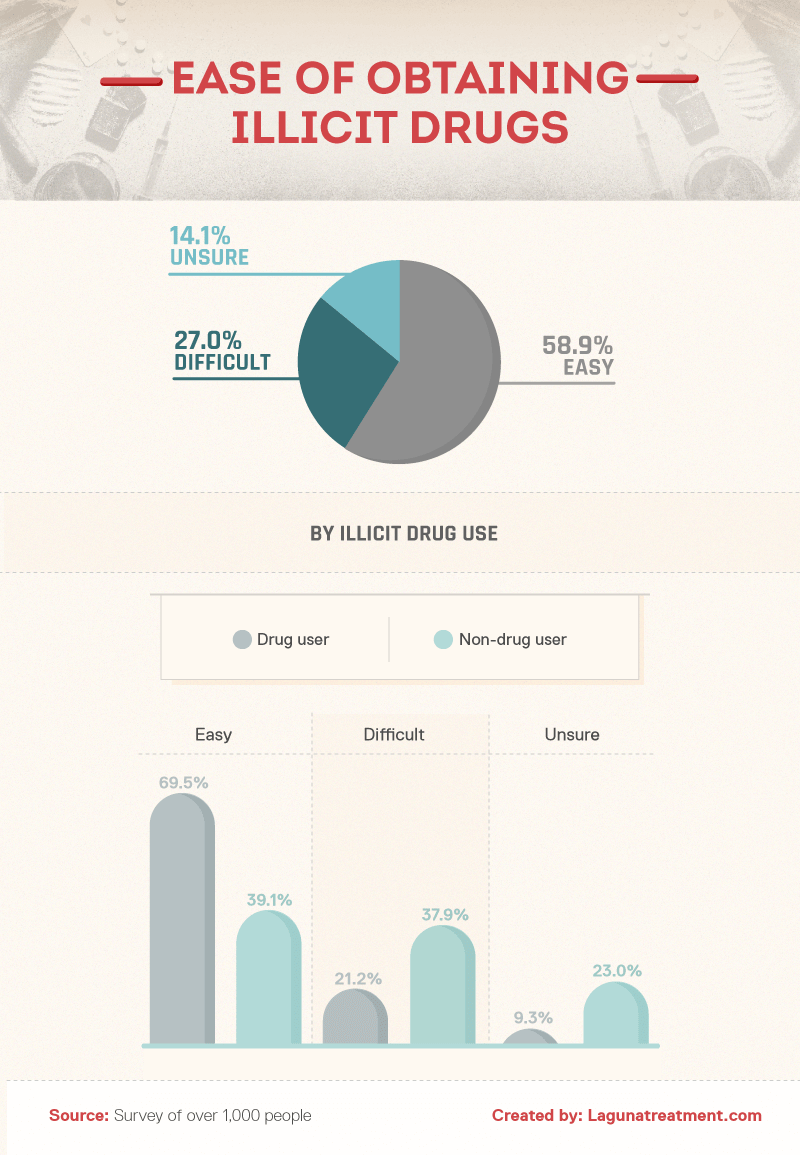 As an overall measure of where America stands on accessibility to illicit drugs, we decided to take a general look across all our respondents, including a comparison of those who admitted to having used illicit drugs and those who hadn’t. Overall, 59 percent of people said obtaining illegal drugs was easy. With easy accessibility to drugs being so prevalent, it’s not a surprise that entrepreneurs are flocking to the opportunity. This could be creating a positive feedback loop, allowing for more businesses to offer drug-based services.

Every day in the U.S., about 7,800 people try illicit drugs for the first time, and roughly 50 percent of those people are teenagers. When 60 percent of the population say access to drugs is easy, the barrier to entry for new users weakens.

The numbers dramatically changed when we segmented our respondents by illicit drug users and non-drug users. Nearly 70 percent of people who admitted to having used illicit drugs said they had easy access to them. For those who had not used illegal drugs before, there was a relatively even split among respondents who reported “easy” or “difficult” access to drugs, 39 percent and 38 percent respectively. While these numbers seem low, this still means nearly 4 in 10 people who have never used drugs felt it’d be easy to access them.

Ushering in a New Era 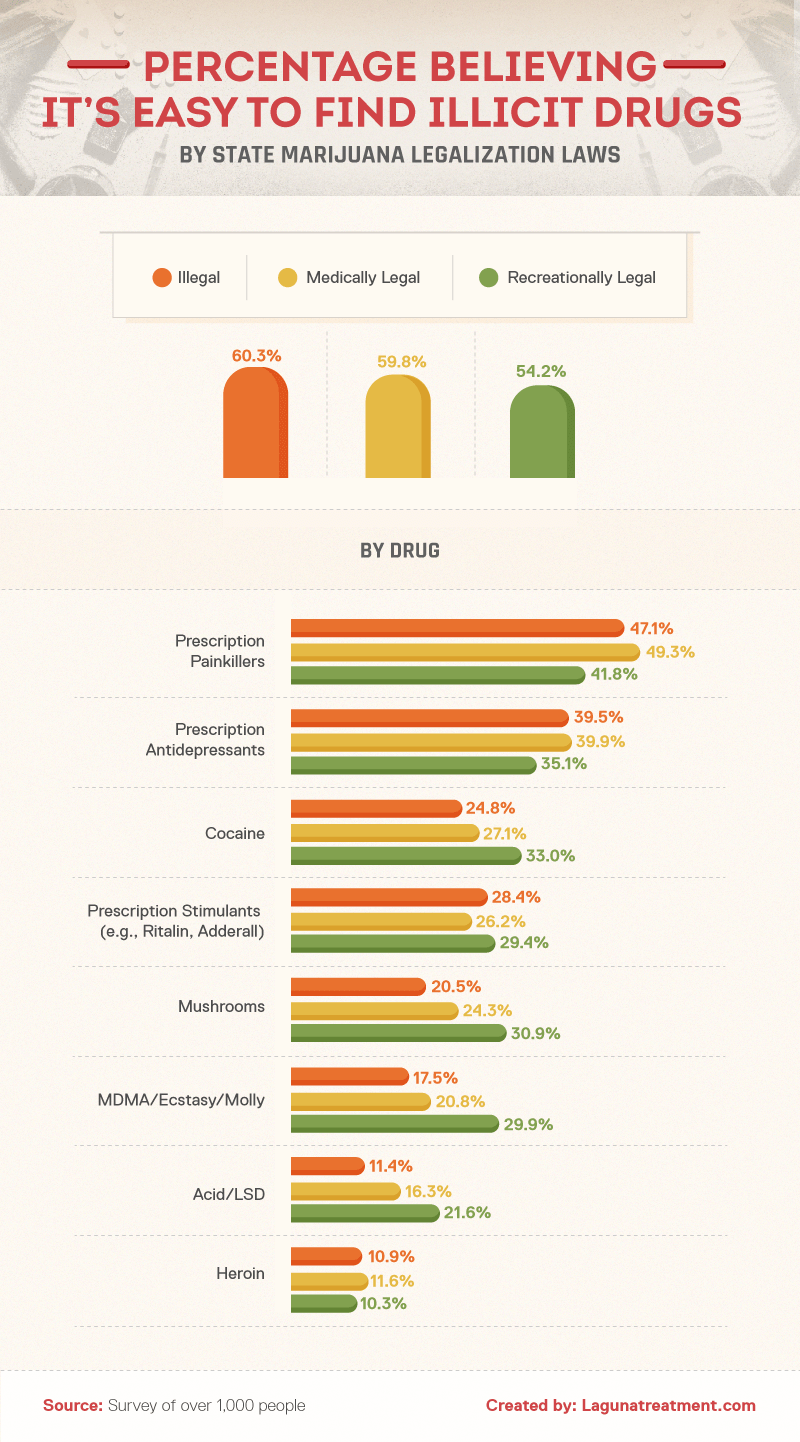 Ushering in a New Era

Medical marijuana is now a household term, 31 states have public marijuana programs, and marijuana in Canada is now completely legal. With so much contention on the subject of legalizing marijuana, we decided to look into Americans’ access to drugs in correlation to the marijuana legality status in different states, and we did indeed find a difference. Respondentsin states where marijuana was recreationally legal were six percentage points less likely to claim illicit drugs were easy to find.

As we went down the list of drugs, the trend changed, and respondents in states where marijuana was legal reported having easier access to a wider variety of illegal drugs including cocaine, prescription stimulants, mushrooms, MDMA, and acid.

Up Close and Personal 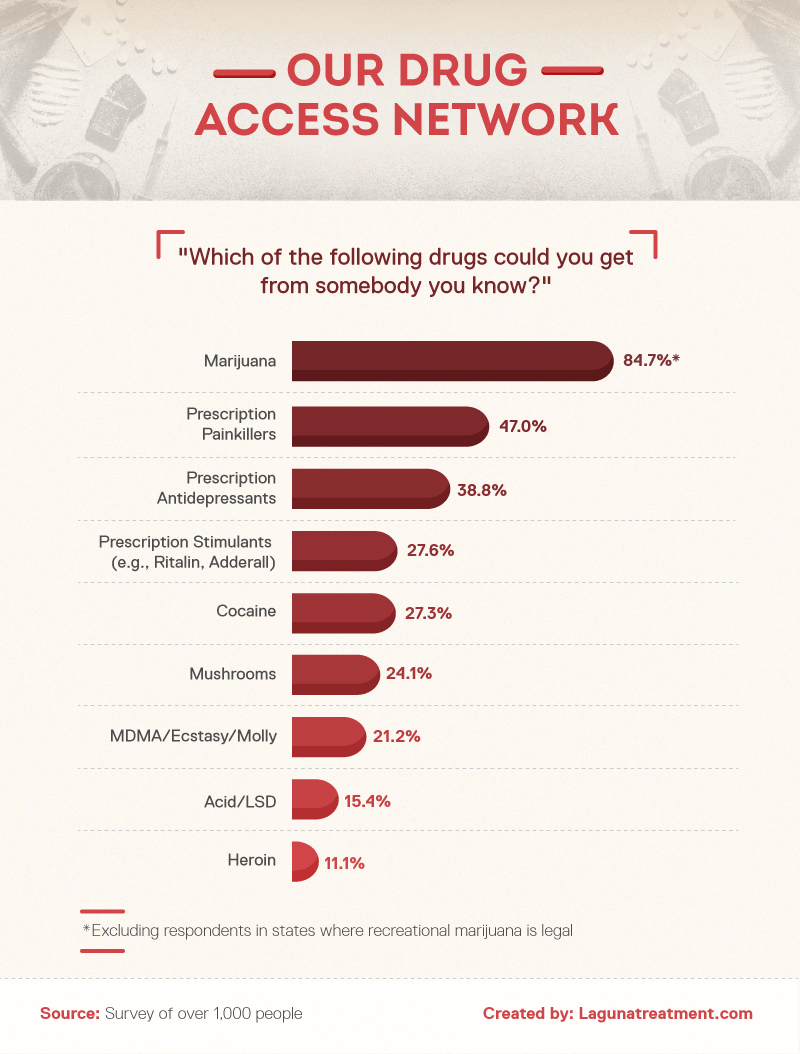 Next, we wanted not just to see the ease of access to different drugs but also the availability of individual drugs overall. While we limited marijuana to only those who lived in states where it remained illegal, close to 85 percent of people said they could get marijuana from somebody they knew. This number does seem staggeringly high for a substance that is still federally illegal.

Roughly 11 percent of people said they knew somebody who could provide them with access to heroin. This paints a dire picture, not just because of the dangers of heroin but also because of the extreme lethality of synthetic opioids, which were involved in nearly 50 percent of opioid-related deaths in 2016 – up 14 percent from 2010. The main culprit? Fentanyl. From 2002 to 2017, there has been a 22-fold increase in the number of overdose deaths related to fentanyl – a drug anywhere from 50 to 100 times more potent than morphine.

But how does a human tragically end up as a statistic in a pool of opioid-related deaths? Prescription opioids may be a start, and our survey found 47 percent of people knew somebody willing to sell them prescription painkillers. This sad statistic is intrinsically related to the number of prescriptions Americans are being given. As the data suggest that heroin users often begin as prescription painkiller users, the outcome could be particularly bleak. 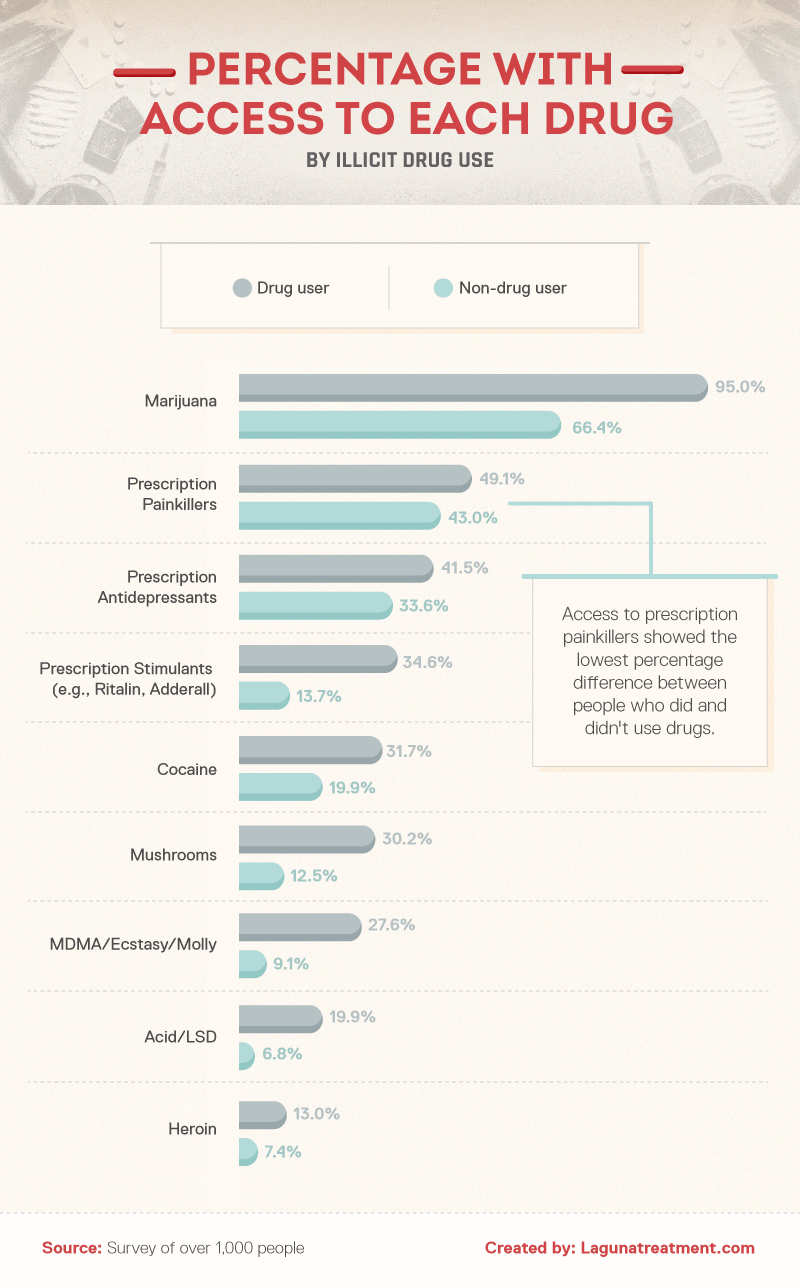 We next looked at drug users and non-drugs users reporting access to specific drugs, and 95 percent of people who’d admitted to using illicit drugs said they had access to marijuana. Over 66 percent of those who hadn’t used illegal drugs echoed its availability. As more and more states decriminalize and even legalize marijuana, it’s important to note studies suggest up to 30 percent of marijuana users will develop some degree of marijuana use disorder.

We further found 43 percent of those who’d not used illicit drugs had illegal access to prescription painkillers. Compare this to 49 percent of people who’d admitted to using illicit drugs, and you have the lowest percentage difference between drug users and non-drug users – meaning prescription painkillers (apart from marijuana) have the lowest barrier to entry for non-drug users but potentially the highest cost to our health.

Our access to drugs is changing rapidly. With advancements in how we exchange money, communicate, and order and receive goods, the landscape of our access to these drugs has never been more dynamic. We are warned that purchasing drugs and controlled substances online may be illegal, yet companies continue to spring up and give people access to drugs in new ways. With a vast number of Americans claiming their ease of access, it’s important to understand the potential unintended consequences of what this convenience may yield, such as the 1 in 10 people knowing someone from whom they can acquire heroin.

Lagunatreatment.com is here to help avert tragedy and educate people on treatment options. Nearly 200 people died every day in 2017 from drug overdoses, and this number is not expected to slow down. This means our access to information must outpace our access to drugs if America is to combat our drug crisis successfully.

To get these data, we ran a survey of 1,013 respondents using Amazon’s Mechanical Turk. We had 479 male respondents and 531 female respondents. Respondents’ ages ranged from 18 to 76 with an average age of 35 and a standard deviation of 11 years. Disqualifying questions and attention checks were used within the survey. For some of the above assets, respondents were grouped into states with varying marijuana legality, our source for attaining that legality was from ncsl.org. States with legal low THC CBD legality were counted as “illegal”.

You’re welcome to share this research on your own channels for noncommercial reuse; if even one person considers treatment as a result, your share will have been well worth it. If you do choose to help spread our content, please link back to this page to attribute our team appropriately.