What Are the Roles of Neurotransmitters & How Do Drugs Disrupt Them? 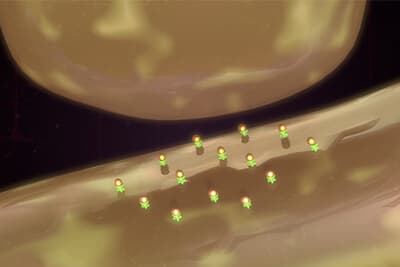 The human body is both wildly complex and masterfully delicate. Each system works in harmony with the others, keeping us alive, helping us think, and triggering our feelings in remarkable ways. At the top of it all (figuratively and literally) sits the brain, the organ that directs all our thought processes and controls every move we make.

With every breath, step, or bite of food, our brain takes in stimuli to help it learn about and respond to the present moment. But just how does it learn? After all, a brain can’t move through the body and see things. How does it know when our stomachs are empty, or when we’re feeling anxious and stressed?

The answer lies with neurotransmitters. These are chemicals that direct messages from one cell to another, conveying information about the body to the brain. There are over 100 unique types of neurotransmitters in the body, but they can be categorized into a few main types, like:

Neurotransmitters play an important part in all physical processes. They also play a large role in emotional health, as many of them cause either a sedative or stimulative effect on the body. For example, GABA (gamma-aminobutyric acid) and serotonin trigger feelings of calm in the body while dopamine and norepinephrine tend to cause excitement.

What Do They Do?

As Integrative Psychology explains, the human brain is made up of billions of nerve cells constantly connecting with one another to take in information and keep the body functioning. However, these nerve cells (also called neurons) are not in direct contact with one another; they gather information through chemical messages that are delivered as we encounter stimuli.

In delivering these messages, neurotransmitters help to regulate just about every function in a person’s life; the sleep cycle, pain threshold, cognitive function, and emotional state are all subject to messages by neurotransmitters. For this reason, neurotransmitter imbalances can contribute to a variety of mental health problems like depression, ADHD, and addiction.

When someone uses drugs, the substance activates the neurotransmitters. Their response is, ultimately, what causes the euphoric “high” feeling associated with drug use. Different drugs cause different neurotransmitter response, which explains why no two drugs yield the exact same effect.

While the total number of neurotransmitters in the brain is still unknown, scientists (like the people at MIT Medical) have a solid understanding of how drugs affect the most well-known neurotransmitters.

For example, the active ingredient in cannabis, tetrahydrocannabinol (or THC), binds to cannabinoid receptors in the body. Cannabinoid receptors are part of the endocannabinoid system, which helps mediate physical processes like pain reception, hunger, and memory. Activating these receptors causes feelings of calm and happiness, but also impairs memory and cognitive function.

Benzodiazepines like Ativan or Valium activate the GABA-A receptor, which in turn increases the body’s gamma-aminobutyric acid levels. This amino acid and neurotransmitter can calm muscles and induce sleepiness, which is why some individuals are prescribed benzodiazepines to treat insomnia or anxiety disorders.

Stimulants like cocaine affect the 5-HT, NE, and DA receptors. These neurotransmitters increase serotonin levels in the body, which creates feelings of happiness and euphoria. The NE receptor also affects the sympathetic nervous system, which raises heart rate, dilates the pupils, and generally causes feelings of adrenaline and wakefulness.

Even drugs that seem completely safe have an impact on neurotransmitters. Caffeine, for example, activates the adenosine receptors, which regulate neurotransmitters like dopamine and glutamine. As a result, caffeine can promote feelings of wakefulness and alertness, and even suppress pain from headaches, though it can also cause headaches and induce anxiety upon withdrawal.

Anytime someone uses a drug (whether it is prescribed by a doctor or taken illicitly), they are disrupting their body’s natural neurotransmitter response. Sometimes, this can be a good thing; someone with a mood disorder may need enhanced GABA levels to keep calm, and someone who had a terrible night’s sleep can use some caffeine for a morning boost.

However, neurotransmitter disruption can be dangerous if it occurs in an unsafe environment and with unsafe substances. If individuals overdose on a substance or are impaired past the point of rational decision-making, they will find themselves in serious and potentially fatal situations. The National Institute on Drug Abuse also points out that neurotransmitter disruption can cause long-term or permanent damages to the brain.

The brain is our most complex organ, and it’s also a critically important one. Neurotransmitters are vital cogs in the machine of our brain, helping to relay messages and keep our bodies running effectively. However, when we introduce drugs into the system, it disrupts these pathways and interferes with the way the body and brain communicate. This can lead to devastating results, including death. This is why individuals struggling with drug abuse should seek professional treatment as soon as possible; their lives are on the line.