A drug’s chemical composition contains the mystery of its history – from the secrets of its creation to the substances with which it’s been cut. For casual and dependent users alike, these details of chemistry remain dangerously unclear: You can never truly know what you’ve just purchased.

But for law enforcement officials dedicated to drug interdiction, testing the substances they’ve seized yields valuable clues about the dynamics of drug trafficking in America. The Drug Enforcement Administration keeps detailed records of the purity of drugs they’ve confiscated and discloses this information to the public each year. In this project, we’ve used these DEA data to track geographical differences in drug purity across the country. We’ve explored how drug purity data might shed light on a range of topics, from overdose deaths to street-level prices. To learn more about the purity of the substances fueling America’s drug epidemic, keep reading. 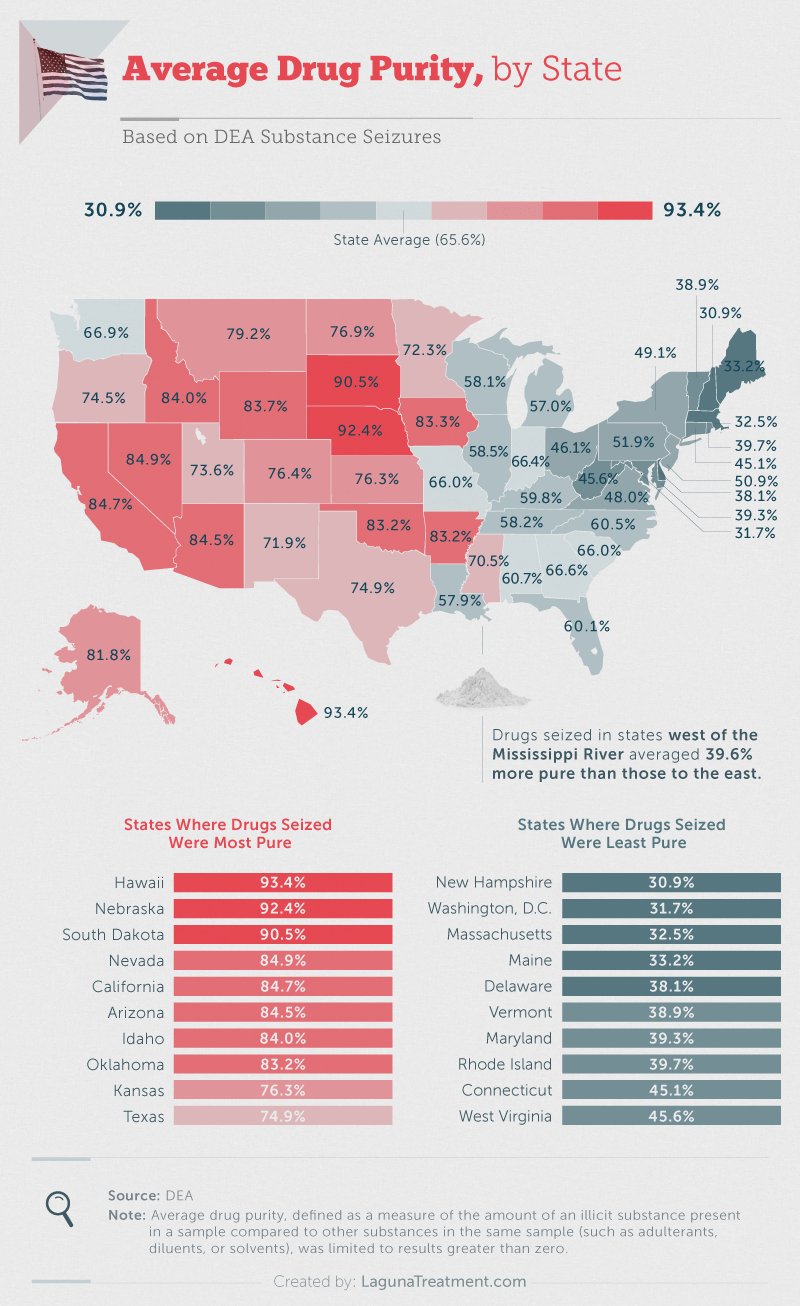 DEA drug purity testing reveals a nation divided: On average, drugs seized west of the Mississippi River were nearly 40 percent purer than those confiscated in Eastern states. Although these findings might be interpreted in many ways, it’s possible drug purity throughout much of the Western U.S. stems from the proximity to Mexico. More than 90 percent of heroin sold domestically comes across the southern border, and Mexican cartels have moved into mass production of methamphetamine as well. Perhaps as drugs drift further east, away from their point of origin, they are more likely to be diluted by middlemen before reaching retail consumers.

Interestingly, however, many states where drug purity was highest boasted few urban centers typically associated with drug trafficking and accessibility. In Hawaii, Nebraska, and South Dakota, drugs were more than 90 percent pure on average. It’s worth noting methamphetamine is a particularly severe problem in these states, and that drug’s purity has risen steadily nationwide in recent years. Conversely, interdiction efforts in New Hampshire likely reflect the urgent local threats of heroin and fentanyl, drugs that tend to be heavily diluted with additive substances. That dilution does not equate to greater safety – it may even lead to greater loss of life. 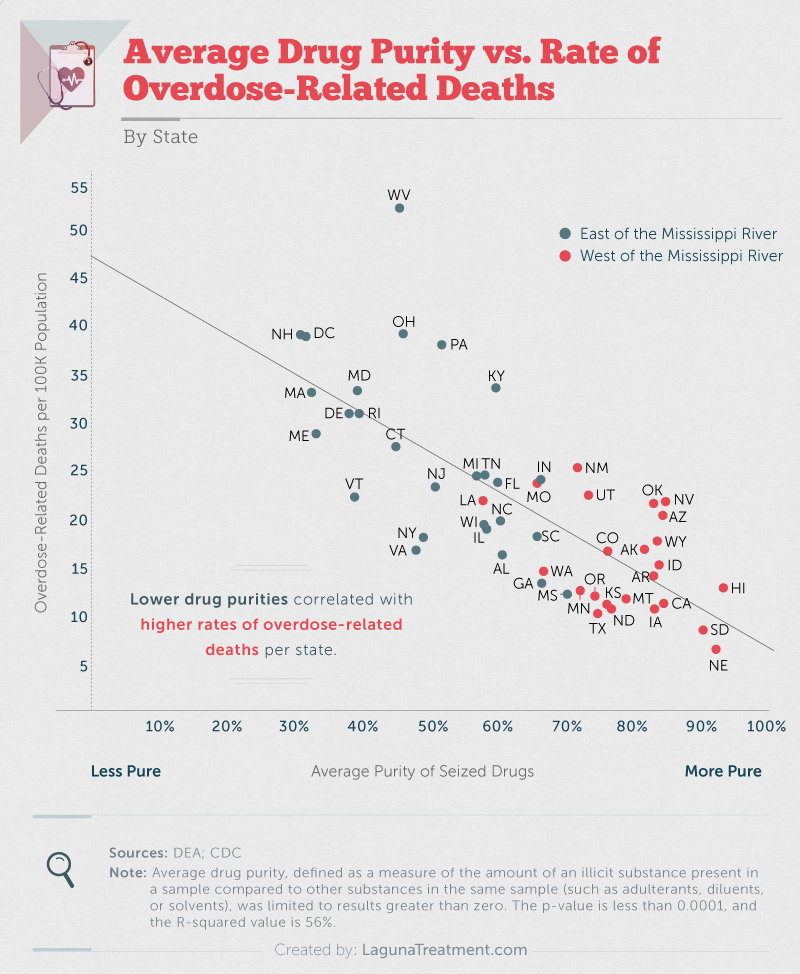 At first, the correlation seems counterintuitive: Why would Western states with higher-purity narcotics witness fewer overdose deaths per capita? One might be inclined to blame the substances with which drugs are cut, which range from ordinary (baby powder) to appalling (rat poison). But while it’s true substances commonly used to dilute drugs can be harmful if ingested in large quantities, it’s unlikely dangerous additives account for the entirety of this trend.

Rather, overdoses often occur when a substance is far purer than a user anticipates, overpowering the tolerance they’ve developed for more diluted forms of the drug. In states where substance purities tend to be consistently high, deviation from the norm might lead to dissatisfaction and swift withdrawal. But in places where drugs are usually diluted, an especially strong batch could prove deadly.

On the other hand, the correlation between overdose and impurity could speak more to substance-specific challenges in each state. Opioids and heroin account for far more overdosesthan cocaine and methamphetamine annually, and they also tend to be less pure as discussed above. Accordingly, states in which heroin and opioids pose an urgent threat would logically have both higher rates of overdoses and lower rates of drug purity. In this interpretation of the data, opioid overdose capitals such West Virginia, Ohio, and New Hampshire could serve as prime examples. 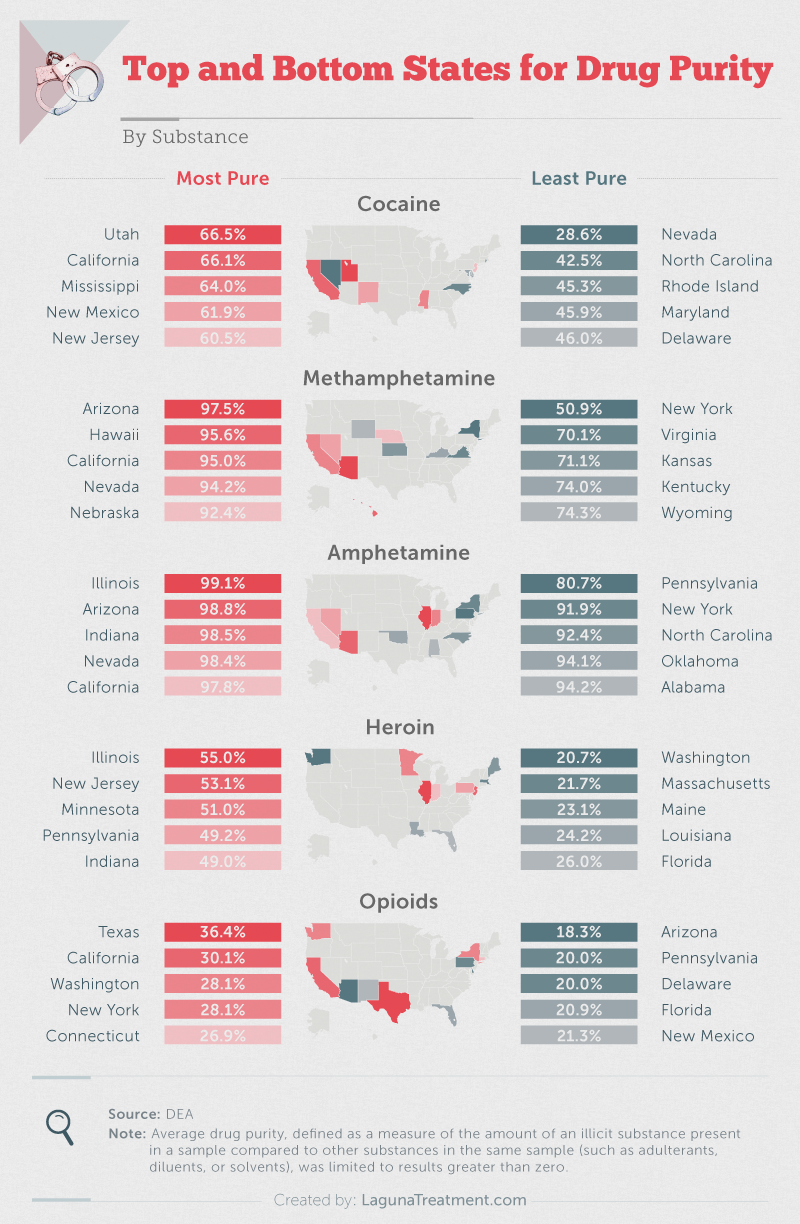 When we consider which states possess the highest levels of purity for each substance, we reach some surprising conclusions with deep implications for the American drug trade. Utah, for example, leads all other states in average cocaine purity – but authorities say many seizures in the state occur on major highways as traffickers attempt to transport drugs to their real destinations further east. Similarly, California was among the top states for the purity of several substances, including methamphetamine and opioids. That could be because California remains a point of entry for narcotics from Mexico, and drugs seized so close to the source have a potential likelihood to be purer.

The states with the highest rates of heroin purity, however, were concentrated in the Midwest and East Coast regions. As the DEA report notes, these markets typically consume white powder heroin, and increased poppy cultivation in Mexico will ensure the drug remains intensely potent in these areas in the years to come. Meanwhile, Arizona had the highest rate of methamphetamine purity – the state’s border with Mexico has been the site of a recent surge in trafficking activity and law enforcement seizures of the drug.

Stepping away from regional juxtapositions, we find some drugs tend to be purer than others overall on a national scale. In some cases, high rates of purity have distinct explanations: Adderall is a prescription stimulant manufactured in the form of a pill, so there’s little potential to dilute it. Methamphetamine purity is likewise attributable to another large-scale manufacture: the consistency of Mexican cartels. Whereas meth was once made primarily by small labs dotted throughout the country, increased enforcement efforts have virtually eliminated these small-time domestic operations. Drug cartels have leapt into that vacuum, supplying meth that’s cheaper and purer than ever before.

As discussed earlier, opioids typically exhibit far lower rates of purity. This was especially true for fentanyl – likely for practical reasons related to its potency. A lethal dose need be no larger than a quarter of a milligram, so it would be virtually impossible to use in its unadulterated form without overdosing. 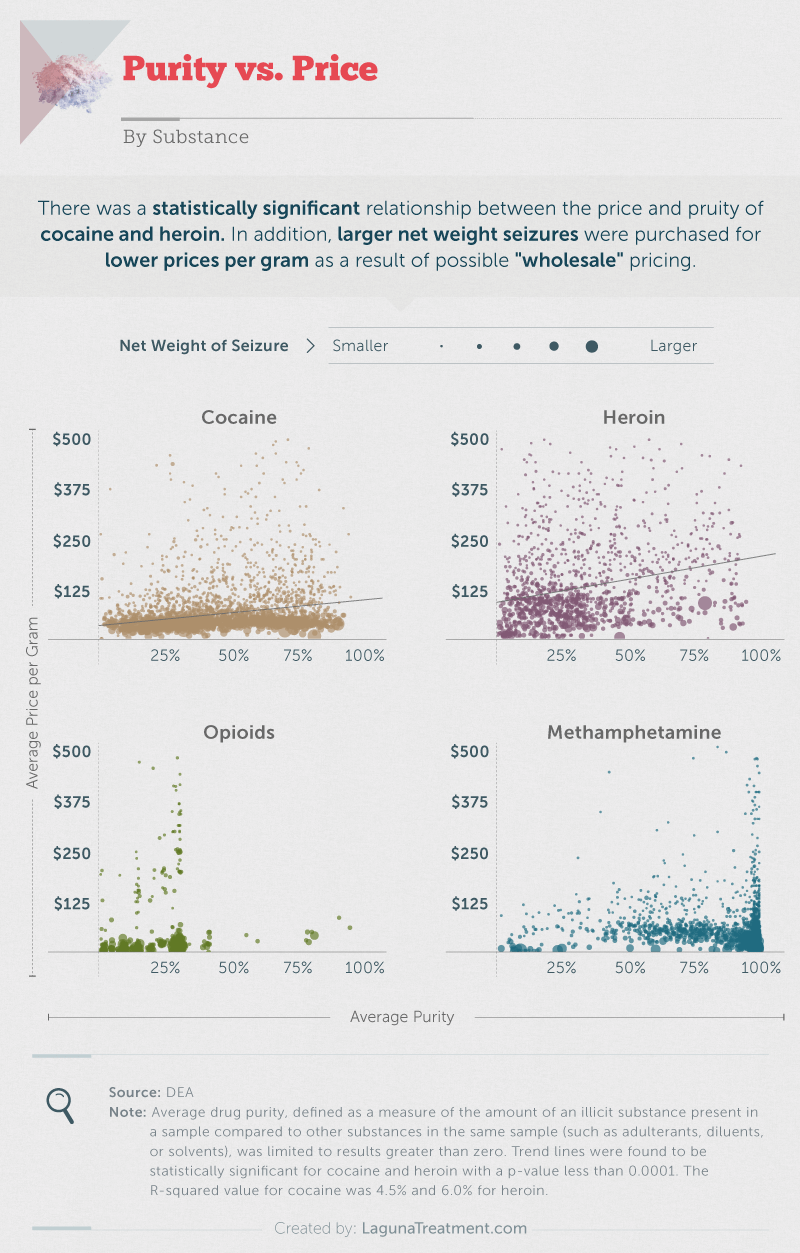 Does a purer product fetch a higher price? Although local market forces probably contribute to regional differences in the street-level costs of narcotics, one might assume users would pay more for few additives overall. This assumption was supported by our data on cocaine and heroin seizures, where we found a statistically significant correlation between purity and price per gram. Generally speaking, heroin values were slightly higher and substantially more varied. But records for both substances included some outliers, with a couple of seizures entailing per-gram prices more than $500.

Regarding opioids and methamphetamine, however, we could not find a statistically significant correlation between purity and price. In the case of opioids, few seizures were 80 percent or more pure (the quality that might justify a higher market price). Conversely, the majority of meth seizures were at least 50 percent pure, although prices varied widely for the highest-purity forms of this drug. 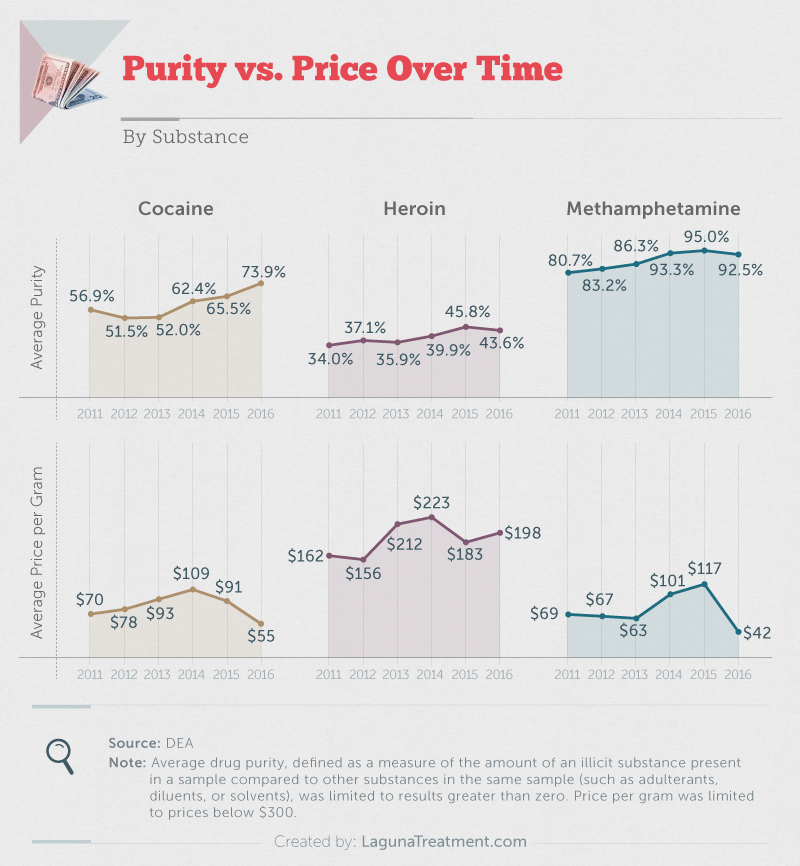 If the relationship between price and purity is inconsistent in recent seizures, the historical dynamic seems even more complex. In the case of cocaine, for example, purity significantly increased between 2013 and 2016 – and average prices plunged during that period. Many attribute this sudden surge in purity and decline in price to a production surplus in Colombia. In response, the country’s government has committed to more aggressive anti-narcotics efforts.

Heroin price and purity statistics have fluctuated to some extent since 2011, often diverging in odd ways. In 2015, heroin purity substantially increased over the year before, but its price declined precipitously over that same period. Methamphetamine prices saw the single greatest year-over-year drop, falling from $117 per gram in 2015 to $42 in 2016. Local authorities in meth-stricken states have noted a massive supply relative to existing demand, which might explain this extreme price decline.

Our findings reveal vast variations in drug purity, both regarding regional contrasts and differences among substances. This evidence of varied potency confirms one of the fundamental dangers of drug use: Before exposing your body to an illicit substance, you rarely know what it truly contains. These results suggest the content and power of a given drug can change quite quickly, leaving users vulnerable to injury and overdose. These are some of the dangers of dependence: You stake your health on a substance you can’t quite trust.

If you or someone you love needs treatment for substance misuse, you shouldn’t have to gamble on getting high-quality help. The search for the right care can seem completely overwhelming, but our team at LagunaTreatment is here to help you choose the right path to sobriety. Information is power in the search for recovery resources, so explore our site today to learn how evidence-based treatment changes lives.

We collected DEA substance seizure data from a completed Freedom of Information Act request published on Aug. 29, 2017. Data contain all domestic drug seizures for fiscal years 2011 through 2016, totaling 54,270 records. We used data related to the state in which the substance was obtained, the method of acquisition, the drug name, net weight, purity, calendar year collected, and cost.Analysis related to average purity excluded seizures in which purity was recorded as zero. Average drug purity by substance was limited to results with 20 or more records. Analysis related to average purity by state was limited to results with 25 or more records. Price per gram was calculated by dividing the price by seizure net weight. Analysis related to average price per gram excluded results that exceeded $2,000 per gram.

Substances were categorized and grouped by their drug name.

Please feel free to share our information and graphics on the state of drug purity in America with your own digital audience, so long as you do so for noncommercial purposes. If you do use our work, please hyperlink to this page to attribute us properly and let your readers explore our project in its entirety.