I’m Addicted to Heroin, but Afraid of Being Dope Sick 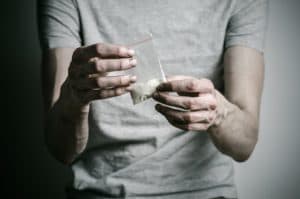 Heroin is a highly addictive opiate derived from morphine, which is a naturally occurring substance that can be found in the seedpods of poppy plants.

According to the National Institute on Drug Abuse (NIDA), it is typically sold to users in the form of powder, and it’s often cut with starch, sugars, quinine, or powdered milk. Pure heroin can be smoked or snorted, which is why it tends to be appealing to new users who may be averse to the stigma associated with injectable drugs. Impure heroin — which is what users often have to purchase if their addiction takes hold and they run out of money — is usually diluted or dissolved and injected directly into a vein or muscle to increase the potential high.

A heroin high mimics the feelings produced by a rush of endorphins, including euphoria and total relaxation, and an estimated 23 percent of people who try it quickly become dependent on it, according to NIDA.  In fact, heroin and prescription opioid abuse is so prevalent in American society today that the White House reports President Obama is seeking $1.1 billion in funding for fiscal year 2017 to fight the epidemic. Indeed, nothing is scarier than watching a loved one succumb to heroin addiction; however, it’s important to remember that it’s never too late to seek help, and there are ways to treat addiction. It may be frustrating if a loved one seems hesitant to start detox and treatment, but a closer look at the reasons why could be quite illuminating and help family members empathize.

The Most Addictive Substance on Earth

David Nutt, a neuropsychopharmacologist and psychiatrist, led a team of researchers in ranking the most addictive substances on earth, and perhaps unsurprisingly, heroin came in at number one. They published their findings in the Lancet and gave heroin a score of 2.5 out of 3 based on factors like how much it activates dopamine in the brain, how easily it is to get hooked, how severe withdrawal symptoms are upon stopping use, and how much harm it can cause. For reference, alcohol ranked second, with a score of 2.2, followed by cocaine, barbiturates, and finally, nicotine.

If a loved one is struggling to stop using heroin, it’s likely a combination of just how addictive the drug actually is coupled with the fear of how bad withdrawal is going to be. There are ways to manage even the most severe withdrawal symptoms, though, as long as medical intervention is readily accessible. Recovery programs have teams of experienced professionals ready to treat any withdrawal complications that might arise, making medical detox an appealing way to attempt sobriety.

As with any addiction, the intensity, duration, and ultimate resolution of detoxing from heroin is going to vary among individuals. Factors that affect the withdrawal timeline include age, total usage, and length of the addiction. For example, those who have been using heroin for a significant period of time and in large amounts are likely going to experience a longer withdrawal period those who haven’t; however, detox generally only lasts for up to seven days.

Acute heroin withdrawal symptoms typically surface within 6-12 hours of the last dose. They tend to persist for 1-3 days and peak after approximately 72 hours, until symptoms finally subside over the following 2-4 days. A more detailed timeline looks like this:

Because withdrawal symptoms can vary depending on the extent of the addiction, it is critical that anyone who plans to stop using heroin seeks medical intervention. In a medical detox program, those who have developed a dependence on heroin will have access to a fully trained staff who can help them get through the most uncomfortable parts of withdrawal. Unfortunately, it is not possible to stop using heroin without going through a detox phase; however, with the right approach, the physical symptoms can be manageable. Of course, one of the reasons quitting heroin is so challenging is that the craving for it will likely remain even after the detox phase has passed.

When the Worst Is Over

Heroin alters circuitry in the brain, which can affect behavior and emotions long after an individual has stopped using the drug. Changes in the nervous system can last beyond the detox phase and manifest themselves in protracted withdrawal, a condition that occurs when symptoms persist beyond the usual withdrawal timeline. According to the Substance Abuse and Mental Health Services Administration, symptoms of protracted withdrawal are treatable and include:

It is important to keep in mind that these symptoms will not last forever, and there are natural ways to treat them. For example, a report published in Evidence-Based Complementary and Alternative Medicine determined that acupuncture can be an effective treatment for protracted withdrawal symptoms following opiate addiction, and a 2013 study published in the Journal of Acupuncture and Meridian Studies found that students who had a 20-minute acupuncture session had less anxiety and better concentration than those who did not undergo acupuncture.

It’s not uncommon for those who have developed a dependence on heroin to focus solely on the withdrawal phase. Reminding a loved one that withdrawal is just one small part of the recovery process may help assuage fears about feeling “dope sick.” Following medical detox, inpatient rehabilitation can prevent individuals from relapsing while giving them tools to ease the psychological symptoms of heroin withdrawal. Residential treatment can also be effective at helping individuals develop coping skills for standing firm when facing the same situations that led them to use heroin in the first place. Most recovery programs finish with an intensive outpatient program, which might include Motivational Interviewing, Cognitive Behavioral Therapy, and other therapies.

The key to kicking any addiction is building a strong support group. With the right treatment program and supportive friends and family, there’s no reason to fear heroin withdrawal. According to a 33-year follow-up study published in the American Journal of Epidemiology, individuals who chose to undergo sustained treatment for their addiction were able to remain clean longer than those who were forced to stop using due to incarceration. Ultimately, quitting heroin is up to the individual, but family and friends can make it far easier by encouraging treatment and supporting their loved one in recovery.