What Is Promethazine, and How Can It Be Abused?

Promethazine was developed in the mid-1940s when a team of scientists from the French chemical manufacturing company Rhône-Poulenc combined phenothiazine and a diamine side chain of diphenhydramine to create a new drug. Their creation, promethazine, is a synthetic medication that belongs to a pharmaceutical family known as phenothiazines.

As a medication, promethazine has several uses, including treating allergies, motion sickness, and more. It is also a strong sedative that is sometimes prescribed during labor, before and after surgery, and at other times.

Promethazine is a first generation antihistamine that is only available by prescription. It effectively treats several conditions, such as:

As an antihistamine, promethazine competes with histamine for binding at some of its receptor sites (H1-receptors), thereby blocking histamine from binding to many. This, in turn, prevents or reduces the typical effects of histamine activating those receptors, including hives, constriction of the airways, nausea, increased wakefulness, nasal congestion, sneezing, and a runny nose. 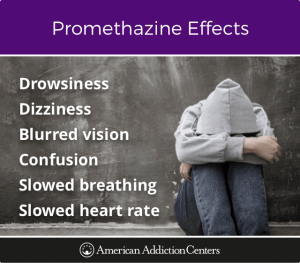 Rare but serious side effects of promethazine include:

How Promethazine Use Leads to Abuse

Although it is not a controlled substance, promethazine does have the potential to be abused. The risk of abuse heightens when it’s combined with codeine, which is a combination used as a prescription medication for cough and upper respiratory symptoms accompanying allergies or a cold. Codeine is an opioid that can alleviate coughing.

Promethazine DM is the combination of Promethazine and dextromethorphan, cough medicine brands such as, Robitussin, Delsym or NyQuil

For someone looking for a way to get high, promethazine with codeine combinations may be easier to access than other opioids that are more carefully controlled. Opioids such as oxycodone and hydrocodone are Schedule II drugs, whereas the combination of promethazine and codeine is a Schedule V drug. Although this lower scheduling means that the medication is thought to have a lower abuse potential, it could make it easier to obtain.

Promethazine abuse can lead to side effects that range from inconvenient to incredibly dangerous. Promethazine overdose can be even more dangerous. Overdosing on promethazine may cause symptoms such as:

Although it is clear that promethazine abuse can be dangerous, there is not much research that offers a clear picture of its addictive potential.


Promethazine Mixed with Other Substances

Furthermore, there is evidence that codeine, which is combined with promethazine in some medications, is addictive. Codeine on its own is a Schedule II substance. This means that it has a high potential for abuse, although it is still medically useful in certain cases. Medications consisting of both codeine and promethazine are Schedule V, meaning they have a lower potential for abuse, but there is still abuse potential and so they are controlled substances.

People who frequently use codeine (with or without promethazine) may develop a dependence on opioids. If they stop using it or drastically decrease their use, they may experience withdrawal. Withdrawal can last several days, and symptoms may include:

If you, or a loved one, are struggling with an addiction to cough syrup or cold medicine, or if promethazine abuse has become part of your or your loved one’s life, it is important to get treatment as soon as possible. In treatment, clients have the opportunity to safely detox from any drugs they are dependent on and to receive treatment for their addiction with therapy and sometimes medication as well. With a strong support network and a commitment to working on recovery, clients can discover a brighter, healthier future – one that is much better than anything addiction to promethazine or codeine could offer.

We encourage you to consider the amenities that Laguna Treatment Hospital, or another American Addiction Centers location, can provide for your journey in recovery from promethazine.

over the countertreatment
Prefer getting help via text?
We're available 24/7 via text message. Signup below for access to our team when its convenient for you!
and many more...
✕
Instantly Check Your Insurance Coverage
Your information is safe & secure
At Laguna, we accept most types of private (non-government) insurance and offer a variety of payment options.
You can quickly and privately check your insurance benefits to see if you're covered for addiction treatment services. We’ll be able to tell you if your provider is in network with Laguna Treatment Center and all American Addiction Centers locations.
This means your treatment may be FREE1 depending on your policy, copay, and deductible.
What's stopping you?You're not defined by addiction. Let's help you get back in control of your life.