Where the Homelessness Population is Increasing in California 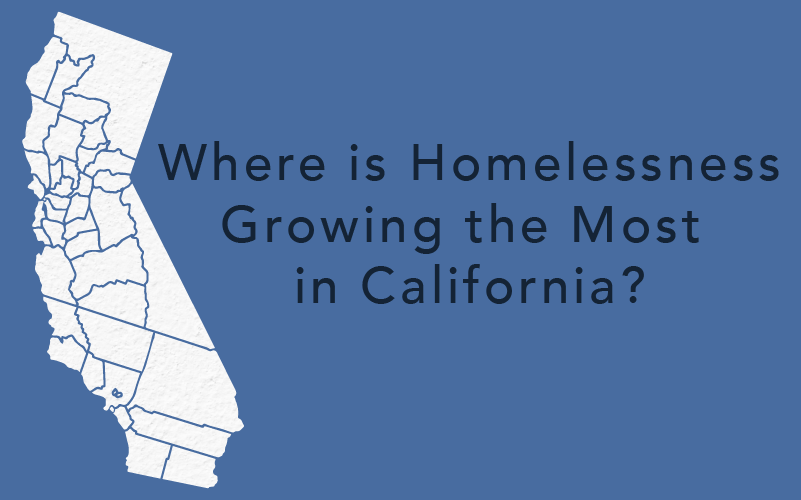 For decades, California lawmakers have struggled to find the best response to the homelessness crisis that is prevalent throughout the state. But, now that it has reached epidemic levels, studies and grassroots efforts have shown that homelessness is not as isolated as an issue as previously thought.

Here at our treatment center in Orange County, CA, we focus on providing individualized therapy and educational tools to aid recovering substance abusers in their rehabilitation. We also know firsthand that substance abuse and homelessness are often related.

Although more recent data is lacking on the subject, in 2003 the Substance Abuse and Mental Health Services Administration estimated that 38% of homeless people were dependent on alcohol, and 26% abused other drugs. This is significantly higher than the general population.

Let’s be clear – not every homeless person has a substance abuse issue or a mental health issue. But studies indicate that substance abuse often leads to homelessness due to the interpersonal, professional, and financial conflicts it is likely to cause. Additionally, people who are homeless often resort to drugs and alcohol to deal with their stressful lifestyle.

Given the co-occurrence of these two issues, we found it vital to dive into California’s homelessness crisis to determine where it is the most severe. This study used data from the Department of Housing and Urban Development (HUD) 2018 Point-In-Time (PIT) estimates by Continuum of Care (CoC) in California to determine the regions, mostly organized by county, where homelessness has grown the most from 2009 to 2018. The results are outlined below.

Areas of California with the Highest Concentration of Homelessness 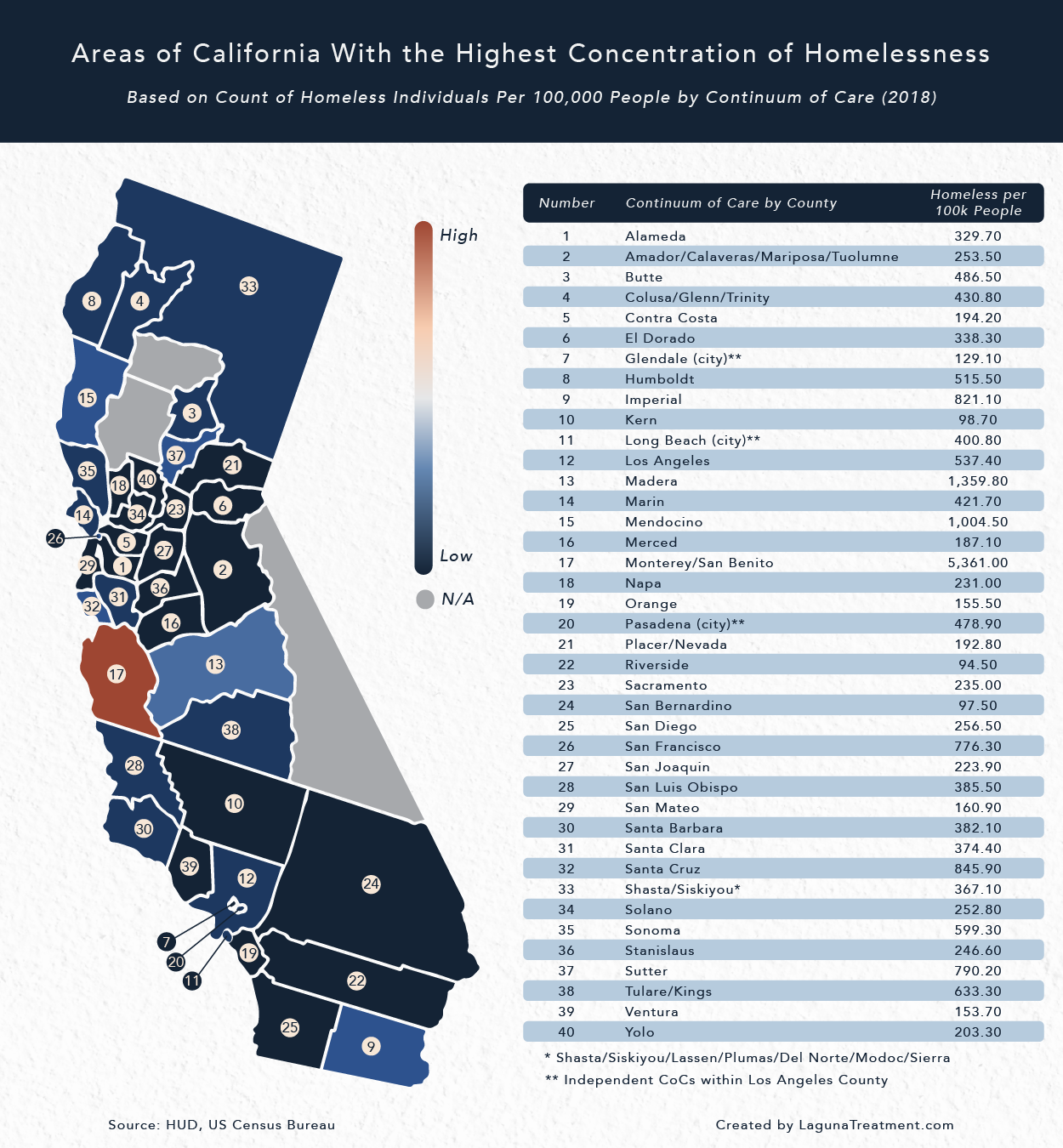 This graphic displays the number of homeless people per 100,000 members of the population of each county or collection of counties covered by a specific CoC. According to our data, the areas with the highest concentration of homelessness include Monterey & San Benito counties, which have a total of 5,361 homeless per 100,000 people.

The homelessness problem in Monterey and San Benito is significantly worse than the close-by, urban San Francisco Bay Area, which has a homeless count of 776.3, due to sky-high rents, low-paying jobs, and high cost of living in the area.

Other areas with the highest concentration of homeless people include Madera and Mendocino counties, with 1,359.8 and 1,004.5 homeless per 100,000 people respectively. Both counties applied together for the Homeless Emergency Aid Program grant funding after declaring homeless shelter crises early this year.

Riverside, San Bernardino, and Kern counties are the areas in California with the least concentration of homelessness, with 94.5, 97.5, and 98.7 homeless per 100,000 respectively. Interestingly enough, Riverside and San Bernardino counties are some of the most populated in the state.

Where is Homelessness Growing the Most in California? 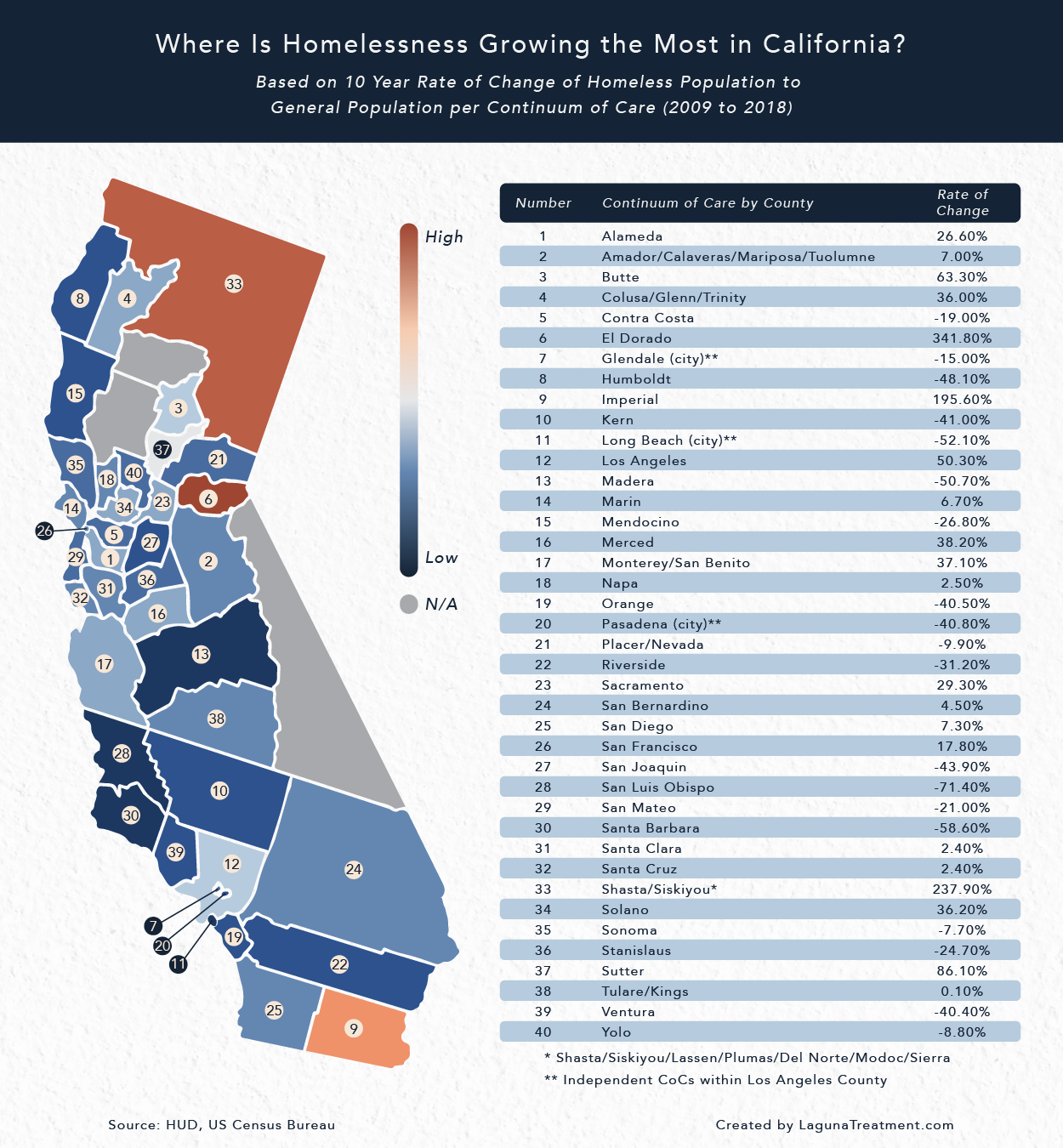 Now, for the central question of our study – where has the homelessness crisis seen the most growth in California over the last ten years?

To answer this question, we calculated the rate of change in homelessness counts over the period 2009-2018, which is represented in the above heat map. Our results indicated that homelessness in California is growing the most in many rural and suburban CoCs, while many suburban and urban CoCs, including, major cities have been able to decrease their homelessness count.

For example, El Dorado County, a predominantly suburban county neighboring Sacramento, has seen the most growth in homelessness, a rate of 33.83% over the last ten years. A group of smaller counties in Northern California combined into one CoC, namely Shasta, Siskiyou, Lassen, Plumas, Del Norte, Modoc, and Sierra counties, has seen the second-highest increase of 367.1%.

Meanwhile, in cities such as Long Beach, homelessness has decreased by 52.1% over the past decade. The areas that have seen the highest decrease in homelessness include San Luis Obispo County and Santa Barbara County, which have seen a decrease of 71.3% and 58.6% respectively. In 2017, San Luis Obispo County Homeless Services Coordinator Laurel Weir credited an increase in housing resources for the decline.

For more information on where homelessness is growing the most in California, please read the below table. We have sketched out all of our results for each Continuum of Care should you be interested in the specific statistics for your county or city. 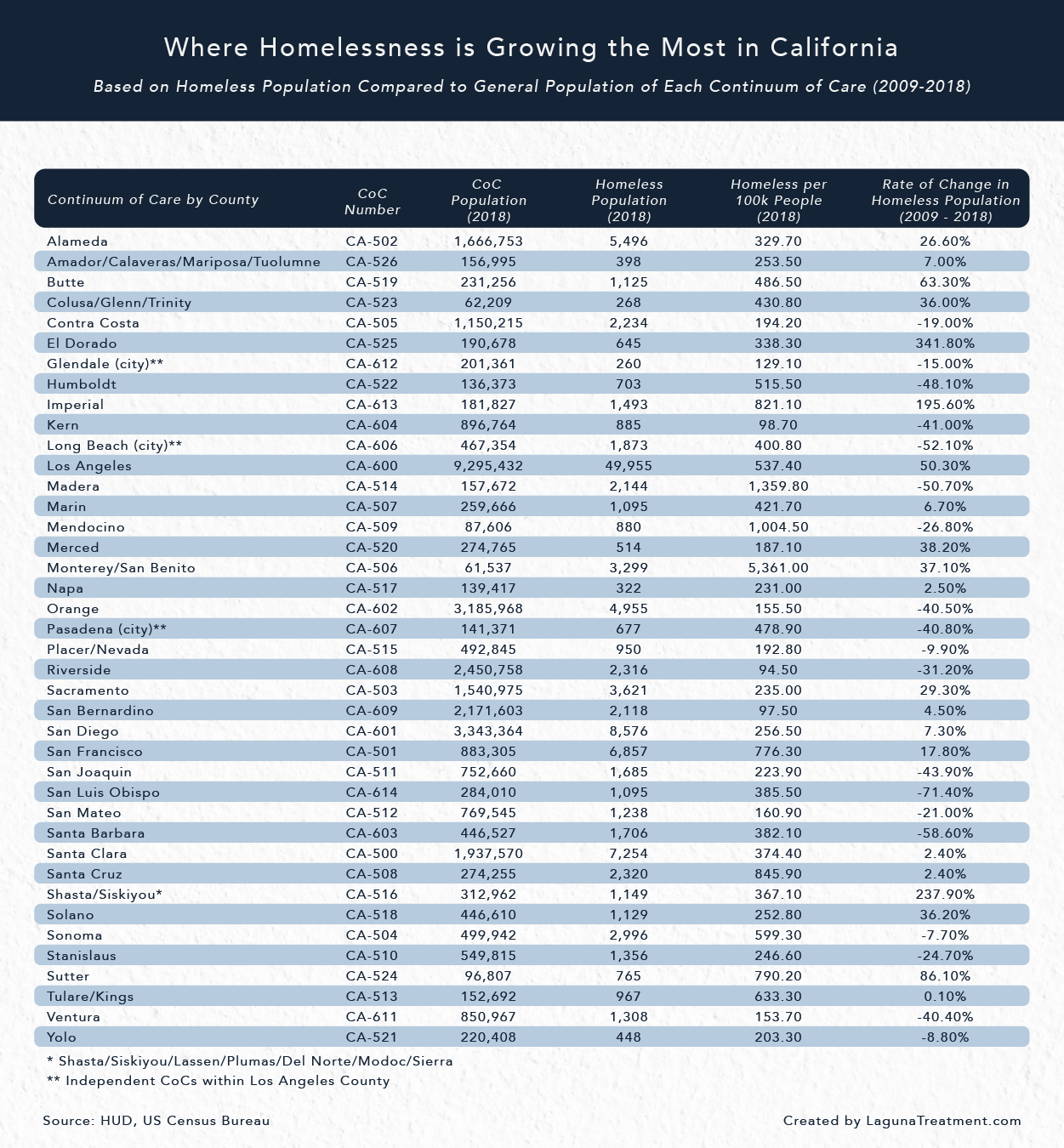 As these statistics demonstrate, homelessness varies in severity throughout California, but it remains a statewide issue. As of January 2018, almost 130,000 people living in California experience homelessness on any given day.

And yet, some areas have been able to greatly decrease their residents’ experiences with homelessness. From these stories, perhaps we can take some hope and inspiration.

If you or someone you know is struggling with homelessness co-occurring with substance abuse issues, please contact us at Laguna Treatment Hospital to begin a rehabilitation plan today.