What Is Losartan, and How Is It Abused?

Losartan medication, also known by the brand name Cozaar, is an antihypertensive in the angiotensin II receptor agonists class. The medication results in blood vessels not constricting, and its action allows for more even blood flow and lowered blood pressure. The medication is typically used to treat:

The medication may have off-label uses as well.
The drug is typically taken orally with the beginning dose of 50 mg once a day. Once the person’s high blood pressure is controlled, it is continued orally at doses of 25 mg to 200 mg once or twice a day. 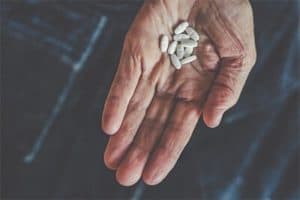 The Substance Abuse and Mental Health Services Administration (SAMHSA) collects yearly data on the use, misuse, and abuse of the numerous drugs and prescription medications. SAMHSA does not report figures for the use or misuse of losartan. While the medication does require a prescription from a physician, it is not listed as a controlled substance by the United States Drug Enforcement Administration (DEA). This indicates that the drug is not considered to be a potential drug of abuse by major organizations and is probably not widely abused.

There is some older data to suggest that elderly individuals may misuse hypertensive drugs, and some newer information also suggests that there may be some potential for misuse of the drug, particularly in elderly individuals, that can lead to problems, such as taking too much of it or taking the required daily dose at one time instead of taking it twice as day as instructed. There is no attainment of specific psychoactive effects, euphoria, energy increase, etc., that is typically associated with the use of this drug; therefore, it is not a drug that is sold on the street as a drug of abuse.

There is data from the Food and Drug Administration (FDA) to indicate that many individuals with substance use disorders suffer from hypertension and may be prescribed losartan. For instance, according to data by the FDA:

Thus, losartan may be a drug that is prescribed to individuals with substance use disorders; however, there is no recognized literature that suggests that it is a significant drug of abuse itself, that its use fosters some other forms of drug abuse, or that it is a potential substance that individuals who are in recovery will use during relapse for its psychoactive effects. In fact, there is a small body of literature that suggests that some antihypertensive drugs may be useful in the treatment of certain forms of substance use disorders, such as alcohol use disorders or cocaine use disorders.

Antihypertensive drugs like losartan often have potential side effects that could be serious, and they may interact with other medications to produce untoward side effects. Thus, these medications should only be used under the supervision of a physician. According to the book The Complete Guide to Prescription and Nonprescription Drugs, some of the more common side effects associated with use of losartan include:

Rare or unpredictable side effects may occur in individuals with certain medical conditions or psychiatric disorders, such as bipolar disorder.

Losartan does have numerous potential untoward interactions with other medications and should only be taken under the supervision of a physician. It is generally not recommended that pregnant women use this medication; however, again, this is up to the discretion of the physician.

In very rare cases, individuals may experience rhabdomyolysis, a condition where skeletal muscle tissue breaks down, and the cells enter the bloodstream, leading to potential kidney issues or kidney failure. People who are extremely sensitive to pain or weakness, who feel unusually tired, and who have dark-colored urine should contact their physician when taking the drug. Other neurological issues may also occur, such as shakiness, tremors, and even seizures; however, these are extremely rare. Allergic reactions or interactions with other medications can also occur. Individuals should discuss all of their medications, other health conditions, and psychiatric conditions with their physician prior to using the drug.

The drug may produce a mild level of physical dependence in individuals who take it for long periods of time, and discontinuation of the drug may lead to issues with anxiety, irritability, and mild flulike symptoms.

The development of physical dependence on a drug as a result of medicinal use under the supervision of a physician is not considered to be a form of substance abuse or addiction by clinical standards. However, prescription medications should only be discontinued under the advice and/or supervision of a physician. Individuals who experience potential withdrawal symptoms would most likely be maintained on a tapering schedule that would allow them to slowly be weaned off the drug, even though the withdrawal syndrome is most likely not dangerous. There is a potential to overdose on the drug, and overdose can lead to significant cardiac issues that require medical treatment.

Losartan is an antihypertensive drug that has little potential for abuse, but does have a potential to be misused individuals who mix it with other drugs or who take too much of it. The drug does not produce significant euphoria or other psychoactive effects, and it does not enhance the effects of other potential drugs of abuse; therefore, it is not listed as a controlled substance, and data regarding its abuse is not maintained by organizations such as SAMHSA. Any individual using the drug and experiencing untoward side effects should discuss the situation with their physician before discontinuing its use.

Ready to get started?
We're available 24/7 to answer questions and help you make decisions about starting recovery.
Are you covered for addiction treatment? Find your insurance.
and many more...
✕
Instantly Check Your Insurance Coverage
Your information is safe & secure
At Laguna, we accept most types of private (non-government) insurance and offer a variety of payment options.
You can quickly and privately check your insurance benefits to see if you're covered for addiction treatment services. We’ll be able to tell you if your provider is in network with Laguna Treatment Center and all American Addiction Centers locations.
This means your treatment may be FREE1 depending on your policy, copay, and deductible.
What's stopping you?You're not defined by addiction. Let's help you get back in control of your life.