How Does Smoking Marijuana Affect Your Weight?

Marijuana use has long been associated with incessant snacking. Smoking marijuana is known to increase one’s appetite – a sensation known colloquially as “the munchies.” Because of this common side effect, people commonly assume that chronic marijuana use causes weight gain.

Several researchers have tested this hypothesis in recent years with interesting results. While most studies agree that marijuana use affects your weight, the general effects vary from lab to lab.

Has your marijuana use become unmanageable? Take our addiction assessment now. It’s free and 100% confidential. 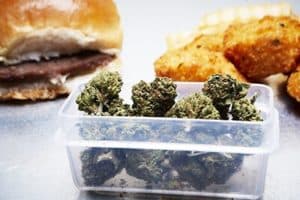 A 2014 study in the journal Innovations in Clinical Neuroscience examined the effects marijuana had on weight. Their research revealed that individuals who regularly use larger quantities of marijuana (e.g., smoking two or three marijuana cigarettes, or joints) did take in more calories than individuals who smoked less or not at all.

However, this study also uncovered something paradoxical: People who smoked marijuana overall had a lower body mass index (BMI) than nonsmokers. The study was ultimately inconclusive, requiring more research, but these findings hinted that marijuana may affect your weight in a positive way.

These findings reaffirmed a 2011 TIME magazine report, in which scientists surveyed 52,000 people and found that 25 percent of nonsmokers were obese compared with 17 percent of marijuana users. The pervading theory from both these studies was that marijuana activates the brain’s pleasure center in the same way that food does. By smoking regularly, a person may sate the urge to overeat later.

Although the results of these studies may look promising to people who enjoy marijuana, it is still important to recognize the way marijuana can affect your health. Smoking pot may be healthier than overeating or using illicit substances, but that does not mean it is perfectly healthy.

A study in Preventative Cardiology discovered that marijuana use has been associated with an increase in:

The study also mentioned that marijuana use often accompanied other unhealthy behaviors like drinking alcohol and using tobacco or illicit drugs – all of which have a negative effect on health.

Studies indicate that marijuana does not trigger an increased appetite in test subjects until after two or three joints. Simply limiting the amount you smoke can help you maintain a healthy weight. Individuals who regularly smoke marijuana should also consider a regular exercise and diet regimen. This will help prevent compounding cardiovascular effects because of marijuana use and poor diet.

effectsherbalmarijuana
Prefer getting help via text?
We're available 24/7 via text message. Signup below for access to our team when its convenient for you!
and many more...
What's next for you?Recovery is possible. We're here to help with your addiction.