What Is Meloxicam (Mobic) and How Is It Abused?

Meloxicam is the generic name for a prescription nonsteroidal anti-inflammatory drug (NSAID). It is often prescribed under the medication brand name Mobic. It is sometimes used as an alternative prescription to treat moderate to severe pain in place of opioid painkillers, which have a high risk of dependency, abuse, and addiction.

This is a popular medication in the treatment of osteoarthritis, rheumatoid arthritis, and other chronic conditions that cause pain due to swelling in the joints. The Food and Drug Administration (FDA) approved meloxicam for prescription use in the US in 2000.

How Does Meloxicam Work? 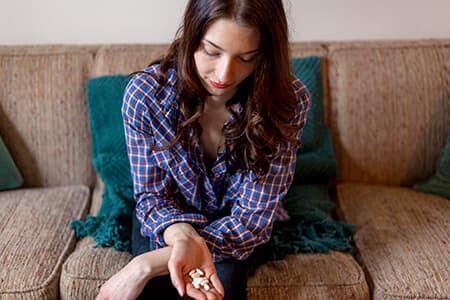 NSAIDs in general work by reducing the body’s inflammation response, which is part of what causes pain from injury or illness. NSAIDs also can be used to reduce fevers, and low doses of aspirin in particular are sometimes use to reduce the risk of heart attack. However, regular aspirin therapy should not be started without first consulting with a health care professional.

Meloxicam inhibits the enzymes that create prostaglandins, which are groups of lipids involved in the body’s response to perceived injury, leading to inflammation and blood clotting around the wound site.

Meloxicam comes in capsule, tablet, and liquid suspensions. The average dose for adults begins around 5-7.5 mg once per day, and it can be adjusted as needed.

Meloxicam is related to other NSAIDs like ibuprofen. Both drugs can treat mild to moderate pain, fever and inflammation. Motrin and Advil are other drugs of this nature. 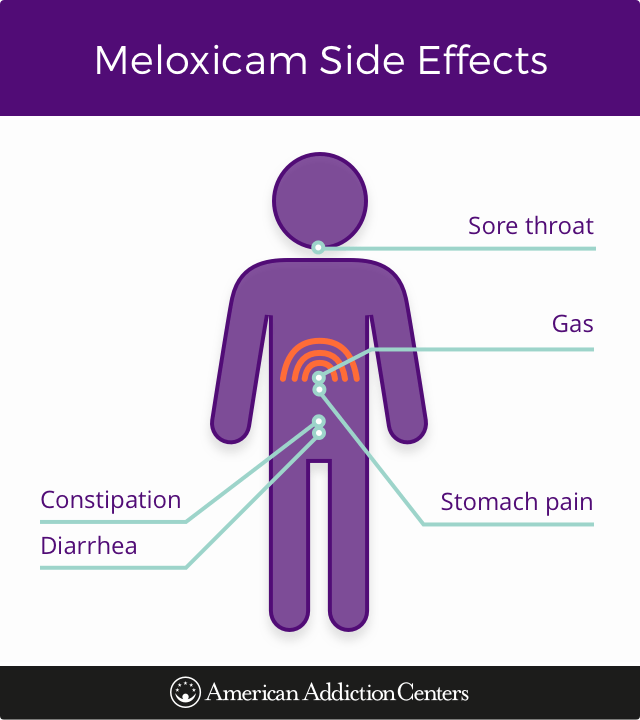 Some side effects can be serious and require immediate treatment from a health care professional. Heartburn, stomach pain, bloody vomit, vomit with a coffee-ground appearance, black tarry stools, or bloody stools can be signs of ulcers or bleeding in the stomach or intestines. Allergic reactions can also be dangerous, and may include signs such as trouble breathing, itchy or painful rash, sneezing, runny nose, or swelling.

A person’s likelihood of stroke, blood clots, or heart attack might be raised by taking meloxicam, especially for those who for a long span of time take meloxicam. Additionally, meloxicam may cause liver or kidney damage.

It is also possible to overdose on meloxicam or Mobic. Symptoms of an overdose include:

If a person may have overdosed on meloxicam, seek emergency medical attention.

Although meloxicam has some potentially dangerous side effects, like other NSAIDs, it is not able to cause euphoria, or a high, that could potentially lead to addiction or substance abuse.

However, some people do reportedly abuse meloxicam because it is a prescription painkiller, which some people assume means that it contains an opioid. Individuals who struggle with an opioid use disorder may take meloxicam if they believe it is a opioid painkiller. The U.S. Department of Justice notes, in a 2011 report on drug trafficking in New England, that meloxicam had been seized by law enforcement officials in the area.

Additionally, meloxicam may be used in a pattern of polydrug abuse. For example, people who suffer hangovers from binge drinking alcohol frequently may take large doses of meloxicam to relieve their hangover symptoms quickly. This may then enable them to binge drink more frequently, since there may be fewer immediate consequences. The combination of alcohol and NSAIDs is very dangerous, as it can lead to dangerous ulcers or bleeding in the stomach or intestines.

For people who take NSAIDs, smoking raises the likelihood of gastrointestinal bleeding.

However, tobacco use is common among people who abuse other substances. In fact, adults with substance use disorders or mental illness smoke cigarettes more than those with none of these disorders.

Get Help for Polydrug or Prescription Drug Abuse

Many people with substance use disorders struggle with multiple substances over the course of their lives. Meloxicam is a prescription painkiller, and although it is an NSAID and cannot cause a high, some people may misuse or abuse the substance anyway due to a misunderstanding of what it is or in an effort to alleviate pain. In large doses, meloxicam can be very dangerous, especially to the gastrointestinal system. It is important to get help from a rehabilitation program as soon as possible to overcome addiction and substance abuse, especially polydrug abuse or issues with co-occurring disorders.

If you are a loved one are struggling with substance abuse there are many treatment centers in Orange County available to help you begin your road to recovery.

other substances
Prefer getting help via text?
We're available 24/7 via text message. Signup below for access to our team when its convenient for you!
and many more...
✕
Instantly Check Your Insurance Coverage
Your information is safe & secure
At Laguna, we accept most types of private (non-government) insurance and offer a variety of payment options.
You can quickly and privately check your insurance benefits to see if you're covered for addiction treatment services. We’ll be able to tell you if your provider is in network with Laguna Treatment Center and all American Addiction Centers locations.
This means your treatment may be FREE1 depending on your policy, copay, and deductible.
What's stopping you?You're not defined by addiction. Let's help you get back in control of your life.