Social media’s influence on human connections remains uncertain: Do platforms like Facebook and Instagram truly “bring the world closer together,” or do they simply increase our isolation? For communities once marginalized by prejudice, digital connections can represent a valuable source of support. Moreover, social media grants opportunities for expression, whether on a viral scale or on a very personal level.

These possibilities pose an interesting question to the millions of Americans in recovery from dependence on drugs and alcohol. As the opioid crisis thrusts addiction issues into the national consciousness, could people in recovery use social media to fight the stigma that still surrounds substance abuse? Additionally, could their online presence offer hope to those who desperately seek sobriety?

We set out to explore these questions, studying nearly 135,000 posts relating to sobriety and recovery. Our results reveal a thriving community of people in recovery connecting across the country. From sober celebrity icons to common post sentiments, these findings present the trends that define Instagram’s recovery community. Keep reading to find out what staying sober looks like on social media. 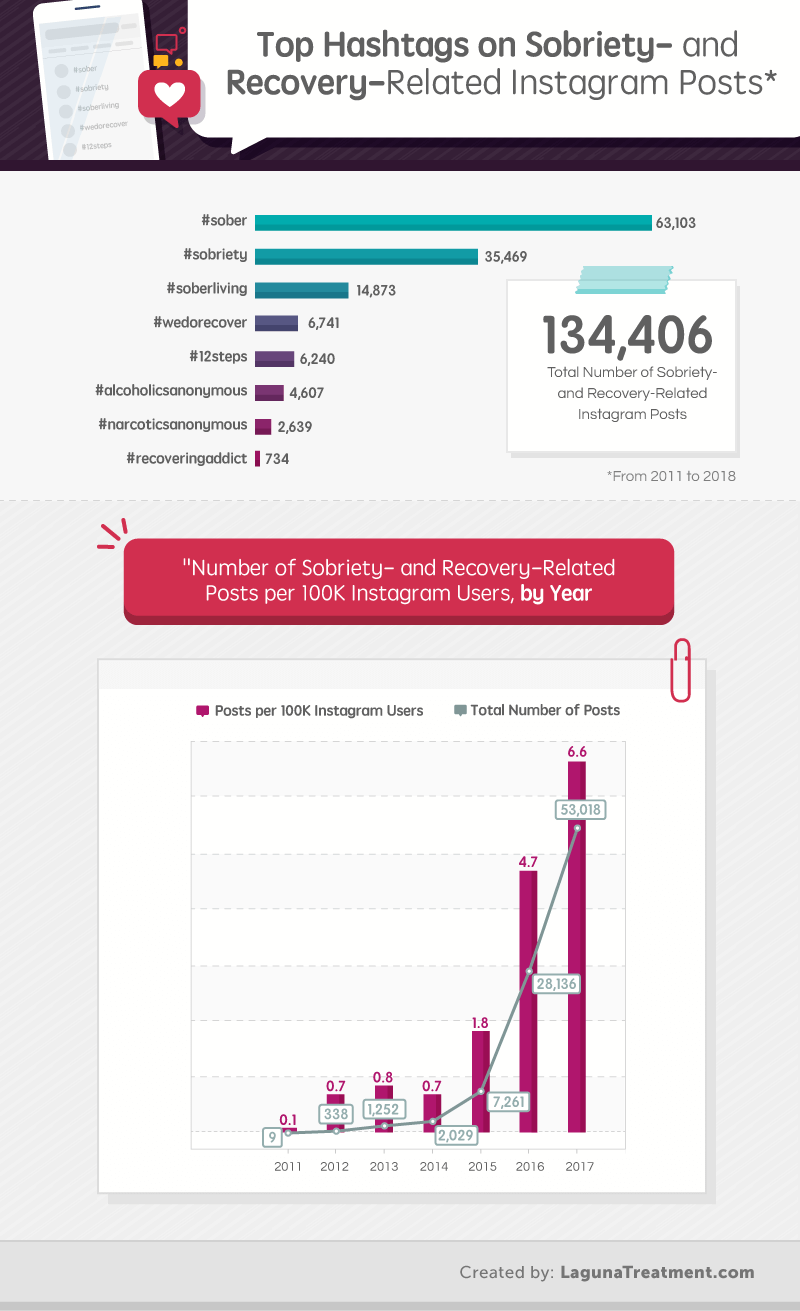 Our analysis reveals a multitude of hashtags regarding recovery or sobriety. While most are self-evident, others require more explanation to the reader unfamiliar with recovery fellowships and phrases. The most common hashtags #sober and #sobriety deliver a clear and powerful declaration of a new lifestyle – one that followers will likely understand even if they’re not well-versed in recovery culture. #Soberliving could convey a similar message but might also have a more specific connotation in some cases: The term refers to a particular kind of recovery-oriented residence with structured rules and abstinence requirements. Meanwhile, #wedorecover echoes a phrase found throughout the official literature of the 12-step groupNarcotics Anonymous.

Differences in jargon aside, Instagram posts about sobriety and recovery have spiked in recent years. Between 2015 and 2017, related hashtags enjoyed a particular surge in popularity; even as Instagram’s user base expanded during that period, the number of posts per 100,000 users soared. The timing of this trend coincides with an explosion of public concern about opioid abuse. In 2016, opioid overdose deaths hit a record high, and the federal government declared a public health emergency in 2017. Against this backdrop of a national crisis, the community of recovering persons likely swelled – and found a new reason to declare a presence on social media. 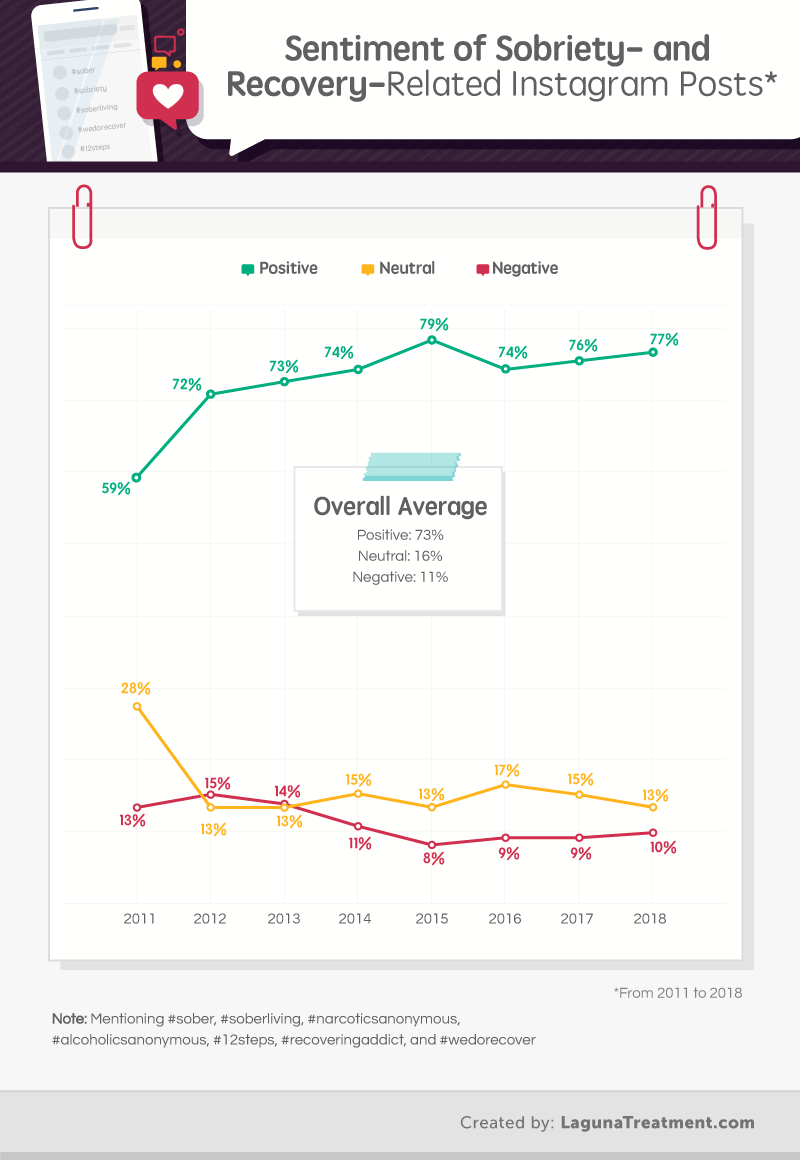 Sobriety can entail both tremendous joy and deep distress. As people in recovery engage in the challenging work of rebuilding their lives, they naturally experience a range of emotions. When we conducted a sentiment analysis of the language of recovery-related posts, however, we found the vast majority were positive. Moreover, the percentage of posts reflecting positive sentiment trended upward during the period studied. Evidence of recovery positivity is encouraging because stress cues that prompt negative emotions can increase the relapse risk.

Of course, it’s worth noting that social media sentiment typically skews positive. When choosing which parts of our lives to share with our followers, we’re more likely to share the glowing highlights than the difficult down times. Hopefully, the happy tone of most sobriety posts doesn’t discourage those whose recovery journey still includes big challenges, but rather encourages them to keep moving forward. 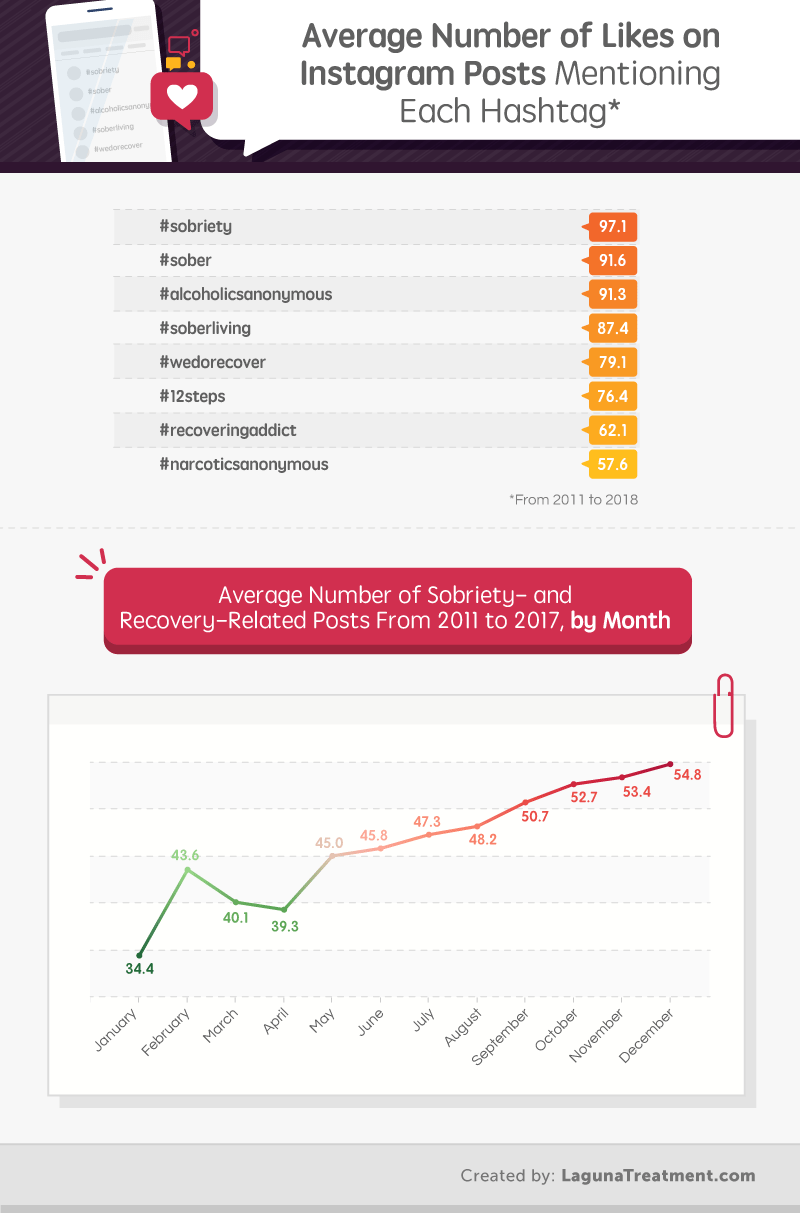 According to our findings, Instagram posts using sobriety or recovery hashtags typically garnered several dozen likes. Posts that utilized #sober or #sobriety gained a particularly high number of likes on average, as did #alcoholicsanonymous. Posts relating to AA raise an interesting debate, as the fellowship has maintained a position that its members should not identify themselves as such on social media. Still, many use social networks to celebrate recovery milestones in anonymous 12-step fellowships, especially by posting pictures of medallions awarded for sobriety “anniversaries.”

Our data also reveal an interesting trend in the timing of recovery-related posts: From May through the end of the year, the average number of posts climbs steadily. At the beginning of a new year, however, the number of sobriety- and recovery-related posts drops precipitously. After increasing in February, posts drop once again in March and April. One explanation for this drop in recovery enthusiasm could be the cumulative effects of winter. Months of cold and darkness represent real depression risks, and that mood can make gratitude for one’s recovery difficult to summon.

If social media activity relating to recovery is fairly common nationwide, where is it most concentrated? New Hampshire had the greatest number of posts per capita and also led all other states in posts containing two specific hashtags: #narcoticsanonymous and #recoveringaddict. This activity likely reflects New Hampshire’s ongoing efforts to combat the opioid crisis – in a relatively small state with such profound devastation, urgent need can erase a sense of stigma. Similar factors may explain the prevalence of recovery posts in the neighboring state of Maine, which ranked third in recovery posts per capita.

Utah was another hot spot for recovery content on Instagram. The Beehive State ranked second overall in posts per capita and had the most #alcoholicsanonymous posts as well. Utah has a distinctive history with mind-altering substances: Many of its residents are Mormon and avoid alcohol and drugs accordingly. Despite this strong element of the state’s culture, however, much of rural Utah has been devastated by overdose deaths in recent years. In sparsely populated areas where resources are scarce, there’s strong incentive to grow a digital recovery community. 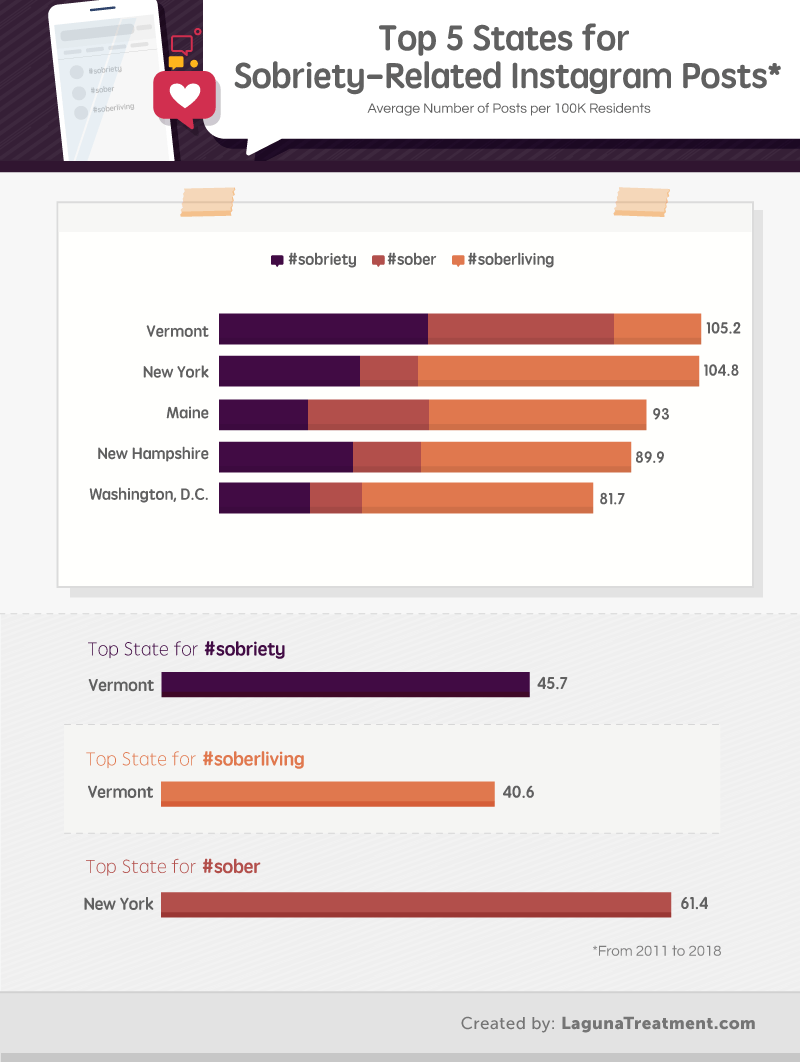 In addition to geographic data concerning recovery terms, which states use sobriety-specific hashtags most frequently? Relative to its population, Vermont had the most robust Instagram activity of this variety, as well as the greatest number of posts using #sobriety and #soberliving. Like many of its New England neighbors, Vermont has seen a tragic number of opioid-related deaths in recent years. But the state has also gained praise for its aggressive investment in recovery resources for residents, nearly doubling the number of people in treatment.

Recovery Capitals Around the Country 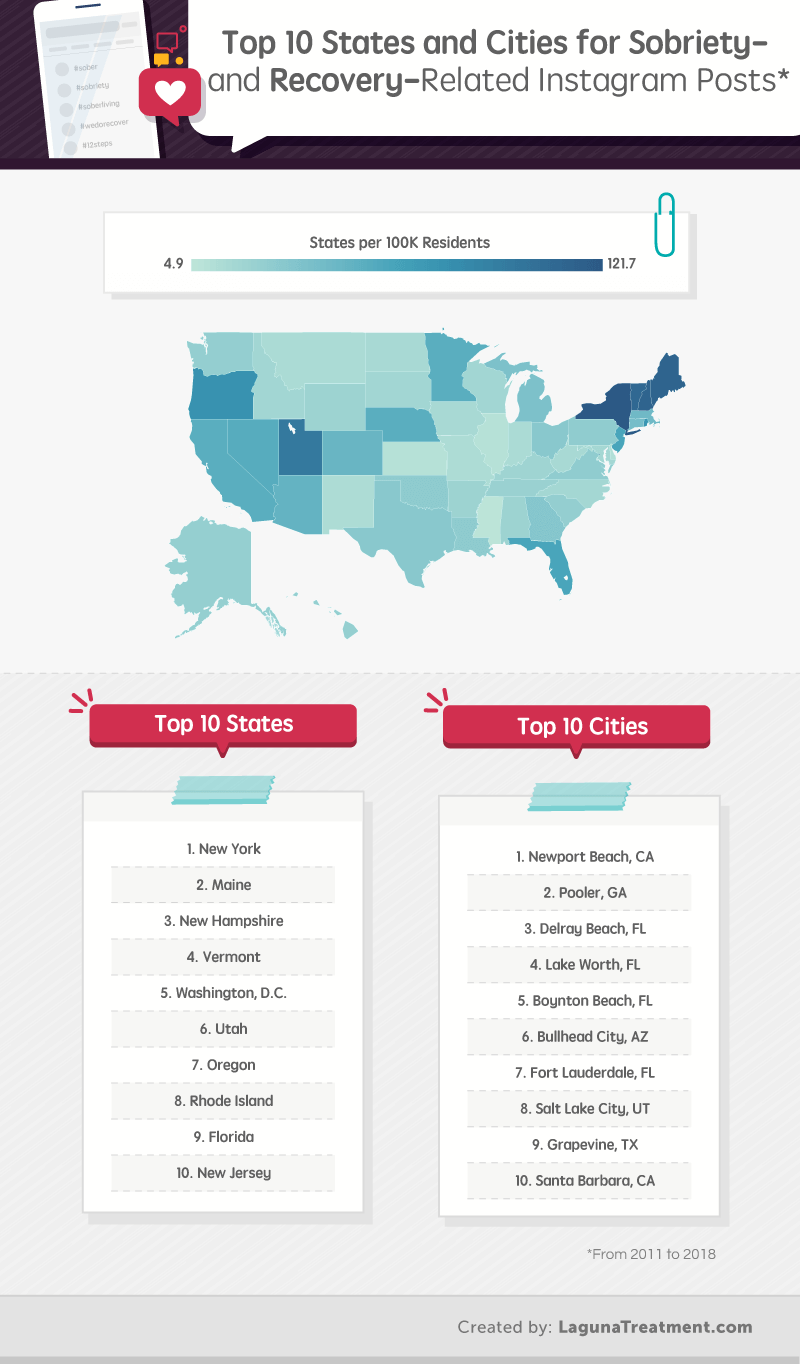 When we consider the distribution of posts at the city level, we found a distinctive pattern: Social media activity containing recovery and sobriety hashtags was concentrated in cities with large treatment industries. Nowhere is this more apparent than in South Florida, where no fewer than four of the top 10 cities lie just miles apart from each other. The region’s reputation as a recovery capital has recently been subjected to extensive scrutiny, following allegations of widespread fraud and unethical treatment. But if our data are any indication, many individuals are nonetheless proudly pursuing recovery in these South Florida cities.

Other so-called “recovery capitals” had extensive sobriety-related social media activity, including top-ranked Newport Beach, where sober living facilities are quite common. But the appearance of other cities was more surprising, including Pooler, Georgia, and Bullhead City, Arizona. These findings demonstrate that active recovery communities exist outside of America’s major metropolitan areas – and social media could be an essential part of those local sober cultures. 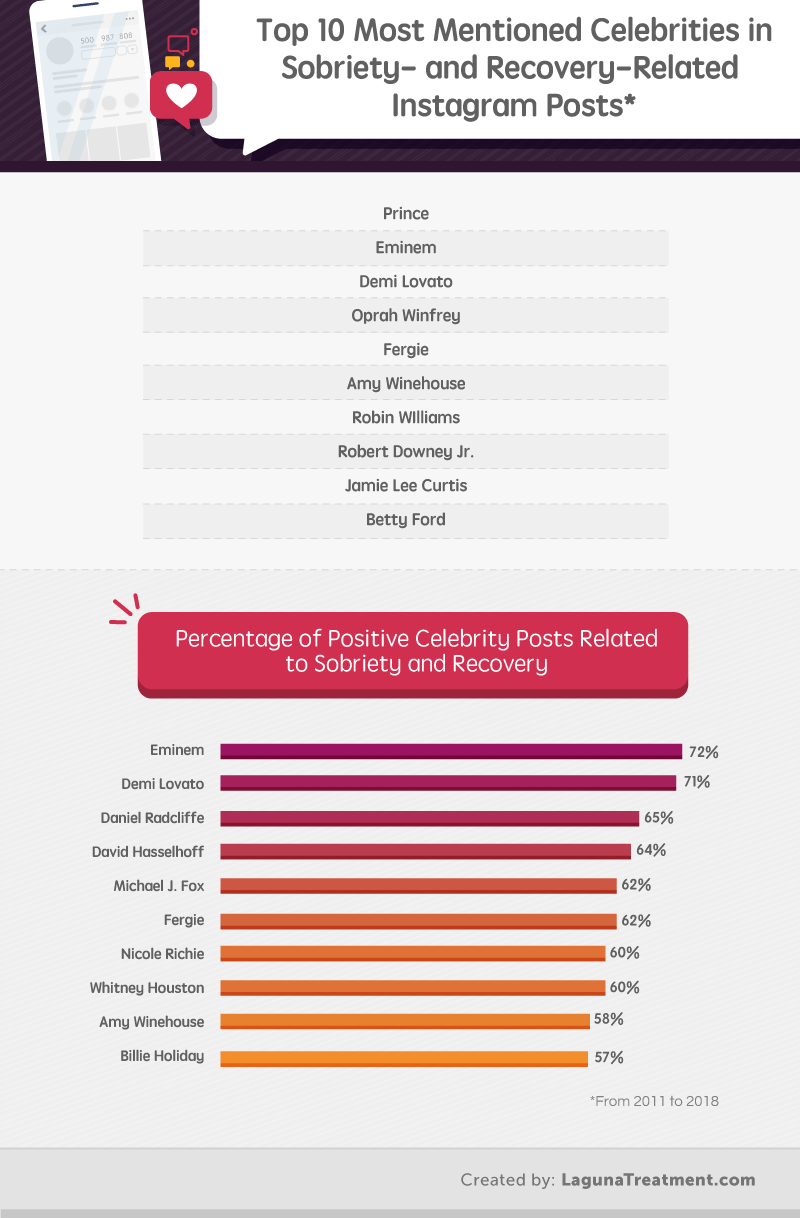 Average citizens can inspire others with their sobriety, but stories of celebrities’ drug use and recovery seem to galvanize massive social media discussion. No icon prompted more conversations about recovery than Prince, whose accidental overdose death sparked thousands of posts employing sobriety-centric terms. Happier outcomes also generated user engagement: Eminem, sober for more than a decade, was mentioned in the second-highest number of posts. In recent years, the rapper has integrated dark memories of past use into his lyrics, but posts mentioning him were overwhelmingly positive.

Demi Lovato ranked third in mentions in sobriety-related posts, of which more than 70 percent contained positive sentiments. Many attribute her fans’ rabid support to Lovato’s transparency: She has been honest about her experiences of both recovery and relapse. Her recent hospitalization following an overdose has also generated widespread support from fellow celebrities on social media; greater visibility for addiction issues may be the only silver lining of her struggles.

Creating Your Own Community

The results of our analysis reveal a vast and growing number of Americans taking to Instagram to share their journeys in recovery. And while they may use different terms or hail from opposite ends of the country, their posts are all a part of a seismic shift in the way the nation views those who struggle with substance abuse. In decades past, addiction has been shrouded in shame – a pattern of stigmatization with deadly consequences. But as people in recovery use social media to make their challenges and triumphs known, the need for effective treatment becomes impossible to ignore. Sobriety no longer requires secrecy, and transparency can inspire hope in those who are still struggling.

For those who would like to leave substances behind and join the recovery community, the path can still be uncertain, however. With so many treatment resources available, choosing the right facility for yourself or a loved one can feel overwhelming. At Laguna Treatment Hospital, our approach is distinguished by a commitment to clear values: patient safety and comfort. By offering unmatched technology and expertise, our team ensures the best possible beginning to the lifelong journey of recovery. Learn more about what sets our program apart today.

We scraped 134,406 Instagram posts covering the following hashtags: #sober, #sobriety, #soberliving, #wedorecover, #12steps, #alcoholicsanonymous, #narcoticsanonymous, and #recoveringaddict. We used Python to collect data for the hashtags from 2011 to June 2018. We recognize that there are other hashtags that Instagram users use that are related to Sobriety and Recovery on Instagram. The hashtags that were used are the same hashtags that were used in a previous study. However #soberlife was excluded from this research study due to complications with the data collection.

Using TextBlob, a Python library that performs common natural language processing, we determined the sentiment of the text. Sentiment is an analysis of how positive, neutral, or negative something is. It is based on a score of -1 to 1, with -1 being extremely negative, 0 being neutral, and 1 being extremely positive. Because this is based on a pre-existing text analysis library, we could not customize the dictionary used to analyze this text; therefore, words that may be positive in the context of this topic may not be recognized as positive in this analysis.

Just as those in recovery use social media to share their stories, you can help us spread the word that sobriety is possible. That’s why you’re welcome to use this content on your own site or social media for noncommercial purposes. We just ask that you include a link back to this page so that others can explore the full project.

research
Prefer getting help via text?
We're available 24/7 via text message. Signup below for access to our team when its convenient for you!
and many more...
✕
Instantly Check Your Insurance Coverage
Your information is safe & secure
At Laguna, we accept most types of private (non-government) insurance and offer a variety of payment options.
You can quickly and privately check your insurance benefits to see if you're covered for addiction treatment services. We’ll be able to tell you if your provider is in network with Laguna Treatment Center and all American Addiction Centers locations.
This means your treatment may be FREE1 depending on your policy, copay, and deductible.
Get the Info & Help You NeedWe're open across the US. Learn about your options.