How Long Do the Effects of Cocaine Last?

Cocaine is a stimulant drug that can produce euphoric feelings when taken; however, its effects are relatively brief.

Read on for more information about the effects of cocaine, the associated withdrawal timeline, and how to get help for a cocaine addiction.

How Long Do the Effects of Cocaine Last? 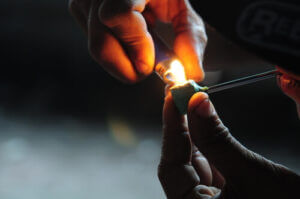 The way that cocaine is used impacts when the effects of the cocaine start:

For the most part, after a person takes cocaine, its effects do not last very long. Like onset of action, the duration of action depends on the mode of cocaine use:

Side Effects of Cocaine Use

Short-term effects of cocaine use may include:

How Long Does Cocaine Stay in Your System?

The length of time cocaine stays in a person’s system varies. But generally, cocaine is detectable for a few days to weeks.

Several different factors influence the amount of time that cocaine remains in an individual’s system.

How to Test for Cocaine Use

The liver is responsible for metabolizing cocaine. It breaks down the drug into smaller compounds called metabolites.

A major metabolite for cocaine is called benzoylecgonine, which is often measured during urine analysis to determine if someone has used cocaine recently. Benzoylecgonine can be detected in urine for a longer period of time than cocaine itself.

There are several different methods to test if cocaine is present in a person’s system.

What to Expect During Cocaine Withdrawal

Regular use of cocaine can lead to tolerance and dependence:

When a person takes cocaine, dopamine levels are increased in the brain’s movement and reward circuits. A build up of dopamine in the synapses (the space between nerve cells) occurs due to cocaine preventing dopamine from being recycled back into the cells that release it. This excess dopamine contributes to the feelings of euphoria that cocaine produces.

The reward circuit becomes used to larger amounts of dopamine, so if the person stops using cocaine, they experience withdrawal, sometimes referred to as a “crash.”

It is common for individuals who use cocaine to do so in binges, where they use the drug multiple times in short periods to sustain their high. Once a person becomes dependent on cocaine, they are even more compelled to use the drug repeatedly because it helps them avoid withdrawal symptoms.

Cocaine withdrawal symptoms can include:

Interestingly, withdrawal from cocaine often does not produce many observable physical symptoms. It is typically not as dangerous as the withdrawal process for drugs like alcohol or benzodiazepines.

Some researchers conceptualize cocaine withdrawal as occurring in 3 phases:

However, several later studies indicated that there are not distinct phases, but instead a gradual decrease in withdrawal symptoms.

Cocaine withdrawal can cause depression, which can persist for months in previously heavy users. Individuals experiencing depression are at risk of self-injury and suicide. The cravings and other unpleasant symptoms an individual experiences during withdrawal may prompt them to relapse, and this puts them at risk of overdosing.

Do I Need Medical Detox to Quit Cocaine?

Even though going through withdrawal from cocaine is typically not associated with severe physical symptoms, there are several reasons for an individual to choose a medical detox center as opposed to trying to quit the drug on their own. These reasons include:

To learn more about how we can help you address your cocaine use and other issues you may be struggling with, call us at . Our admissions navigators can answer any questions about the rehab admissions process and how to pay for rehab or using insurance to pay for rehab.

You can also find out whether we accept your health insurance by filling out this simple and secure .

Don’t wait to build a better future. Take the first step toward recovery and contact us today.

cocaineeffectstimeline
Prefer getting help via text?
We're available 24/7 via text message. Signup below for access to our team when its convenient for you!
and many more...
What's next for you?Recovery is possible. We're here to help with your addiction.