Hallucinogens represent a class of drugs with psychoactive effects that produce significant changes in a person’s thinking processes (cognition) and a significant alteration of perceptual experiences. Perceptions refer to the subjective interpretation of environmental stimulation. Stimulation occurs as a result of energy being transmitted to the sensory areas in the brain via a number of sensory organs in the body, and perception refers to the subjective interpretation of analyzing this sensory stimulation. 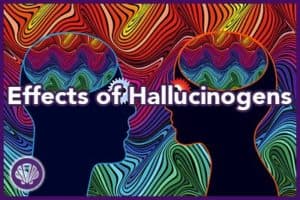 Many hallucinogenic drugs produce synesthesias, the perception that one’s senses are mixed. Often, individuals under the influence of these drugs may believe that they can see sounds, hear colors, etc. In addition, hallucinogenic drugs often produce significant distortions of one’s perception of time, space, and other aspects of reality, such as perception of the self or the nature of the world. These distortions are sometimes referred to as dissociative effects. Many advocates of the use of hallucinogenic drugs claim that these drugs expand one’s consciousness, and certain hallucinogenic drugs are used by specific religious sects for this experience. In some instances, the use of these substances by certain groups of individuals, such as Native Americans, is legal whereas the possession of these substances is not legal for others (e.g., the legal use of peyote for some groups).

Outside of specific groups being allowed to legally use certain substances in religious ceremonies, the classification of these substances by the United States Drug Enforcement Administration (DEA) indicates that the federal government assumes that most hallucinogens do not have any medicinal utility and are drugs that have a high risk to be abused and to result in psychological or physical dependence; the DEA generally classifies hallucinogens as Schedule I controlled substances. In spite of this classification, several hallucinogens have empirical evidence that they may indeed have medicinal uses (e.g., the use of LSD in the treatment of anxiety and other psychological issues).

According to the latest data collected by the Substance Abuse and Mental Health Services Administration (SAMHSA), an estimated 1.2 million individuals over the age of 12 years old reported using hallucinogenic drugs in 2015. SAMHSA combines all hallucinogens into one singular category. The breakdown of hallucinogen use in the United States by age group follows:

More On Hallucinogens and Abuse

Drugs in the subcategory of classic hallucinogens are more likely to produce enhanced sensory abilities, alterations in one’s sense of the passage of time (most often, as time passing significantly more slowly), alterations in the perception of space (objects appearing larger or smaller), and the experience of hallucinations (most often, visual and auditory hallucinations). This class of hallucinogenic drugs does not typically produce significant dissociative effects, although in some individuals, these experiences may occur. There are several different classic hallucinogenic drugs that are familiar to most people.

Lysergic acid diethylamide (LSD) is perhaps the most well-known hallucinogenic drug. It is a synthetic drug that was developed in the 1930s in an effort to find medicines that could assist in childbirth. LSD had no utility for this effect, and its hallucinogenic effects were discovered by accident when the researcher who developed it decided to investigate any other potential uses it may have several years after its original formulation. The researcher accidentally ingested some of the drug and began to experience hallucinations. He later tested the drug on his colleagues and got similar results. LSD was considered to have significant medical uses for the treatment of individuals with psychiatric disorders. The drug became a significant part of the countercultural movement in the 1960s and 1970s, and it was propagated as a mind-expanding substance; however, it eventually lost favor, and the drug was banned and classified as a Schedule I controlled substance by the DEA.

LSD is a very potent substance. Users take very small doses that are typically ingested orally in pill form or as a liquid form that is placed on ingestible paper. The most common doses that individuals use are 100-200 micromilligrams, but the effects of LSD are quite long-lasting and may continue for 10-12 hours even in these small doses. The effects of taking LSD include:

The subjective effects of LSD are often related to the particular situation in which the drug is used. For instance, an individual who is depressed or nervous may experience extreme depression or even panic attacks; an individual who is uncertain about the drug or has certain fears regarding losing control may feel hopeless and out of control; a person who is happy may begin to feel even happier, etc.

Interestingly, the evidence that high doses of LSD can result in fatalities is scant, and the vast majority of fatalities that are associated with LSD use indicate that these individuals also used other dangerous drugs in combination with LSD. Nonetheless, there are some significant risks to LSD that include the potential for engaging in risky or even self-harming behaviors as a result of a loss of reality, having “bad trips” that can be extremely distressing, and the development of a specific substance-related disorder known as hallucinogen persisting perception disorder. This disorder consists of a number of “flashbacks” that are similar to the effects of being on LSD when the individual has not taken the drug. This disorder may also appear in individuals who use other hallucinogenic drugs, but it is more common with LSD use. A very small proportion of individuals develop this disorder, and its treatment is based on the specific symptoms experienced.

The hallucinogenic substance that is contained in a number of different types of mushrooms is psilocybin (4-phosphoryloxy-N, N-dimethyltryptamine). These mushrooms are commonly referred to as “psychedelic mushrooms” or “magic mushrooms,” and they are often grown in areas of Central and South America or in the southern portions of the United States. The mushrooms are most often dried and eaten, but in some cases, they may be ground up and used in beverages. Use of psilocybin typically produces:

Mescaline is a substance that can be naturally found in the cactus peyote that grows in areas of Central America and the United States. Mescaline can also be produced synthetically. Peyote is typically dried and chewed, or used in beverages; in some cases, it can even be dried and smoked). Artificially manufactured mescaline is often taken in the form of pills or as a liquid.

Certain Native American religious sects are still allowed to legally use peyote in their religious services in the US. Despite its classification by the DEA, there is little evidence to indicate that taking high doses of peyote can result in fatalities or other serious issues, although as with any hallucinogenic drug, issues can occur due to poor judgment, depression and suicidality, and accidents while under the influence of the drug.

The effects of taking mescaline are relatively long-lasting and often include:

Several drugs are considered to be dissociative hallucinogenic drugs.

N, N-Dimethyltryptamine (DMT) is a dissociative hallucinogenic substance that is extracted from the leaves and shoots of the tropical vine ayahuasca that grows in Central America and South America. DMT can be used in a powder or pill form. It can also be used as a tea or chewed from the ground leaves of the plant. The effects of DMT include:

Chronic use of PCP has been demonstrated to be associated with irreversible brain damage in a number of research studies that have investigated its effects in laboratory animals and in chronic users of the drug.

Ketamine is a dissociative hallucinogenic drug that was developed to be used as an analgesic drug (for the treatment of pain) and as an anesthetic. The use of the drug was associated with a number of serious side effects, and it is only used as an anesthetic in special cases currently.

In the 1990s and the early part of the 2000s, ketamine was popular with adolescents and young adults who attended parties or clubs, but its use has significantly decreased in recent times. Ketamine is also a drug that has received some attention as potentially being useful in the treatment of clinical depression.

Ketamine has an unusual mechanism of action compared to other hallucinogenic drugs as it exerts a significant antagonistic effect on the excitatory neurotransmitter NMDA (N-methyl-d-aspirate). Using ketamine results in: 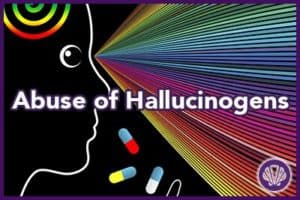 The majority of research regarding use of hallucinogenic drugs indicates that most of the drugs in this class have a relatively low potential for abuse and even for the development of physical dependence. Most of the drugs do result in the development of tolerance in individuals who chronically use them, but the withdrawal syndrome associated with discontinuation is not well documented for the majority of hallucinogenic drugs except for ketamine and PCP. In cases where withdrawal symptoms are reported, they are primarily issues with depression, anxiety, irritability, and other psychological symptoms. They are not considered to be potentially life-threatening in the same way that other withdrawal symptoms are (e.g., the withdrawal syndrome for benzodiazepines and alcohol), except in cases where individuals may become suicidal or be prone to accidents or poor judgment.

Any substance can be a substance of abuse when it is used in a manner that results in an individual experiencing significant distress or functional impairment in life. Hallucinogenic drugs do have specific diagnostic criteria to determine if individuals who use them have developed some form of substance use disorder. Separate criteria for a PCP use disorder and for other hallucinogenic substances are listed by the American Psychiatric Association (APA), indicating that there are specific issues related to PCP use that are not believed to relate to the use of other hallucinogenic drugs.

In terms of a clinical diagnosis, a substance use disorder may be present when a person:

Anyone who uses any hallucinogenic substance and experiences issues associated with use should suspect that they may have an abuse issue and should seek formal medical detox program for drug misuse and tailored treatments.

Hallucinogens
Prefer getting help via text?
We're available 24/7 via text message. Signup below for access to our team when its convenient for you!
and many more...
✕
Instantly Check Your Insurance Coverage
Your information is safe & secure
At Laguna, we accept most types of private (non-government) insurance and offer a variety of payment options.
You can quickly and privately check your insurance benefits to see if you're covered for addiction treatment services. We’ll be able to tell you if your provider is in network with Laguna Treatment Center and all American Addiction Centers locations.
This means your treatment may be FREE1 depending on your policy, copay, and deductible.
What's next for you?Recovery is possible. We're here to help with your addiction.