Risks of Mushroom Abuse and Its Effects on the Body

All psychoactive drugs alter thinking processes and result in an alteration of the perception of environmental stimuli; however, the majority of these drugs simply amplify or dampen these processes.

Hallucinogens alter experience in a manner that is no longer familiar, and this results in very different patterns of perception and thinking than those that occur in reality, such as visual hallucinations, auditory hallucinations, altered senses of time and self, and even the development of delusions.

The term magic mushrooms actually refers to well over 100 species of mushrooms that contain the psychoactive drug psilocybin (4-phosphoryloxy-N, N-dimethyltryptamine). Many of these contain other psychoactive substances, although psilocybin is typically deemed to be the major psychoactive substance in the mushroom. Psilocybin is considered to be a Schedule I controlled substance by the United States Drug Enforcement Administration (DEA), which classifies it as having no medicinal uses and a high potential for the development of abuse and physical or psychological dependence. 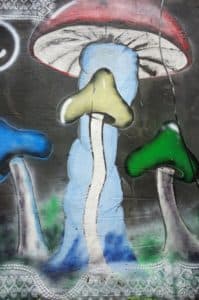 In addition, a number of research studies have indicated that the use of psilocybin results in several interesting changes in normal functioning that include:

All of these findings from the research can be interpreted as positive or potentially negative depending on the outcome. For example, being open to new experiences is also associated with loss of a fear response in many individuals. Depending on the situation, this could be a good or bad thing.

The use of magic mushrooms on a regular basis is associated with very rapid development of tolerance to psilocybin. Tolerance occurs when individuals need more of a specific substance to get the effects that once occurred at lower doses. However, there is no evidence that individuals who regularly use magic mushrooms can develop physical dependence on them.

Physical dependence occurs when individuals develop both tolerance and withdrawal symptoms to a drug. Withdrawal occurs after the development of tolerance and consists of a series of negative physical and emotional effects from discontinuing a drug or significantly cutting down its dose. Despite the classification of psilocybin by the DEA, there is very little evidence to suggest that psilocybin is a major drug of abuse, and there are no recorded fatalities of overdosing on psilocybin alone. Fatalities associated with psilocybin often include use of other dangerous drugs, such as alcohol.

Even though psilocybin is not considered to be a drug that has a high potential for abuse, it can be abused. Individuals demonstrating psilocybin abuse (a hallucinogen use disorder) will engage in a number of dysfunctional activities associated with use of the drug. These include issues like spending significant amounts of time using the drug or trying to find the drug, using the drug to cope with everyday stressors, using the drug in situations where it is physically dangerous to do so, using the drug repeatedly despite experiencing negative ramifications of use (problems at work, problems in relationships, failing to maintain important commitments, continued use in spite of psychological or physical damage, etc.), along with the development of significant tolerance.

The development of a hallucinogen use disorder represents the development of a severe mental health disorder that requires an individual to undergo intense and targeted treatment. Those suffering from mushroom abuse will not experience the severe physical withdrawal effects that some drugs produce; however, there are number of negative emotional and psychological effects that these individuals may experience as they attempt to recover from their substance use disorder.

Because individuals who develop abusive patterns of behavior as a result of using hallucinogens often have very complicated psychological issues, treatment can be multilayered.

There are several other negative ramifications of chronic psilocybin use that include:

Hallucinogens
Prefer getting help via text?
We're available 24/7 via text message. Signup below for access to our team when its convenient for you!
and many more...
What's next for you?Recovery is possible. We're here to help with your addiction.