What Is Robotripping? What Are Its Effects on the Body?

In 1958, dextromethorphan was approved by the FDA as an over-the-counter cough suppressant under the brand name Romilar. Romilar was removed from the market in 1973 due to concerns about misuse, but other cough syrups that had dextromethorphan in them were still available because it was thought that they were less likely to be abused.

Dextromethorphan is a synthetic drug that is a D-isomer of levomethorphan, an opioid analgesic. It is thought that dextromethorphan may work in the medullary cough center by triggering sigma opioid receptors. Although related to other opioids, dextromethorphan does not produce analgesia and has little sedative effect.

Dextromethorphan’s main metabolite functions as an antagonist for the N-methyl-D-aspartate (NDMA) receptor, so, in high doses, DXM’s effects are similar to drugs like ketamine and phencyclidine (PCP). Dextromethorphan is often abused for its euphoric and hallucinogenic effects. There are a number of street names associated with dextromethorphan, including dex, skittles, robo, triple C, and poor man’s PCP. Misuse of DXM is sometimes referred to as “robo-tripping” or “skittling”.

Has your dextromethorphan use become unmanageable? Take our addiction assessment now. It’s free and 100% confidential.

Effects of Recommended Use Compared to Excessive Use 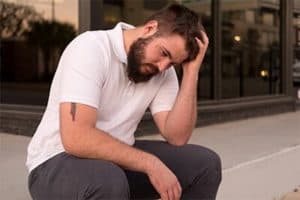 Dextromethorphan’s medicinal effects typically begin after 15 and 30 minutes, reach their maximum around 2 to 3 hours, and end at or before 6 hours. Like any medication, there are potential side effects, including constipation, drowsiness, nausea, vomiting, dizziness, sedation, nervousness, and confusion.

According to the United States Drug Enforcement Administration (DEA), there are four levels of “plateaus”, based on dose, reported by individuals who abuse dextromethorphan.

The DEA reports that dextromethorphan abuse spans all ages but is especially concerning in teenagers and young adults. According to one study, among reviewed cases of dextromethorphan abuse reported to the California Poison Control System (CPCS), 74.5% involved 9- to 17-year-olds and the median age was 16 years old.

Signs that suggest that an individual may be suffering from a substance use disorder include:

Signs of dextromethorphan misuse may include:

Individuals who take more than recommended amounts of the drug are at risk of overdosing. Signs that an individual may have overdosed on DXM include the following:

Individuals who take excessive doses of combination products containing dextromethorphan may also overdose on the other medication(s) in the product as well as DXM or even before they would overdose on DXM. If you think that you or someone else may have overdosed on dextromethorphan or another medication, call the poison control helpline at 1-800-222-1222 or call 911. In an emergency, always call 911.

Anyone who may be struggling with a substance use disorder, whether that involves dextromethorphan, other drugs, or both, should be evaluated by a health care professional. Addiction is a chronic disease that, if left unaddressed, can lead to disability or death. Other drugs are often misused along with dextromethorphan, which can make diagnosis and treatment more complex. Research-based treatment for addiction can help individuals learn to manage their illness and avoid relapse.