What Is Methylenedioxypyrovalerone (MDPV), and How Is It Abused?

MDPV is one of the more common names for the research chemical 3,4-methylenedioxypyrovalerone, a synthetic cathinone drug that is chemically similar to 3,4-methylenedioxymethamphetamine (MDMA or ecstasy). MDMA is derived from khat, a South American plant that is sometimes chewed like gum for its stimulant properties. MDPV is a newer chemical, mainly found in bath salts, a dangerous synthetic stimulant drug that has led to several heart attacks, episodes of psychosis, and violent behavior in the United States starting in 2009.

Many of the synthetic cathinones associated with bath salts are chemically similar to amphetamines, especially ecstasy, but MDPV has been found to function more like cocaine when it impacts the brain. Both drugs elevate levels of dopamine in the brain, leading to similar surges in energy, elevated mood, and anxiety, but MDPV is 10 times more potent than cocaine.

How Does MDPV Work? 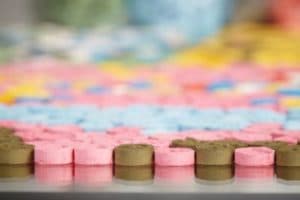 MDPV binds to dopamine, serotonin, and norepinephrine transporters in the brain, preventing these neurotransmitters from being absorbed quickly. Neurotransmitters that stay available to the brain longer change mood and behaviors. In the case of stimulants like MDPV, MDMA, and even meth and cocaine, the person experiences elevated physical energy, increased talkativeness and lowered inhibitions, and excitement and happiness. These positive feelings are then followed by anxiety, paranoia, and possible violence.

This drug is usually found as a white or light brown powder, which may be slightly clumpy and have a specific odor. Sometimes, it is found in pill or tablet form, according to the European Monitoring Centre for Drugs and Drug Addiction (EMCDDA).

The drug hits the brain almost immediately, and effects last between two and four hours. Peak effects occur between 30 and 120 minutes after the substance begins to affect the brain and body.

The National Forensic Laboratory Information System (NFLIS) first reported MDPV in 2009, when there were two reports of this substance involved in hospitalizations or law enforcement encounters. Reports of this drug increased to 380 in 2010 and then to 3,625 in 2011. After several reports of bath salts psychosis, the drug’s popularity decreased a little in 2012, with 3,377 reported incidents of MDPV to the NFLIS.

The drug’s legal status also changed in that time. The Drug Enforcement Administration (DEA) moved MDPV to Schedule I, effectively banning this dangerous stimulant drug and making possession of it legally punishable.

The American Association of Poison Control Centers (AAPCC) reported that, between 2010 and 2012, there were 8,520 calls to poison control lines about exposure to bath salts. In that same period, the DEA reported that 35 out of the 76,857 drug reports involved synthetic cathinones, and 77 percent of those reports involved stimulants containing MDPV.

When MDPV-based bath salts and Molly were legal in the US, most of the people who abused these drugs were young, often adolescents. Teenagers from ages 12 to 18 abused these drugs, as well as young adults. Although some people over the age of 26 have been found to abuse MDPV stimulants, they are a much smaller group than younger people. The Monitoring the Future Survey (MTF) found, in 2017, that 0.5 percent of 8th graders, 0.4 percent of 10th graders, and 0.6 percent of 12th graders abused bath salts, which may contain MDPV, at least once in the prior year.

MDPV was first identified in European markets when Finnish officials in 2008 seized the drug during a customs inspection. Just a year after MDPV first appeared in Europe, the synthetic cathinone made its way to the United States.

Because MDPV is a new drug, it is not known for sure if the substance is addictive. Based on substances that have similar effects, including MDMA, cocaine, and meth, it is likely that MDPV can lead to compulsive behaviors because of how it changes brain chemistry.

Very large doses of MDPV over a long period of time can cause intense paranoia, leading to delusions, aggression, and suicidal ideation. The person may suffer a break from reality leading to psychosis. Heart attack, hyperthermia, kidney failure, seizures, and strokes have been caused by taking a large dose of MDPV, often in the form of bath salts, and these health consequences have led to death.

These basic effects and side effects may last for up to six hours, although the peak effects begin around 30 minutes after taking the drug and decrease after two hours. Negative side effects may last longer, and lead to disturbed sleep, intense mood changes, increased aggression, and physical discomfort from changes to heart rate, breathing, and gastrointestinal function.

As the drug is eliminated from the body, the brain will not be able to produce dopamine at the same rate, and the neurons that are associated with dopamine release will be exhausted. The effect will be intense exhaustion, depression, anhedonia, and low mood after the drug leaves the body due to lower-than-normal levels of neurotransmitters related to mood regulation.

Acute intoxication involving MDPV requires hospitalization because an overdose on this stimulant can be deadly. The first line of therapy after being hospitalized for emergency treatment is to use benzodiazepines to calm the person down; however, in extreme cases such as drug-induced psychosis, the individual may need antipsychotics. Treatments for heart attacks, strokes, hyperthermia, and kidney failure may also be needed.

Someone abusing MDPV, or drugs like Molly or bath salts that may contain MDPV, need help before they suffer an overdose. Treatment approaches in detox and rehabilitation will be like those used for other stimulant drugs, like cocaine, MDMA, amphetamines, or crystal meth.

As with these other stimulants, there are no replacement drugs to ease withdrawal symptoms from MDPV. While some addictive substances like opioids have drugs like buprenorphine or methadone that can be used as medication-assisted therapy (MAT) to ease the body off addiction to the original opioid, MDPV and most other stimulants do not have the same prescription treatment options available.

Instead, during detox, medical professionals will oversee their client’s withdrawal process, monitoring serious symptoms and treating them as necessary. For example, heart damage will require long-term treatment as it could lead to chronic health problems, and this treatment must be initiated alongside substance abuse treatment. Depression or anxiety can be managed with small doses of psychiatric medications. Pain can be managed with over-the-counter painkillers like ibuprofen or aspirin.

Once detox has been completed, it is important to find evidence-based rehabilitation. Whether outpatient or inpatient, rehabilitation offers therapy to change behaviors around drugs and to reduce the risk of relapse back into drug abuse.

The National Institute on Drug Abuse (NIDA) recommends these approaches to therapy to change behaviors around synthetic cathinones like MDPV:

Counselors at the rehabilitation program will also work with their clients on creating an aftercare plan, which should include participation in mutual support groups or individual counseling as necessary.

People overcoming MDPV addiction may develop depression, anxiety, panic disorders, or even psychotic disorders by abusing this drug. In some cases, the person may suffer from mental health problems before abusing MDPV and may self-medicate with this dangerous stimulant; however, MDPV is so potent and damaging to brain chemistry that the substance may also induce serious mental health conditions that may take a long time to go away or could last a lifetime.
Diagnosing these conditions during the intake process and the first few days of treatment is crucial. This will help the person receive appropriate mental healthcare alongside addiction treatment. Managing these conditions together, once the person completes rehabilitation, will be an ongoing process.

Although MDPV is a relatively new substance of abuse, and the effects and addictive potential are not well understood yet, there are many evidence-based addiction treatment programs that understand the harms associated with other stimulants, including amphetamines, ecstasy, crystal meth, and cocaine. Many rehabilitation programs are using the latest science to understand the impact of MDPV drugs, so specific treatments can be geared toward this population.

herbal
Prefer getting help via text?
We're available 24/7 via text message. Signup below for access to our team when its convenient for you!
and many more...
✕
Instantly Check Your Insurance Coverage
Your information is safe & secure
At Laguna, we accept most types of private (non-government) insurance and offer a variety of payment options.
You can quickly and privately check your insurance benefits to see if you're covered for addiction treatment services. We’ll be able to tell you if your provider is in network with Laguna Treatment Center and all American Addiction Centers locations.
This means your treatment may be FREE1 depending on your policy, copay, and deductible.
What's next for you?Recovery is possible. We're here to help with your addiction.