Spice Overdose and Side Effects

Synthetic cannabinoids consist of a number of mind-altering substances that are synthetically produced and marketed as liquids for use with e-cigarettes or added to dried plant material and intended to be smoked in a manner similar to marijuana. Many of these products are marketed as “safe” alternatives to cannabis, and in some cases, they are labeled as “herbal alternatives.”

Common names for these products are Spice, K2, and a number of other local trade names that include black mamba, skunk, etc. Many of these products can be found in gas stations, liquor stores, party stores, headshops, etc. In addition, the products are often advertised as being legal alternatives to cannabis in states where cannabis has not been legalized for recreational use.

The National Institute on Drug Abuse (NIDA) reports that the target market for these substances are younger individuals who would not be able to procure cannabis products legally even in states where they are legal, individuals of lower socioeconomic status who cannot afford cannabis, and even homeless individuals who may purchase the product in order to get a “cheap high.” In addition, those who are looking for a new or experimental high may procure these drugs. 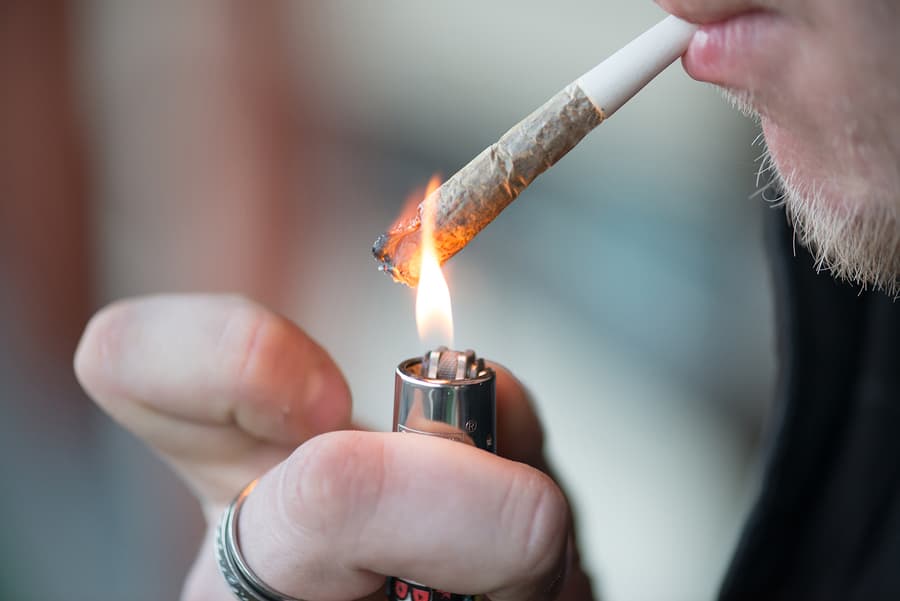 is no regulatory body that controls the manufacture of these substances or their distribution. There is also no consistency in the particular chemicals involved from product to product or in the amounts of the chemicals that are present in different products.

Many of these drugs are actually synthesized in countries like India, Pakistan, or China, and then exported and sold in the United States. Use of synthetic cannabinoids peaked between 2011 and 2013 and then declined somewhat. Use of these drugs is still a significant health concern, and their use and abuse may occur in a cyclical fashion.

NIDA reports that the potency of many of these synthetic cannabinoids is many times that of the THC in cannabis products, indicating that use of these products most likely results in significant physical and psychoactive effects. In 2016, the Centers for Disease Control and Prevention (CDC) listed a number of documented cases of overdose and poisoning involving synthetic cannabinoids that occurred between 2010 through 2015. According to data from the CDC:

In cases where multiple drugs were used, the most common drugs used in association with synthetic cannabinoids were:

The data from the CDC suggested that the shifting patterns in the number of calls to poison control centers may suggest a rising trend of abuse of these drugs. In addition, recent news stories have covered mass issues with overdose occurring in individuals using synthetic cannabinoids.

For example, in April 2016 in the Skid Row area of Los Angeles, California, 10 people were hospitalized as a result of synthetic cannabinoid overdose. In July 2016, 33 people in New York City were hospitalized, many comatose, as a result of suspected Spice overdose. In these cases, the individuals had only been using Spice for a brief period of time. According to reports at the scene in both the New York City and Los Angeles cases, the individuals had taken between two and several puffs of Spice before collapsing.

In both of these cases, it is suspected that the individuals had received a “bad batch” of the substance; however, as seen from the CDC data above, Spice use appears to be associated with a number of detrimental physical, mental, and cognitive effects. As a result, any batch of Spice could be a “bad batch.”

What Is Known about Spice Overdose

As mentioned, synthetic cannabinoids are not regulated in any way by any overseeing body. The specific substance, potency, and addition of any other substances in products labeled as Spice, K2, etc., can vary significantly from batch to batch.

Many synthetic cannabinoids are also associated with the development of physical dependence as a result of chronic use. Individuals who regularly use these drugs for significant periods of time (more than a few weeks) are likely to develop issues with tolerance and withdrawal. Withdrawal symptoms can be significant, including issues with tremors, nausea and vomiting, diarrhea, mood swings, heart palpitations, insomnia, and other symptoms. Use of benzodiazepines on a tapering schedule has been recommended for the treatment of withdrawal to synthetic cannabinoids.

It appears that the majority of fatalities associated with Spice overdose occur either as a result of using Spice with other drugs or as a result of suicidal behaviors that occur in some people who take high amounts of these substances. The CDC and several other sources report several cases of overdose fatalities suspected as the result of Spice use alone.

At the current time, it is difficult to ascertain the long-term effects of overdose on synthetic cannabinoids. NIDA and other sources suggest that overdose is most likely associated with significant damage to the brain in some cases and perhaps damage to other organs, such as the liver and/or kidneys. A number of research studies have confirmed these potential issues using animal models.

For example, a 2015 study in the journal Biomolecules & Therapeutics investigated the neurotoxic effects of two synthetic cannabinoids labeled JWH-081 and JWH-210 in rodents. Results indicated that use of these two substances was associated with damage to an area of the brain known as the nucleus accumbens, an area important in movement and certain aspects of cognition; damage to the structures in the nucleus accumbens has long been observed as one of the hallmark features of individuals who have Parkinson’s disease.

cannabinoids are not readily detected by normal laboratory tests. This means that individuals presenting to an emergency department with severe symptoms as a result of an overdose of synthetic cannabinoids may not be recognized as having this particular issue. Treatment providers would have to rely on the self-report of the individual or their friends as opposed to most formal laboratory tests to detect the presence of these substances in the system. This makes dealing with an overdose of synthetic cannabinoids rather tricky, as sometimes the overdose symptoms actually look like an overdose of some other drug or some other medical condition.

There is no formal treatment protocol to use when addressing the issues associated with an overdose of synthetic cannabinoids. This is because there are many different substances that fall under this category; the levels associated with an overdose for these substances are not well recognized; and the symptom profile is not unique to this particular substance, nor it is well described.

In most cases, the treatment approach would be based on symptom management of the particular case. This might include:

herbalmarijuanaside effects
Prefer getting help via text?
We're available 24/7 via text message. Signup below for access to our team when its convenient for you!
and many more...
✕
Instantly Check Your Insurance Coverage
Your information is safe & secure
At Laguna, we accept most types of private (non-government) insurance and offer a variety of payment options.
You can quickly and privately check your insurance benefits to see if you're covered for addiction treatment services. We’ll be able to tell you if your provider is in network with Laguna Treatment Center and all American Addiction Centers locations.
This means your treatment may be FREE1 depending on your policy, copay, and deductible.
What's next for you?Recovery is possible. We're here to help with your addiction.