Addiction in the News

In recent years, the advance of the opioid epidemic has yielded increasingly grim headlines. Much of this coverage emphasizes the unprecedented number of overdose fatalities, while other reports describe new and potent threats such as fentanyl. Of course, dire descriptions of the dangers of drugs are a time-honored tradition in the American media: Coverage of the country’s drug problems has a long (and even controversial) history. But in an increasingly digital media ecosystem, how have journalists kept step with this latest drug crisis? Has reporting been consistent and substantive – or do sensational stories arrive too late to meaningfully inform the public?We set out to study these questions, utilizing an open-source media-tracking platform called Media Cloud. Using their data, we’ve analyzed the publication of digital news articles regarding a range of drugs between 2010 and 2017. Keep reading to learn how coverage of various substances has evolved in response to an emerging crisis.

Although the term “opioid epidemic” wasn’t widely used in the early 2010s, the crisis’s origins are evident in the coverage from that time. Between 2010 and 2015, roughly half of all drug-related stories mentioned heroin. Similarly, OxyContin, which many experts blame for fueling the epidemic, attracted a substantial amount of coverage in the early years of the decade. It’s worth noting, however, these narcotics also vied with methamphetamine for public attention during this period. In 2012, about 1.2 million Americans reported using meth – although rates of use have since declined.

More recently, however, coverage of the opioid crisis seems to have dominated the digital news. Opioids surged to become the most covered drug-related subject in 2017 as publishers began to favor a broader focus, rather than emphasizing heroin alone. Similarly, fentanyl went largely unmentioned until 2016, when it began to attract coverage for its terrifying potency. Some suggest the substance began to infiltrate the heroin supply chain as early as 2013, implying the press’s attention to this deadly threat lagged far behind its appearance on American streets. 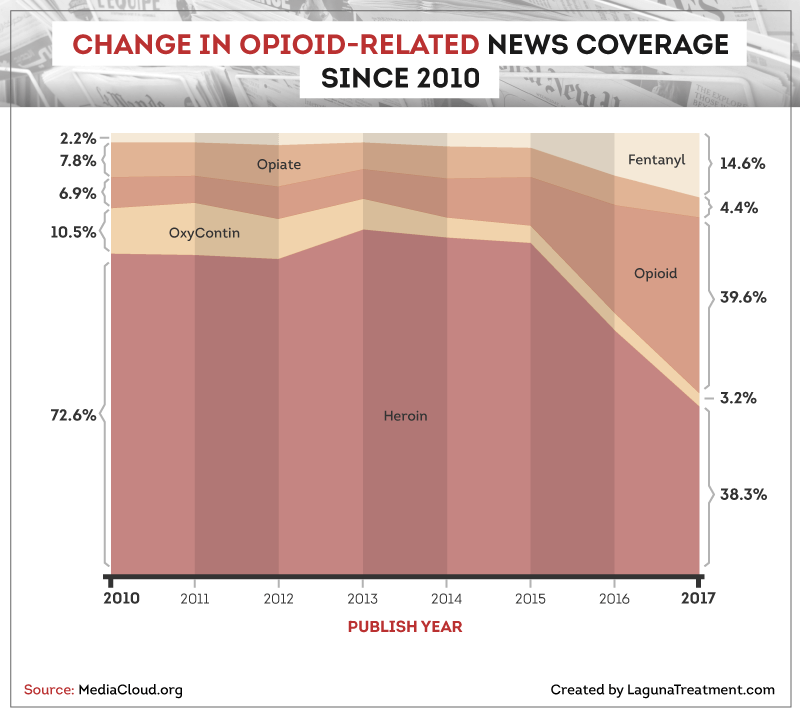 Given the recent media maelstrom surrounding the opioid epidemic, we considered how coverage of opioids changed between 2010 and 2017. As noted earlier, the term “opioid” grew in popularity over this period, likely because its catchall quality was useful in describing a crisis that included many distinct drugs. Perhaps for the same reason, coverage invoking the term “opiate” declined over these years. Because opiates are technically a subclass of opioids, the more focused term could not be accurately used in stories describing some synthetic drugs.

Mentions of OxyContin dropped precipitously as well by 2017, perhaps because many previous users had moved on to cheaper and more powerful opioids by that time. Heroin’s percentage of all opioid coverage likewise declined as more potent alternatives entered the public discussion, such as fentanyl and carfentanil. These novel substances attracted attention via viral coverage related to their strength, including one account of an officer overdosing from touching it that experts later disputed.

Your Story Matters Most

Our findings reveal which substances are currently attracting the news media’s coverage – and generating public outcry as a result. But no sensationalist narrative can truly attest to sufferings of those dealing with substance misuse or the pain endured by their loved ones. Coverage of substance misuse issues can be immensely valuable, but only if it prompts greater awareness and action. We hope reports of addiction impress the seriousness of the problem on the public but also inspire compassion and concern.

For those who embrace the resources of recovery, however, a different story can emerge: one of hope. If you or a loved one has been affected by the ongoing drug epidemic, it’s never too soon – or too late – to seek the services you deserve. Our team will help you find trustworthy treatment suited to your needs so that you can embrace a full and fulfilling life again.

We collected data from mediacloud.org using their public API, which allows registered users to sort through over 5 million records of online news from over 25,000 media sources. We analyzed all coverage surrounding the following terms (MDMA, OxyContin, fentanyl, opiate, opioid, heroin, Percocet, Xanax, Adderall, methamphetamine) between Jan. 1, 2010, and Jan. 1, 2018. No statistical testing was performed, so the claims listed above are based on means alone. As such, this content is purely exploratory, and future research should approach this topic more rigorously.

If you’d like to share or use our content, you’re free to do so for noncommercial purposes. Please just provide a link to this page to attribute us appropriately. We may not be news media, but proper sourcing matters.