More Americans died from drug overdoses in 2016 than in the Vietnam War and the war with Iraq combined. The majority of these overdoses weren’t caused by an illegal drug that caused, but rather one that had benign and beneficial beginnings: opioids.

According to some experts, our current opioid crisis can be traced back to doctors who, in an eagerness to combat patients’ pain and suffering, overprescribed the drugs. They did this under the misconception that people can’t get addicted to opioids. But addiction isn’t the only danger of legal drugs.

It’s easy to point an admonitory finger at heroin or cocaine. Less easy to spot are the dangers lurking in our own medicine cabinet. But legal drugs and medicines can prove just as dangerous as the ones on the street. The FDA recalls thousands of legal drugs and devices each year.

We analyzed FDA recall data from the past eight years to pinpoint which drugs and devices are recalled the most and for which reasons. Keep reading to see what we found.

What Causes a Recall? 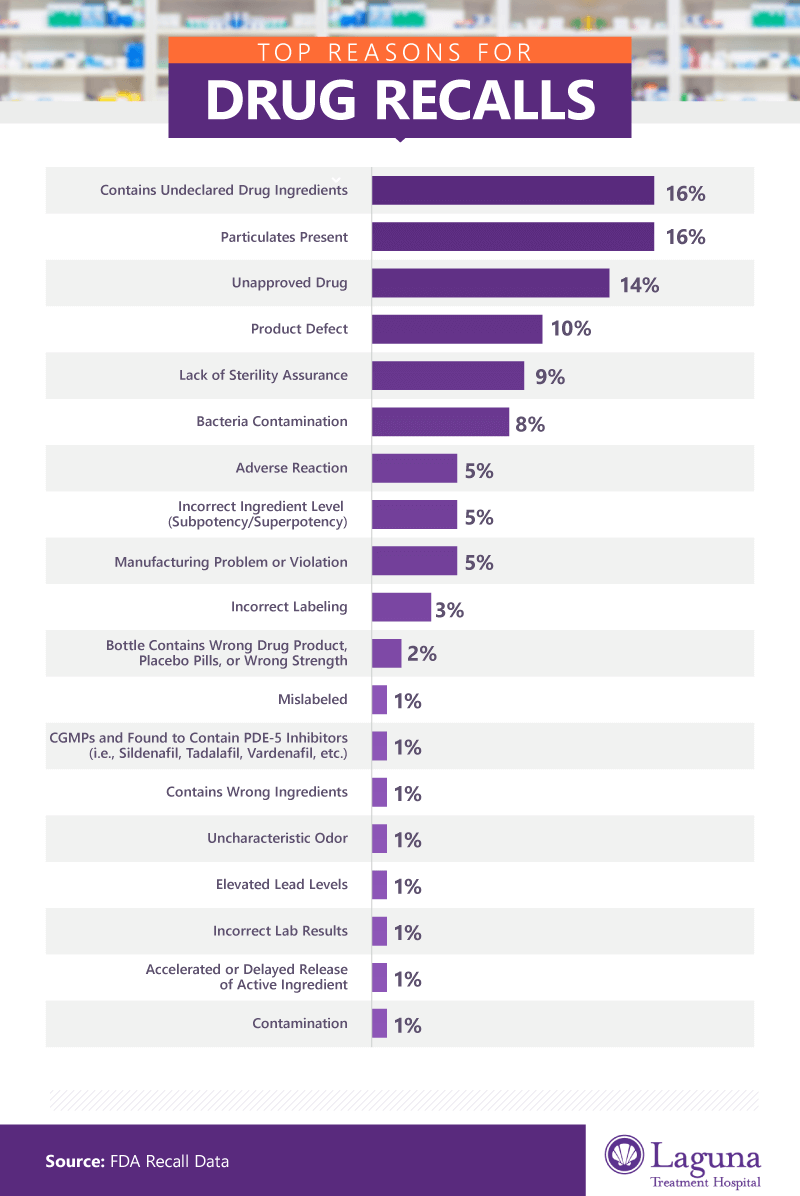 Drugs are recalled to remove them from the market when they’ve been deemed unsafe or are in violation of FDA laws. Recalls may stem from things such as incorrect ingredient levels, the use of undeclared or unapproved drugs, or contamination.

The FDA is not required to publicly recall products. A public warning is reserved only for “urgent situations where other means for preventing use of the recalled product appear inadequate,” according to FDA guidance on recalls. The recalling firm will work in conjunction with the FDA to determine if a public warning is necessary.

Recalls due to undeclared drug ingredients, visible particulates like glass, and unapproved drugs are the top reasons for medical recalls through the FDA. In May 2018, Fluticasone Propionate Nasal Spray by Apotex Corp was recalled due to the presence of small glass particles in the product.

When it comes to contamination, bacteria are the most common forms to result in drug recalls. In May 2018, Shadow Holdings recalled its X-Jow and Acne Shave products when it found cases of bacterial contamination in the products. These contaminants could result in potentially serious bacterial infections in immunocompromised individuals. 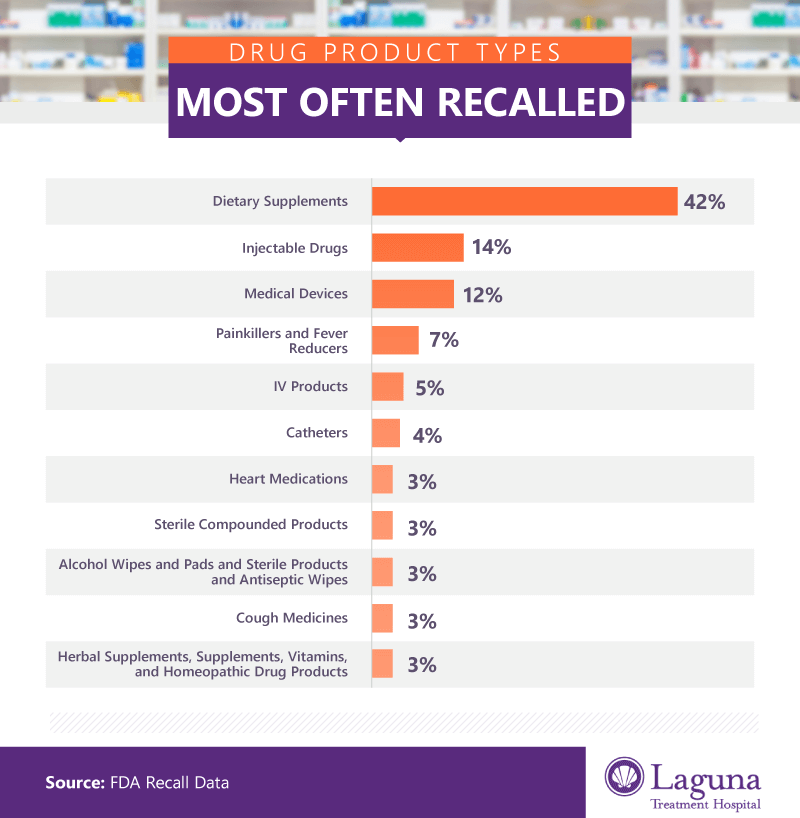 The chances of a drug being recalled vary by product type. At 42 percent of the recalls, dietary supplements are, by far, the biggest culprits. The next highest rate of recalls is for injectable drugs, but at 14 percent, these are recalled far less often than dietary supplements.

Medical devices are recalled almost as often as injectable drugs. These are followed by painkillers and fever reducers, IV products, catheters, and heart medication. 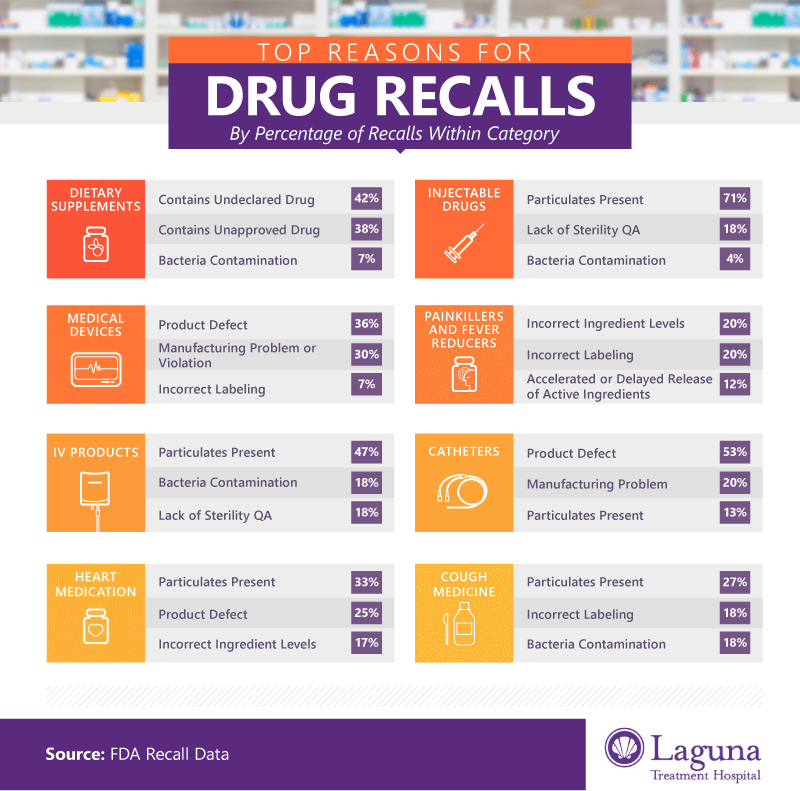 Products are commonly recalled for different reasons. The vast majority of injectable drugs are recalled due to the presence of particulate matter. These particles could be natural growths such as mold or man-made materials like glass or rubber. In June, Hospira, Inc., a Pfizer company, voluntarily recalled an injectable opioid antagonist product after particulate matter was found in syringe plungers. Glass was the most common particle contamination in our findings, including multiple instances of glass particle contamination in a potassium phosphate injection and heart medications manufactured by American Regent.

One in 3 heart medication recalls are due to particulates being present, making it the most common cause of recalls for these products. It’s also the most common reason for recalls of cough medicine, followed by incorrect labeling and bacteria contamination.

Bacterial contamination is also one of the leading recall reasons for dietary supplements, which include vitamins, minerals, protein supplements, weight loss pills, and even herbs taken for medicinal purposes. Dietary supplements that are recalled are most likely to be made with undeclared drug ingredients or drugs unapproved by the FDA. 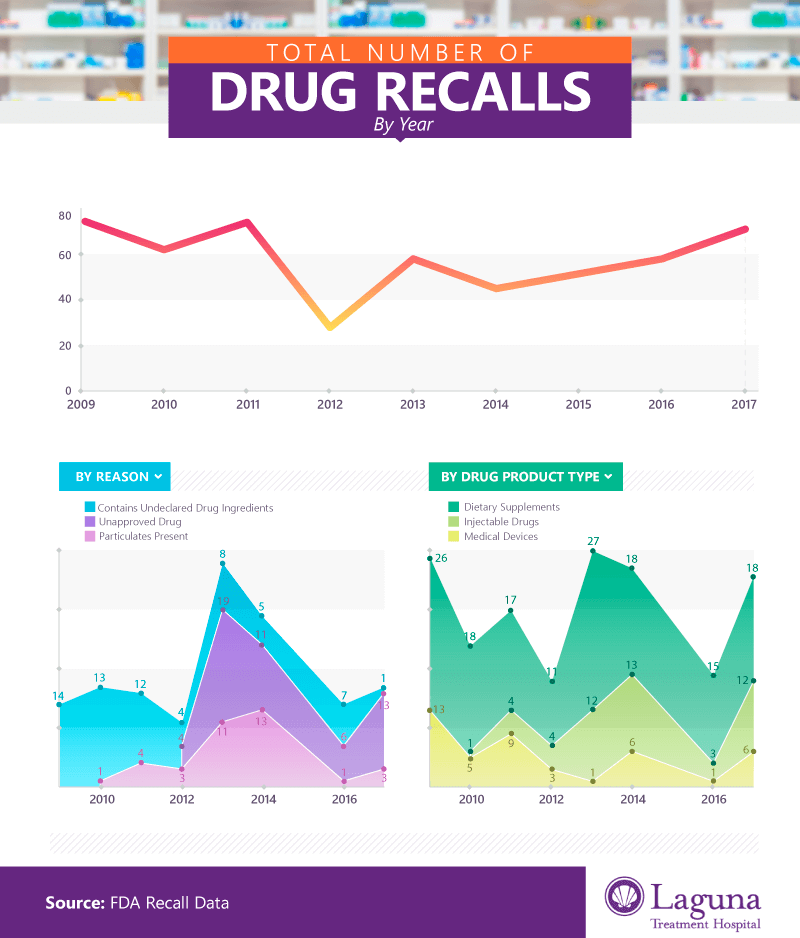 Drug recalls have been steadily increasing since 2014. In 2012, recalls fell to their lowest point since 2009, on the tails of the Food and Drug Administration Safety and Innovation Act, which was signed into law on July 12, 2012. The act improved drug supply chain safety by authorizing the FDA to address the challenges of a global drug supply chain and collect drug user fees to finance drug and product reviews. 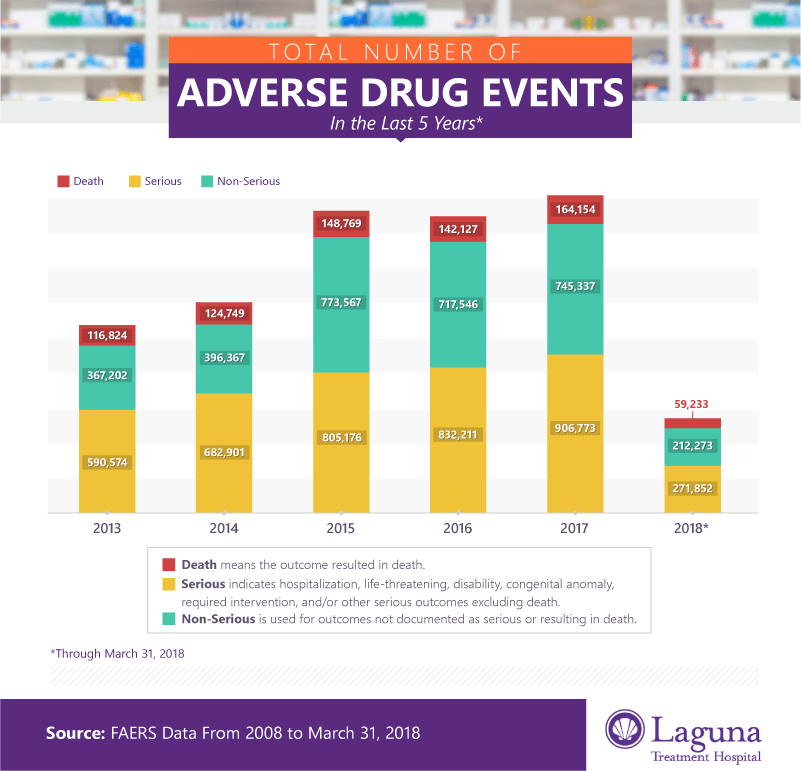 Adverse reactions are “any undesirable experience associated with the use of a medical product.” These range from illness-like symptoms such as a fever or a headache to life-threatening side effects or even death.

The FDA categorizes adverse events as serious, non-serious, and resulting in death. Serious events are considered life-threatening instances not resulting in death. They may require intervention or result in hospitalization, disability, a congenital anomaly, or any other serious non-fatal outcomes. Non-serious outcomes cover all other adverse events that fall outside the spectrum of serious or fatal. 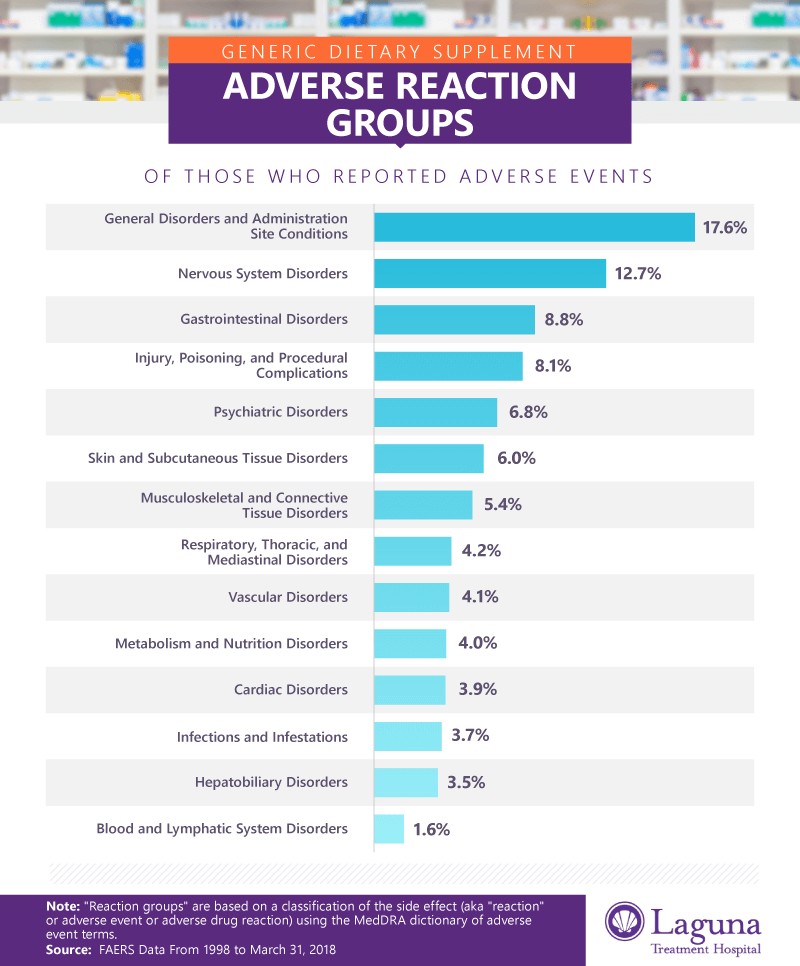 The most common adverse reaction group to dietary supplements are general disorders and administration site conditions. These can be whole body side effects like fevers, tremors, or fatigue. Conversely, the reaction can be limited to the injection site such as on-site soft tissue necrosis, which includes a variety of bacterial and fungal infections that can cause tissue destruction, system toxicity, or even death.

In 6 percent of cases, skin and subcutaneous tissue disorders extend beyond the injection site. But nervous system disorders such as seizures or difficulty walking or seeing are more common than skin disorders. The other most common reaction groups are due to gastrointestinal disorders and injury, poisoning, or procedural complications. 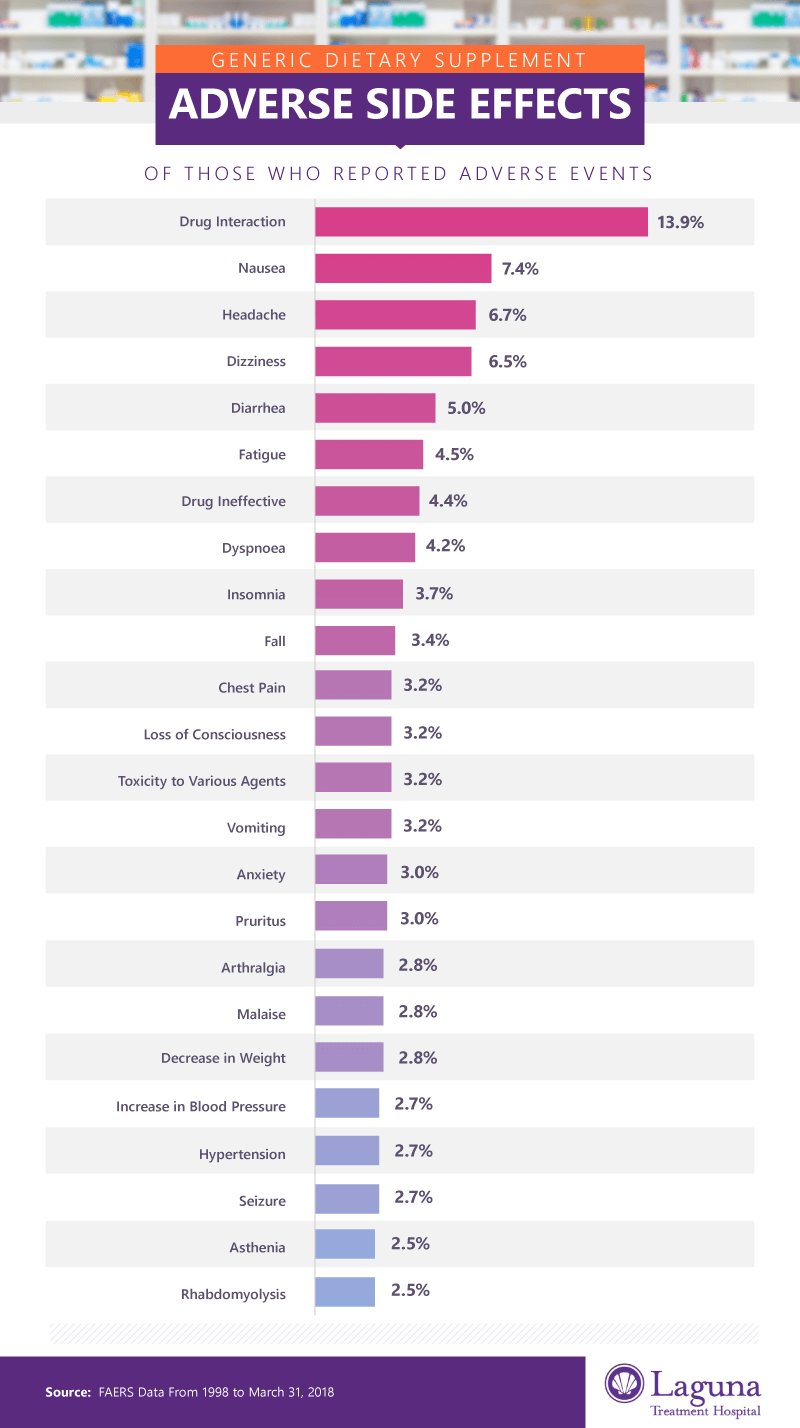 The most common adverse reactions to dietary supplements are caused by drug interactions. Drug interactions can be drug to drug – when two or more drugs react with each other. They can occur between drugs and food or drinks, such as when alcohol is mixed with a drug. Or they may happen when users have an existing medical condition and taking certain drugs turns dangerous.

Other common adverse side effects to dietary supplements include nausea, headaches, dizziness, diarrhea, and fatigue. Fatigue is distinguished from abnormal physical weakness or lack of energy, which is called asthenia and results in 2.5 percent of adverse reactions.

Dyspnoea is the medical term for difficulty breathing and causes 4.2 percent of adverse reactions to dietary supplements. In 3 percent of cases, the sufferer experienced severe itching of the skin – known as pruritus.

Insomnia and a loss of consciousness occurred in over 3 percent of adverse reactions. Slightly less common is arthralgia, or joint pain. Rhabdomyolysis is when muscle tissues die and release a damaging protein into the bloodstream. While this only occurred in 2.5 percent of adverse reactions to dietary supplements, it can lead to serious complications such as kidney failure.

Even legal drugs can be dangerous, especially if they’re misused. When taking prescription or over-the-counter medications, it’s important to follow the directions of your doctor or pharmacist. Read the safety information on the label, and avoid mixing drugs without your doctor’s consent.

If you or someone you love is struggling with drug misuse or addiction, an individualized treatment plan can help you navigate the road to recovery. You can choose to live without addiction. Laguna Treatment Hospital is here to help.

We analyzed 478 recalls reported by the FDA from 2009 through 2017. Recalls reported in the data that were not drug- or medical-related were excluded from the study. Additionally, we used FDA Adverse Event Reporting public data to analyze adverse reactions reported to the FDA.

Regarding “reaction groups,” investigations accounted for 9.6 percent of the shown data and were excluded because we couldn’t determine a definition for the term.

Feel free to share the findings of this study with your audience for noncommercial use only. When doing so, make sure to link back to this page so that the authors receive credit.