The roots of the American opioid crisis run deeper than many assume. Experts date the epidemic’s origins to the late ’90s when pharmaceutical companies downplayed their drugs’ addictive potential to market them aggressively. But if the last 20 years have seen opioid addiction steadily escalate across the country, public outcry is a relatively recent phenomenon. In 2014, a Pew Research Center study found less than a third of Americans regarded drug misuse as a crisis, despite a record number of drug overdose deaths that year.

Since that time, the crisis’ death toll has only accelerated, threatening to claim half a million lives by 2027. Due to the emergence of the deadly synthetic opioid fentanyl, overdose is now the leading cause of death for young Americans. But as the opioid epidemic grows ever more menacing, has public awareness of this threat increased as well?

In this project, we surveyed 999 people on their perceptions of the drug epidemic and compared their responses to a 2014 Pew Research Center study. Our findings demonstrate how a rising tide of death has altered public awareness of the epidemic – and how many of us remain blissfully ignorant of the crisis in our midst. 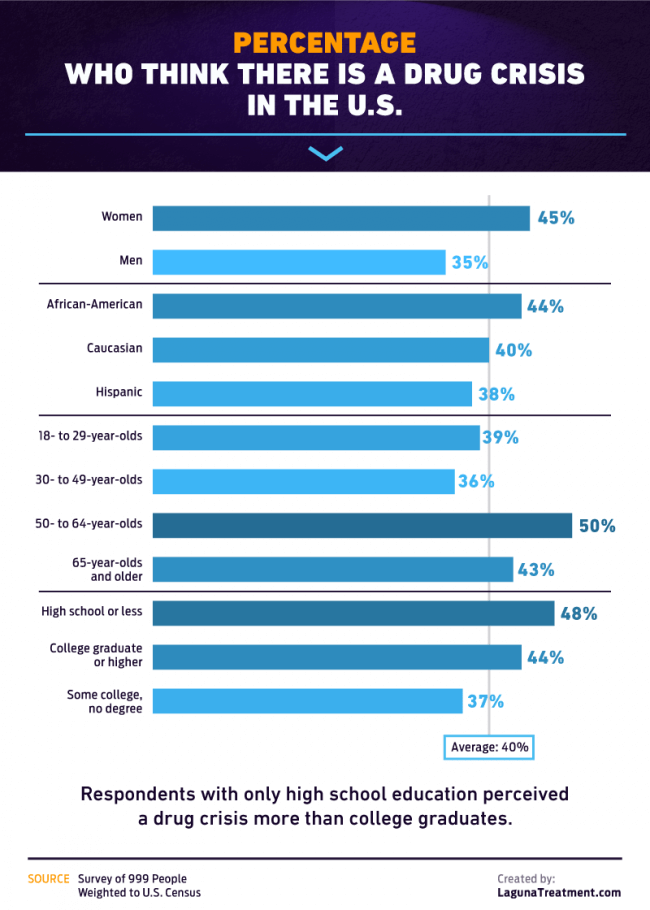 Despite presidential declarations and an ever-growing death count, merely 40 percent of respondents believed the U.S. was currently enduring a drug crisis in 2018. Women were significantly more likely to identify a crisis than men, however; some research suggests women have been particularly impacted by the overprescription of opioids. Likewise, a greater portion of black Americans felt the term “crisis” was appropriate. Interestingly, many prominent African-American activists and scholars have expressed frustration on this subject: Although the opioid epidemic is now affecting predominantly white communities, they assert, black families have experienced the drug crisis for decades.

Notably, formal education and awareness of the crisis were not closely correlated. Perhaps this knowledge is the result of the more direct experience of the crisis’ effects, however: Overdose deaths have been particularly common among those with only a high school degree – and even more frequent among Americans without one.

In fact, those without any college experience were the most likely to identify America’s drug problem as a crisis. 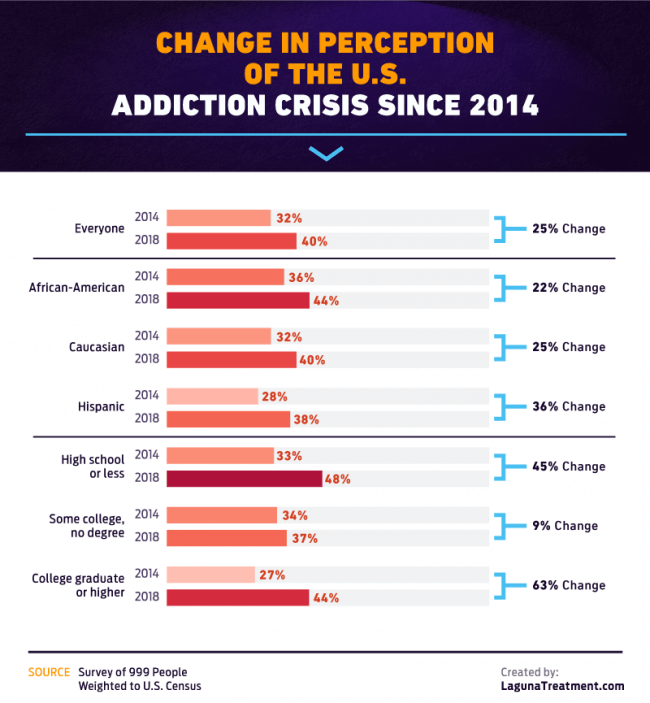 Although a majority of people in the U.S. still do not call drug misuse in America “a crisis,” our data revealed that Americans were 25 percent more likely to admit to a modern addiction crisis than they were four years ago. Specifically, those with a college degree or higher saw the largest uptick (63 percent increase) in their rates of admitting to a crisis in 2018. Lesser educated demographics became more aware of the crisis as well, though not to the same extent as college graduates.

Scientists warn that these younger age groups, or 18- to 25-year-olds specifically, are at the highest risk for opioid abuse, so their increased admittance to the problem is perhaps more essential than any other educational demographic.

Results from respondents identifying as Hispanic also seemed to indicate a much-needed perception increase from 2014. This community was 36 percent more likely to perceive the crisis this year. The percentage of respondents that were African-American admitting to the status quo increased by just 22 percent from four years ago. Though the vast majority of those who die from overdoses are white, caucasians were only 25 percent more likely to admit to a nationwide crisis than they were in 2014.

Too Close to Home? 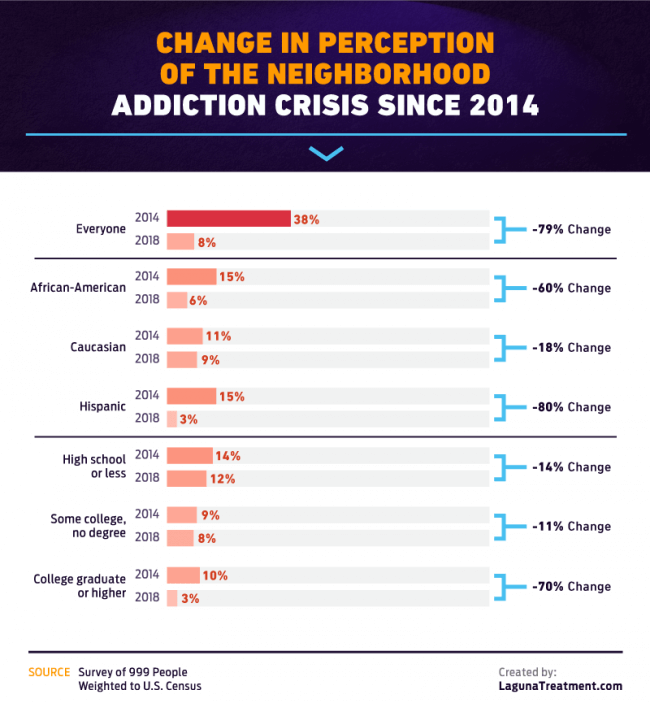 In virtually every demographic, a smaller percentage of respondents identified a crisis in their own community than in the 2014 Pew Research Center study. Overall, Americans are 79 percent less likely today to perceive an addiction crisis in their neighborhood as they were four years ago.

Diagnosing a national problem is one matter; confronting it in your own community is another altogether. Though our 2018 data revealed growing acknowledgment of a drug crisis in America, surprisingly few respondents indicated their own neighborhood as currently severely affected.

It’s certainly possible many of our respondents live in neighborhoods that have been largely spared from the ravages of opioid addictions. But when one considers the far-reaching effects of the epidemic, it’s also quite likely many underestimate the degree to which their local area is struggling. After all, the last few years have caused the nation to reconsider what a neighborhood affected by drug use looks like: Rural and suburban communities are suffering in addition to the urban environments often associated with drugs in media portrayals.

Recognizing the Crisis by Region 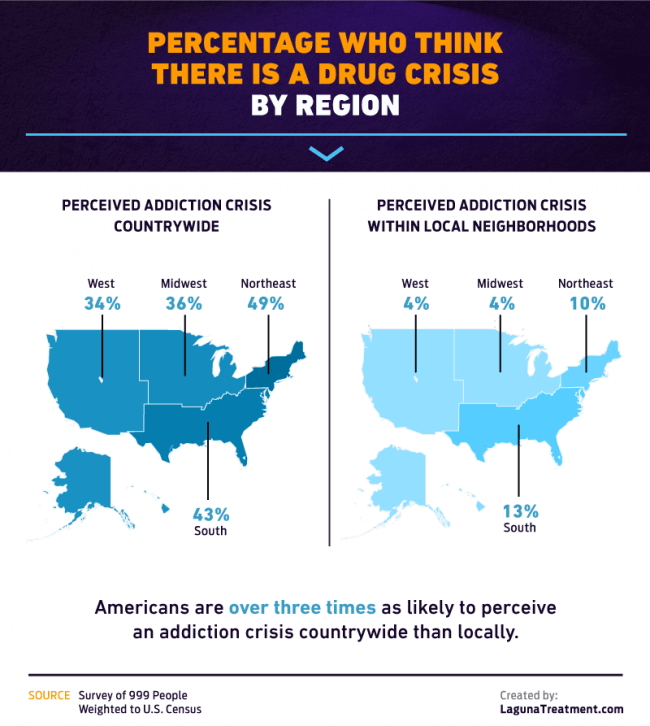 Taking a geographical view of varying concern, the Northeast was the most likely to call America’s drug problem a crisis.

Nearly half of respondents from that region identified it as such, which may reflect the devastation experienced by New England states such as New Hampshire. Interestingly, however, just 10 percent of Northeasterners felt drugs posed a crisis in their own communities. This disparity was evident in all regions, which may indicate denial on the part of respondents about their neighborhoods – or that shame keeps us from disclosing our struggles to our neighbors.

Southerners were the second most likely to call America’s drug problem a crisis and the most likely to feel that crisis was present in their local communities. More than a third of respondents from the Midwest called the issue a crisis as well, although some will be surprised this figure was not higher. States like Ohio and Wisconsin have seen unprecedented death tolls, causing some experts to deem the Midwest the epicenter of the national crisis. 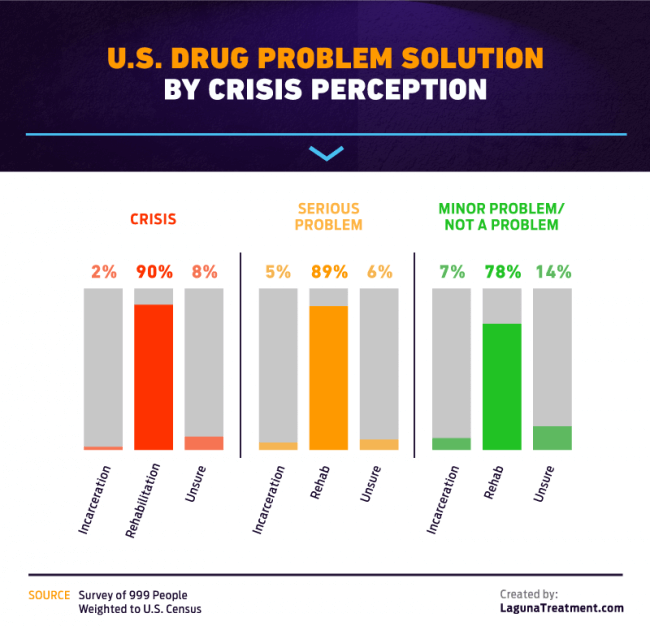 In the absence of a viable solution, recognizing a serious problem doesn’t mean much. But whether they felt the country’s drug problem could be called a crisis, the overwhelming majority of respondents thought treatment was the best response to drug addiction. Many lawmakers and experts agree, arguing more federal funding should be allocated for treatment in future budget deals. Some legislators have also considered the incarceration approach, although only a small portion of respondents favored this perspective. In 2017, senators evaluated harsher penalties for traffickers caught selling dangerous synthetic opioids.

When we compare the perspectives voiced by our 2018 participants to their 2014 predecessors, however, we see the enthusiasm for incarceration has dramatically declined in recent years. In the 2014 poll, more than a quarter of respondents favored imprisonment as a method to address the nation’s substance misuse issues. In 2018, just 4 percent of respondents said the same.

This change of heart was evident in every single demographic group to some extent. The shift in preference for treatment rather than incarceration even transcended political affiliation: 42 percent of Republicans supported incarceration in 2014, but just 12 percent did so in 2018. Accordingly, criminal justice reform has become a rare source of bipartisan enthusiasm in recent years – so much so that Republicans and Democrats united to oppose tougher drug crime penalties the Trump administration proposed in 2017.

Our findings demonstrate growing awareness of the severity and scale of our nation’s drug misuse troubles. Many of us remain unsure this issue deserves to be addressed as a true crisis – a concerning indifference given the thousands of lives the epidemic has claimed already. As communities across the country suffer from widespread drug misuse, one thing remains tragically clear: For the families who have lost loved ones, the crisis is undeniable.

But for those who recognize the effects of the crisis in their own lives, there’s still much reason for hope. If you or someone you love is among the millions struggling with substance use today, let us help you leap from suffering to sobriety. With the empathy and expertise of the team at Lagunatreatment.com, seeking the right treatment is as simple as it should be.

We surveyed 999 Americans, 33 percent of whom had an addiction at some point. For several questions, we closely followed the format of the original Pew Research Center study to compare changes in perception of addiction since 2014. Forty-five percent were men, 55 percent were women, and less than 1 percent identified as a gender not listed in our study. Our participants ranged in age from 18 to 76, with an average of 37 and a standard deviation of 11. The data yielded from the survey were then weighted using the U.S. census for gender, age, and state to reflect the current population.

We welcome your help in spreading awareness of America’s drug crisis. Accordingly, feel free to use our images and information to share our work with your own audience for noncommercial purposes. When you do, please provide a link to this page so that your readers can explore our full findings. Together, we can help more Americans recognize the crisis than ever before.