America’s addiction crisis today is undeniable. Despite earning mainstream media attention in recent years, the number of opioid overdoses rose by nearly a third in just 14 months between 2016 and 2017, according to the Centers for Disease Control and Prevention.

Overall, the number of drug overdoses and other consequences of addiction continue to rise. In 2016, roughly 64,000 people in the U.S. lost their lives to drug use, and more face growing concerns of hepatitis and bacterial infections as a result.

As the impact of addiction becomes more and more palpable, the solution becomes more muddled. From suggestions of capital punishment for drug dealers to safe injection facilities in some cities, there seems to be no true consensus on how to approach this crisis. At their core, these opinions may be influenced by the stigmas and perceptions associated with drug use and addiction.

To learn more, we polled 999 people, including those who’ve had an addiction and those with no firsthand experience, to learn how well they understand the nature of substance misuse. Read on as we explore how many people believe addiction is a disease, their opinion on how it should be treated, and who is ultimately responsible for coming up with a solution.

Pulse of Addiction in America 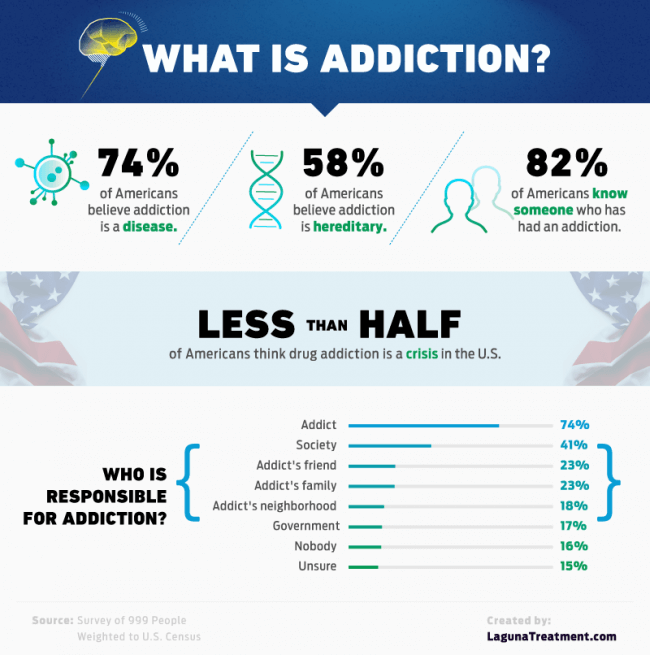 The overwhelming consensus among researchers is clear: Addiction is a disease. Because of the way substance use impacts the brain and the chemicals associated with both the pleasure and reward receptors, those using drugs often stop caring about their own health or survival. Studies go on to suggest that for as many as half of drug users, addiction is a chronic disease requiring continuous care to avoid progression or relapse.

While not everyone agreed on the causes or definition of addiction, many people experienced its impact firsthand. More than 4 in 5 participants knew someone who had an addiction at some point. But less than half said addiction was a crisis in the U.S.

Even among researchers, the classification of addiction as a disease has been debated. While a majority recognizes the impact of drugs on the mind and resulting compulsive behavior, this perspective isn’t unanimous.

As we found, some demographics were more inclined than others to believe the neurological impact of addiction. Among political affiliations, 83 percent of Democrats said addiction was a disease compared to just 68 percent of Republicans.

Research suggests there’s no difference in the likelihood of having an addiction based on political affiliation, although there are certainly differences in the way lawmakers approach solutions to addiction. While the Obama administration approached addiction as a disease needing medical care, Jeff Sessions, under President Trump, has pursued an agenda in favor of harsher law enforcement instead. 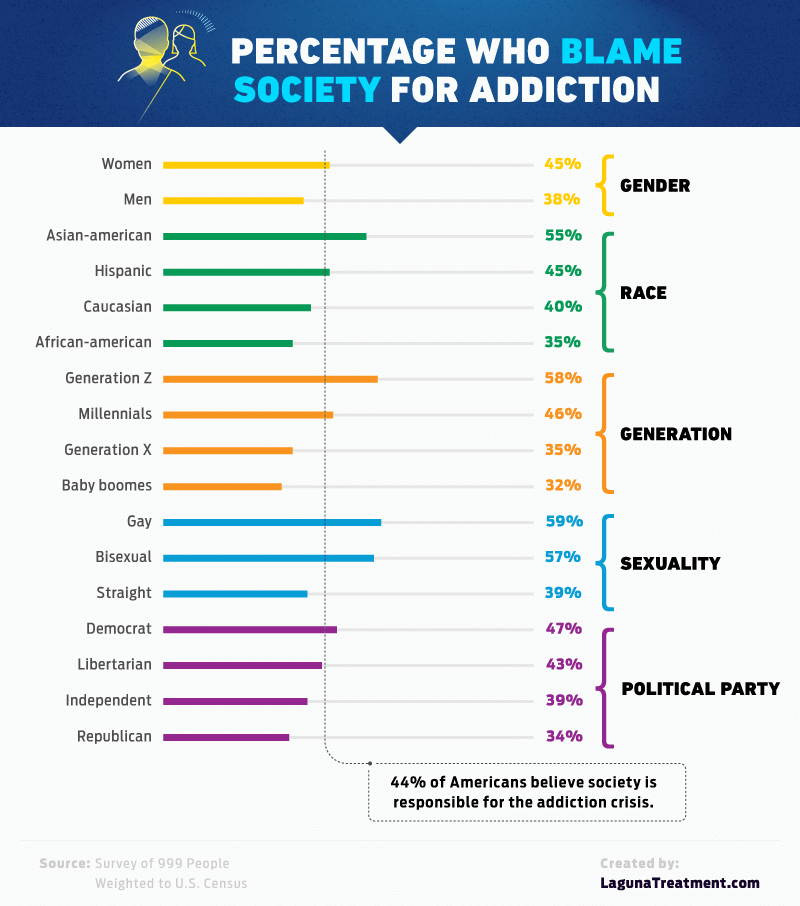 People who use drugs have historically faced severe stigmatization. For those with an addiction, this stigma can act as a barrier between drug use and support and care. Despite research linking addiction to the same medical causes and symptoms as any other disease, those experiencing substance misuse are less likely to be offered help than those with a mental illness or physical disability. Even some health care professionals hold these stigmatized perceptions, which can prevent those in need from seeking support or treatment.

Less than half of Americans believed society was responsible for the addiction crisis. That said, 59 percent of respondents identifying as gay believed society was an underlying cause of addiction. Overall, members of the LGBTQ community are twice as likely as heterosexual adults to use illicit substances, and roughly 30 percent have an addiction. 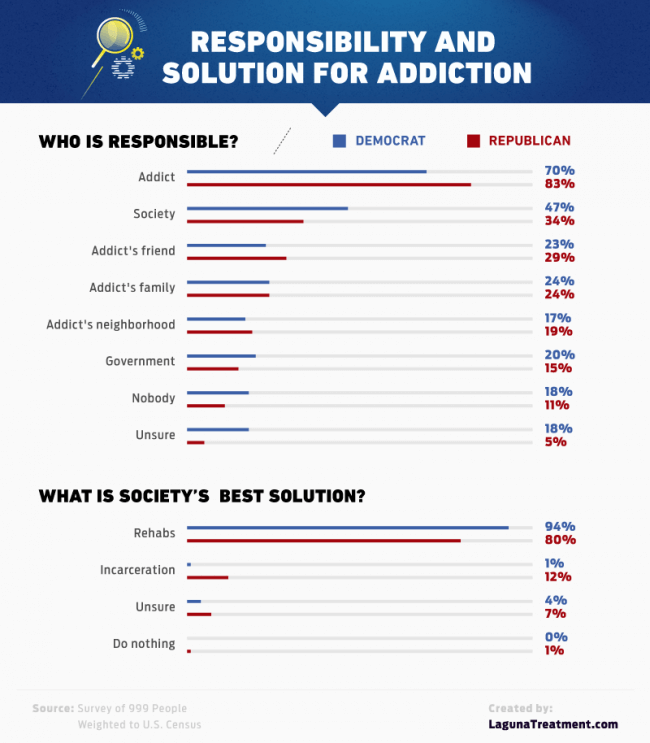 Republicans and Democrats had different opinions on who was ultimately responsible for addiction and how to solve the crisis.

While 83 percent of Republicans suggested the substance user was responsible, only 70 percent of Democrats agreed. Still, no response was unanimous. More than 1 in 3 Republicans and nearly half of Democrats also said society was responsible for this pandemic. Roughly 1 in 4 respondents from both political affiliations also placed the blame on the substance user’s family or friends. Substance misuse can have a profound effect on the families it touches, and experts typically suggest family counseling to involve everyone in the recovery process.

Ninety-four percent of Democrats and 80 percent of Republicans believed rehabilitation was the best solution for drug addiction. Studies show substance users who get and remain in treatment typically stop using drugs and regain their social and psychological functionality.

As with treatment for many other diseases, relapse can occur. This doesn’t mean addiction treatment or rehab is a failure, though. Successful rehabilitation often requires adjustments to or alternate treatments throughout a person’s journey. Twelve percent of Republicans and only 1 percent of Democrats believed incarceration was the best solution for addiction. 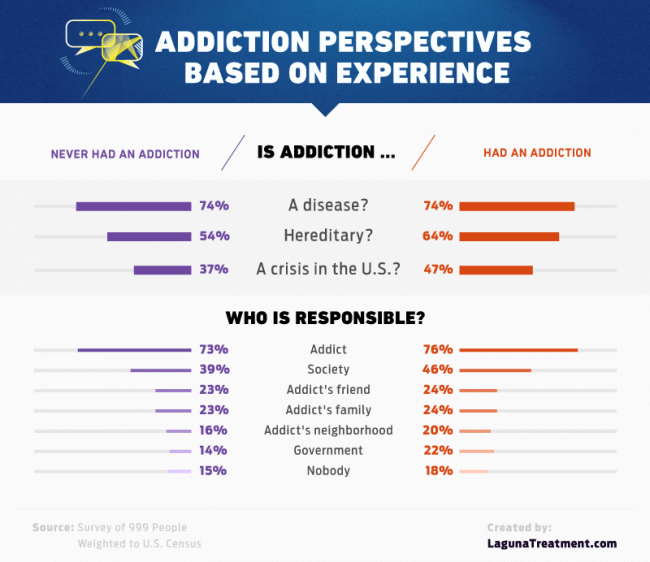 Regardless of the substance or behavior, it can be hard to understand addiction if you haven’t experienced it firsthand. The internal struggle, self-doubt, and sense of dependence can be hard to articulate, often leading substance users to spend more time with people who share their habits. 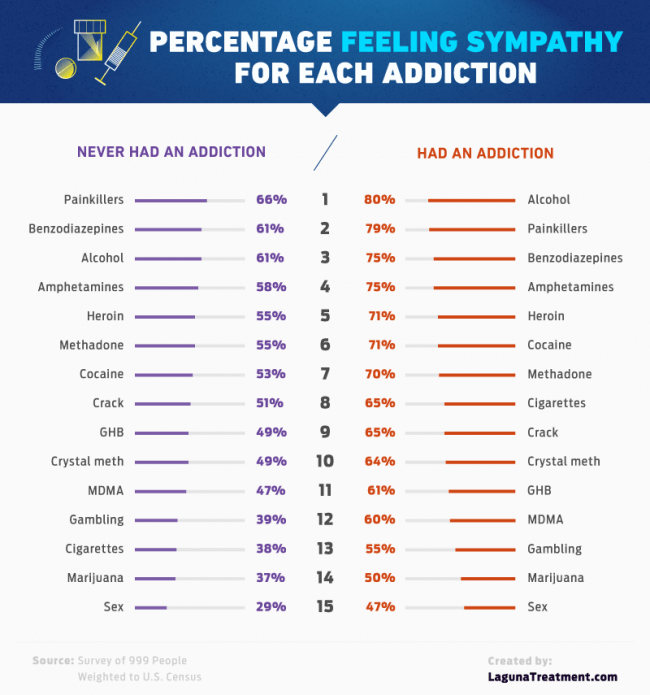 If someone you love has an addiction, compassion doesn’t enable them – it can be the guiding force they need to seek treatment. As opposed to waiting for a substance user to ask for help, experts recommend friends and family encourage them to reach out for support instead. Studies also show friends and family can have a positive impact on a substance user’s motivations during the recovery process.

According to our analysis, the biggest sympathy gaps between former addicts and non-addicts were related to alcohol, cigarettes, and sex. Despite largely open access to nicotine, research suggests cigarettes can be more addictive than other drugs and just as deadly in the long term.

Between 2000 and 2016, more than 600,000 people lost their lives to drugs, including an average 115 each day from opioids. While the path forward may not always be clear, many people agreed on the most fundamental facts of addiction. Most recognized addiction as a disease, and many believed it was hereditary. More importantly, a vast number of people (including former addicts) suggested the best possible solution for addressing this crisis was rehabilitation.

If you or someone you love is dealing with drug misuse, it’s not too late to turn a life around. At Laguna-dev.bigdropinc.net, our mission is to help you understand the impact of substance misuse and find a treatment plan that works for your life. From our online forums to expert insight on prevention, detox, and recovery,  Laguna-dev.bigdropinc.net is here to help you overcome addiction today.

We surveyed 999 respondents from the U.S. Of this group, 34 percent experienced an addiction. Forty-five percent were men, 55 percent were women, and less than 1 percent identified as a gender not listed in our study. Our participants ranged in age from 18 to 76, with an average of 37 and a standard deviation of 11. The data yielded from the survey were then weighted using the U.S. census for gender, age, and state to reflect the current population.

Knowing you’re not alone with drug misuse can often be very helpful. Feel free to share this information with anyone who may benefit from reading it for noncommercial purposes. Just be sure to link back to this page, so the researchers and authors behind it can receive credit for their work.