Is Atorvastatin (Lipitor) a Drug of Abuse?

Statins are a group of medications that block an enzyme produced by the liver, so that blood cholesterol levels reach a normal, healthy level. Some cholesterol is important, but when cholesterol levels are too high, plaque builds up along artery walls, leading to hardening called arteriosclerosis. This can cause heart pain (angina), heart attacks, strokes, and blood clots that can cause other problems in the body.

There are many risks associated with taking atorvastatin, so the drug is not as commonly prescribed as it once was. Memory loss, liver damage, type 2 diabetes, and kidney disease are all serious side effects associated with atorvastatin. In fact, a lawsuit in 2014 alleged that Lipitor raised blood sugar levels to the point that some demographic groups were at very high risk of developing diabetes. Drinking alcohol increases the risk of many side effects from atorvastatin, including liver and kidney damage. 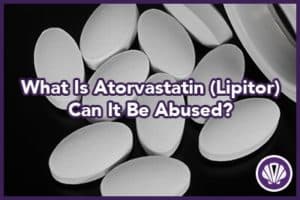 Atorvastatin is the generic name for a widely prescribed statin medication, originally prescribed under the brand name Lipitor. The prescription statin was originally manufactured by Pfizer, and it was approved as Lipitor by the Food and Drug Administration (FDA) in 1996.

Brand-name Lipitor is the bestselling prescription drug of all time. The generic version of atorvastatin has been available for several years, and many people now take this medication under different brand names or as a generic cholesterol-lowering medication.

Side Effects Associated with Atorvastatin

When taken as prescribed, atorvastatin can be useful for many people who need help, alongside lifestyle changes, to manage their cholesterol. Side effects can be managed by adjusting the dose of this medication. Taking any prescription drug without oversight from a physician is dangerous, and atorvastatin is no exception. Even common side effects can become very harmful if they are not monitored.

Adverse side effects from Lipitor can include:

If these do not go away, they can become much more serious and include problems like:

These side effects can become dangerous very quickly and must be reported to the prescribing physician. Self-medicating with Lipitor or generic atorvastatin is extremely dangerous.

One of the most serious side effects from taking atorvastatin is myopathy, a disease in which muscle fibers no longer function properly. Signs of myopathy include muscle weakness, tenderness, pain, and fever. The breakdown of these muscle fibers can lead to rhabdomyolysis, a condition in which toxins from muscle breakdown are released into the bloodstream and lead to kidney damage. 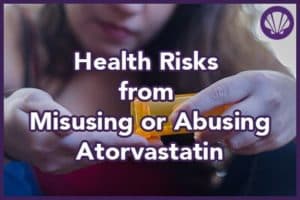 Atorvastatin and other statin drugs do not create a feeling of euphoria or relaxation like other prescription drugs that can lead to addiction, including opioid painkillers, benzodiazepines, and prescription stimulants. However, the drug can be misused by taking it in larger doses than prescribed, ordering the drug illegally without a prescription, or stealing it from a friend or family member’s medicine cabinet.

The term misuse means taking a prescription drug in a manner other than how it is prescribed. This applies to many behaviors around drugs, including substance abuse specifically to get high. While statins do not lead to intoxication, someone who struggles with other forms of drug abuse may steal these drugs and take them due to compulsive behaviors. Someone who does not struggle with addiction, but who does not understand safety risks around their medication, may change their dose or how often they take their medicine on their own without consulting their doctor. Since cognitive changes are a side effect, a person with a prescription for atorvastatin may forget how often they are supposed to take their medication and take it less frequently or more frequently than prescribed. These forms of misuse increase the risk of harmful side effects, which can be life-threatening.

One demographic has been found at risk of drug abuse associated with Lipitor; men who are 60 or older are more likely to abuse atorvastatin or abuse other drugs while also taking Lipitor to lower their cholesterol. This is even more true when an older male has taken Lipitor for 2–5 years, has chronic pain of some kind so he may have a prescription for a narcotic painkiller, and/or also takes Ambien for insomnia or sleeplessness. Sedatives like Ambien or prescription opioids can lead to drug abuse or dependence, and this increases the risk of misuse or abuse of other prescription drugs, including atorvastatin.

People who have abused drugs in the past may be at greater risk of abusing prescription medications, so it is important to disclose any history of substance abuse to the prescribing physician. Doctors will work with patients to manage signs of potential drug abuse. Additionally, people who have a history of alcohol use disorder (AUD), heavy drinking, or binge drinking may have some liver damage already, which atorvastatin can exacerbate.

Following a doctor’s orders with medication is imperative. Many pharmacies and law enforcement agencies also offer drug take-back programs—either on a specific day or as an ongoing program—so that unused prescription medications can be returned, decreasing the likelihood that they will be abused. Those who misuse Lipitor puts themselves at risk for overdose or poisoning.

Is There a Risk of Overdose on Atorvastatin?

Mixing Atorvastatin with Other Prescription or Illicit Drugs

Other forms of atorvastatin misuse and abuse include combining this drug with other substances, especially alcohol.
Lipitor and other statins interact poorly with several drugs, including:

Most people who receive a prescription for a statin medication like atorvastatin are not likely to stop taking it because they need help lowering their cholesterol for the rest of their lives. Suddenly quitting a statin medication can be extremely dangerous due to the risks of heart disease, heart attack, and stroke. These are not withdrawal symptoms, but symptoms of the underlying disease that statins treat. Someone who does not have high cholesterol or a high risk of heart disease, who is taking statins, is likely to suffer harm from side effects but not from quitting the drug since atorvastatin does not cause heart disease.

When the drug is prescribed, reducing or stopping statin use involves a conversation between the prescribing physician and the patient. In some cases, if side effects become serious or lifestyle changes suffice to lower cholesterol, reducing the statin dose or stopping it altogether can be an option.

Getting Support to Stay Sober 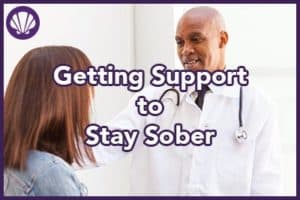 People who have struggled with prescription drug abuse in the past may begin to show signs of relapse into problematic patterns by misusing their atorvastatin prescription. Although statins do not cause intoxication or euphoria, compulsively taking this drug, adjusting the dose without consulting the prescribing doctor, needing refills more frequently than expected, or stealing the drug from loved ones can all indicate that addiction’s compulsive behaviors are resurfacing, and the individual may begin to experience a relapse into abuse of other substances.

Relapse is one of the symptoms associated with addiction since it is a chronic disease. The National Institute on Drug Abuse (NIDA) reports that 40–60% of people who struggle with addiction will relapse, which only indicates a resurfacing of this chronic illness’s symptoms. Other diseases like diabetes, hypertension, and asthma also have symptom relapse, so people with these conditions must return to their doctors for help. Addiction relapse means returning to treatment. Working with a rehabilitation program, finding appropriate aftercare like a support group for drug abuse, and staying in individual therapy are all ways to reduce the risk of addiction relapse.

antidepressants
Prefer getting help via text?
We're available 24/7 via text message. Signup below for access to our team when its convenient for you!
and many more...
What's stopping you?You're not defined by addiction. Let's help you get back in control of your life.