The ways in which a person can become addicted to activities, such as exercise, surfing the Internet, and other activities, may be confusing without an understanding of the nature of addiction.

Knowing how the body responds to certain activities can help clear up the confusion around these types of addictions. The body’s natural pleasure and reward systems that react to drugs or alcohol can also be stimulated naturally through other activities. In a person with risk factors for addiction, these activities can then result in addictive responses in the body, translating into addictive behaviors as a response.

Exercise addiction is one of these types of behavioral addiction, and it can lead to the same health and behavioral risks and challenges that substance abuse can cause. In addition, exercise addiction and substance abuse can contribute to one another, creating a situation where co-occurring disorders feed one another, leading to far more complications in treating symptoms and achieving recovery.

What Is Exercise Addiction? 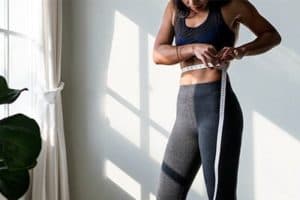 According to Healthline, an exercise addiction is the result of an unhealthy obsession with exercise and fitness. Similar to other addictions, it causes compulsive behavior around exercising, fitness, body composition, and other elements of both the exercise itself and the physical goals of exercise. In many ways, exercise addiction can be related to eating disorders or similar disorders based on an obsession with appearance.

People who are addicted to exercise work out obsessively, sometimes even ignoring injury, illness, or disruptions that the large amounts of exercise may cause in the person’s life. A person with exercise addiction may neglect other areas of life in order to exercise, such as:

People with exercise addictions may also use exercise as an escape from stressors. Research such as that reviewed by Current Pharmaceutical Designdemonstrates that exercise can activate the body’s dopamine system, effectively lowering stress symptoms. This may be a major contributing factor to the development of exercise addiction.

According to the Journal of Behavioral Addictions, about 3 percent of the exercising population are struggling with exercise addiction, though this is only a small percentage of those who may be at risk of developing the disorder. Much of the research seems to indicate that exercise addiction develops out of what began as healthy exercise habits. However, for those who are addicted to exercise, a physical and psychological dependence has developed that can result in withdrawal symptoms if exercise is stopped.

When an individual exercises, the body produces certain chemicals that activate the pleasure centers of the brain. As described above, dopamine – the body’s neurochemical that creates a feeling of pleasure and reward – can be activated by this process. The dopamine pathway is also activated by different types of substance abuse, and it is implicated in various different types of addiction.

An article from the British Journal of Sports Medicine indicates that exercise activates other hormones and neurochemicals that promote feelings of wellbeing and, in some cases, even euphoria. The “runner’s high” is an example of these responses to exercise. These chemicals include norepinephrine, which produces a feeling of relaxation, and endocannabinoids, which promote sedation and a sense of wellbeing. Because these pathways are also involved in the physical and psychological responses that can lead to substance abuse, the implication is that exercise addiction is a result of the same processes that lead to addiction to drugs and alcohol.

An article from Addiction Research and Theory proposes a screening tool – the Exercise Dependence Scale – that can help identify those who are at risk for or struggling with exercise addiction. The tool is based on the signs of exercise addiction, which include:

Several studies, such as one from Psychology & Health, have shown that the Exercise Dependence Scale can accurately indicate those who are at highest risk of developing an exercise addiction. If exercise addiction is suspected, working with a treatment professional to assess the symptoms is the first step toward getting help.

While research on the co-occurrence of exercise addiction with substance abuse is rare, a study from the International Journal of Environmental Research and Public Health suggests that as many as 20 percent of those who have an exercise addiction are also addicted to drugs or alcohol. Another study from Evaluation and the Health Professions indicates that it may be about 15 percent. Further study is needed on the connection.

Nevertheless, the potential for a relationship between drug abuse and exercise abuse is clear. Some athletes who are addicted to exercise may use substances like steroids, cocaine, or other stimulants to boost performance, becoming addicted in the process. Also, a large percentage of people with anorexia are also addicted to exercise. The prevalence of people with anorexia who are also abusing substances is high, and this could co-occur with and complicate exercise addiction.

Addiction is often associated with genetics, or a family history of addiction and mental illness. Noting the evidence that exercise addiction activates similar chemical pathways in the brain as substance addiction and abuse, it is reasonable to expect that people who have this genetic tendency toward substance abuse would also have a similar potential for exercise addiction, if they became excessively involved in exercise. Research is continually being done to study these types of connections.

As with other forms of addiction, exercise addiction can be treated. The form of treatment most helpful in exercise addiction is therapy, such as Cognitive Behavioral Therapy, which helps the person recognize the problem behaviors, understand triggers, and develop tools and skills to interrupt those behaviors and insert healthier ones.

Instead, by working with an accredited, research-based treatment center, people struggling with these forms of addiction can get individualized treatment that takes the behavioral and substance abuse issues into account simultaneously. With a treatment plan that can lead a person to recover and manage both conditions, a person can develop and manage healthier exercise habits and maintain long-term abstinence from substance abuse.