Although love addiction is not listed in the DSM and has not been confirmed as a diagnosis by the American Psychiatric Association, this condition, like sex or gambling addictions, involves impulse control problems, changes in behavior, and increasing isolation in order to focus on the obsession.

Sex and Love Addicts Anonymous offers 40 questions for self-diagnosis, so an individual suffering from love addiction can begin to seek therapy and support.

Like any behavior that produces a reward sensation with dopamine or serotonin, love can become addictive. Several anecdotal reports suggest that leaving a romantic relationship or intentionally becoming single can cause withdrawal symptoms like drugs or alcohol.

General symptoms of love addiction include:

Causes or Triggers for Love Addiction

According to an article published by Psychology Today, the causes of love addiction are a mix of potential underlying psychological issues like anxiety disorders, depression, or impulse control disorders, and delusions about romantic cultural norms. Causes of love addiction include low self-esteem, inadequate nurturing or neglect in formative childhood years, a lack of positive role models for romantic partnerships during childhood, and indoctrination of a culture obsessed with happy endings.

A meta-analysis conducted through Syracuse University suggests that falling in love is like cocaine addiction. The chemical process of “falling in love” involves the rapid release of vasopressin, adrenaline, oxytocin, and dopamine all at once, causing the individual to associate the object of love with comfort, good outcomes, reward, and feeling “high” and “excited.” According to that analysis, passionate or romantic love in particular involves the reward-processing centers of the brain, so love addiction acts on the brain and behavior much like gambling, sex, and gaming addictions.

An article published in The New York Times in 2006 describes one unfortunate woman’s personal experience with love addiction. In order to pursue the object of her affection, she dropped out of school, quit her job, and stopped speaking to family and friends. When she did not hear from him, she began to vomit, sweat, shake, and even black out. She was 15 pounds under her healthy weight and slept for 15 hours a day sometimes; other times, she didn’t sleep at all. She checked into an inpatient rehabilitation facility that offered treatment for a variety of addictive problems, from substance abuse and dependence to love and sex addiction. Even in the first months of her rehab stay, she suffered obsessive thoughts about her romantic partner, and when he left her a voicemail, she lost count of the number of times she replayed it. Six years later, she has mostly identified her symptoms when she begins to experience another love addiction and has moved past her original addictive relationship.

Any experience that releases dopamine, adrenaline, serotonin, or other reward chemicals in the brain can lead to an addiction in some people. There has been little research conducted on whether or not some people can become physically dependent or addicted to love, and with the release of the DSM-5, the definitions of “addiction” and “disorder” are beginning to change. However, self-reporting statements from those who seek treatment in support groups suggest that there is some type of potential love addiction disorder, which might use the same neural pathways as substance addictions, or have an underlying pathology like depression or bipolar disorder to support an increased risk for both love addiction and substance abuse. 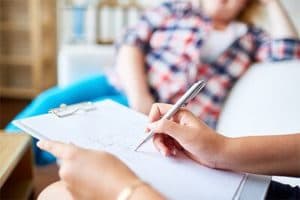 Since there is no official clinical definition for love addiction, people suffering this disorder are best advised to seek treatment via Cognitive Behavioral Therapy (CBT) to help them learn healthier patterns of behavior and become more aware of their own patterns. These individuals should also seek talk therapy and group therapy, in order to develop more awareness through an outside eye and the experiences of others with love addiction.

In some cases, a person can benefit greatly from inpatient rehabilitation. In cases of behavioral disorders, such as gambling addiction and love addiction, environmental stress and triggers can make the condition worse, therefore making it more difficult to overcome. When removed from a triggering environment, individuals can develop a better understanding of their patterns of behavior and how these have negatively impacted them. They can also develop social relationships with likeminded individuals, which can help them when they return to their lives after treatment.