At American Addiction Centers, we strive to provide the most up-to-date and accurate medical information on the web so our readers can make informed decisions about their healthcare.

Our reviewers are credentialed medical providers specializing in addiction treatment and behavioral healthcare. We follow strict guidelines when fact-checking information and only use credible sources when citing statistics and medical information. Look for the medically reviewed badge ( ) on our articles for the most up-to-date and accurate information.

If you feel that any of our content is inaccurate or out-of-date, please let us know at ContactAAC@ContactAAC.com. 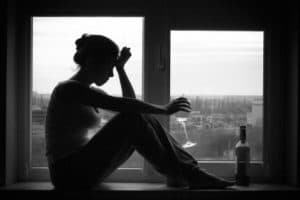 When individuals experience alcohol addiction they, as well as their loved ones, may question if childhood trauma contributed to their current unhealthy and unsafe relationship with alcohol.

According to the National Institute on Alcohol Abuse and Alcoholism (NIAAA), there’s a robust connection between childhood trauma and other adverse events and the development of alcohol dependence or addiction later in life. Childhood trauma can include sexual abuse, physical abuse, physical neglect, emotional abuse, emotional neglect, or the incarceration of a parent. Adverse events experienced during childhood, such as having a battered mother, substance abuse or mental illness in the home, and parents being separated or divorced also contribute to the likelihood of abusing alcohol as an adult.

NIAAA notes that there’s inadequate data to support an absolute causal connection between childhood trauma and later alcohol dependence. However, many studies suggest that the trauma often precedes the alcohol abuse: the trauma can cause symptoms, such as anxiety, to emerge, and the now older victim drinks alcohol to cope with the symptoms.

In fact, research has found that childhood trauma can impact a child’s neurobiological development and subsequently predispose the child to anxiety, depression, and substance abuse later in life. In this way, alcohol abuse can be seen as a response to deficits in the functioning of the brain and not solely as a matter of personal choice.

Research has also demonstrated that the likelihood of future adult alcohol abuse is even higher for children who experienced trauma or other adverse events when one or both parents had a history of alcohol abuse.

One study of females and males in treatment for substance abuse found that 62% reported experiencing physical abuse or sexual abuse in childhood. This finding is alarming and serves to reaffirm the connection between childhood abuse and later alcohol dependence. The public’s awareness of the severity of trauma caused by childhood sexual abuse has led to extensive research in this area as it relates to alcohol abuse.

Take for example one study that involved 1,411 adult female twins who reported experiencing sexual abuse in childhood. The researchers sought to determine how strongly connected this experience was to the development of psychiatric disorders and/or alcohol or drug abuse later in life. The study concluded that sexual abuse in childhood was more likely to have predisposed the female participants to develop alcohol or other drug abuse than to develop psychiatric disorders.

Further, the experience of sexual abuse can more deeply entrench a person’s dependence on alcohol. According to one study, the alcohol-dependent participants who had experienced sexual abuse in childhood, compared to those who didn’t, were more likely to relapse (87.5% versus 63.3%) and to do so in a shorter span of time (at the 60-day mark of abstinence compared to 115 days).

Still other research of female twins found that those who had experienced trauma (sexual and non-sexual) and then developed post-traumatic stress disorder (PTSD) were twice as likely to develop alcohol dependence compared to those who didn’t have PTSD.

A study of 196 males and females in treatment, published in Alcoholism: Clinical & Experimental Research, provides wide-spanning insights into the connection between trauma, mental health, and alcohol dependence and addiction. Some highlights among the findings include:

From a treatment standpoint, the prevalence of child abuse among males and females in recovery for an alcohol use disorder requires targeted services to address these traumas.

One of the most traumatic experiences a person can endure in adulthood, as well as in childhood, is a sexual assault. Due to the devastating impact of a sexual assault, such as rape, some studies have focused on the impact of such an experience on the victim’s mental health. Some of this research may be heavily skewed to reflect the female experience of sexual assault, but males are also victims and may be especially vulnerable because they may underreport this crime.

Further, a female or male who has experienced a rape not only faced the trauma of that experience but also the painful aftermath. For instance, one survey found that a reported 69% of rape victims were concerned that they would be blamed for the rape.

In addition, some survivors of rape may not have, or perceive they have, adequate support from friends and loved ones to cope with the experience. According to the Rape, Abuse, and Incest National Network, the following are some potential reasons why rape survivors turn to alcohol to cope::

Another layer of complexity involves rapes and other sexual and nonsexual assaults that haven’t been reported. A person may rely on alcohol, and develop an abuse pattern, in an attempt to employ self-help. However, individuals don’t typically have the skills to self-manage such a trauma.

A support network is most advisable, especially one composed of mental health and addiction treatment professionals as well as family and friends. A mental health services center or alcohol rehab center can provide a person who has survived childhood and/or adult trauma with a safe and professional space in which to begin the recovery process.

We are here to help you learn how to live without reaching for the next drink. Laguna Treatment Hospital is located in Orange County, CA. The first chemical dependency recovery hospital in the OC, we offer safe medical detox, mental health support, and wellness programs. We remain open and committed to supporting your recovery journey. Laguna is taking every precaution to ensure patient and staff safety. We are able to test incoming & current patients as well as staff for coronavirus to ensure peace of mind and focus on addiction treatment.

Ryan Kelley is a nationally registered Emergency Medical Technician and the former managing editor of the Journal of Emergency Medical Services (JEMS). During his time at JEMS, Ryan developed Mobile Integrated Healthcare in... Read More

We're available 24/7 to answer questions and help you make decisions about starting recovery from alcoholism.

Worried about how much alcohol is being consumed?