What Are the Signs of Use and Abuse of Methylone?

Methylone is a relatively new stimulant drug, which is chemically similar to MDMA or ecstasy. It is often found in synthetic cathinones like bath salts and ecstasy-related drugs like Molly. This substance is considered a new psychoactive substance (NPS) and a research chemical. It was synthesized in 1994 as a potential medication, but later abandoned. The drug was then co-opted by clandestine laboratories as an intoxicating, addictive drug to be sold illicitly.
Although it was marketed as “air freshener” and marked “not for human consumption,” the intention was for the drug to get users high. It was first reported in the US by the Drug Enforcement Administration (DEA) in 2009, placed temporarily on the Schedule I list in 2011 because bath salts were found to be very dangerous, and then permanently moved to Schedule I, which is a full federal ban, in 2013. The drug has been synthesized since at least 2004 when it was reported in the Netherlands.

Since methylone is often mixed into harmful substances like bath salts and Molly, it is considered extremely dangerous. In very low doses, methylone by itself reportedly produces almost antidepressant qualities, making the person feel positive and pleasant. However, since it is sold as a drug of abuse, it is usually found in larger quantities, which can produce mild hallucinogenic effects, paranoia, and other harmful reactions.

Methylone is typically sold online these days, since the US and many other countries have banned it. The substance is sometimes found in pill form, but it is usually a clear liquid, sold in bottles labeled “room deodorizer” with warnings not to consume it and to keep it away from children. These sorts of cautionary labels are common on synthetic cathinones and cannabinoids, as a way of seeming legal or making them easy to hide or excuse. However, methylone is a dangerous drug. Although its addictive potential is not well understood, it is very toxic, difficult to dose, and can lead to severe physical and mental side effects. 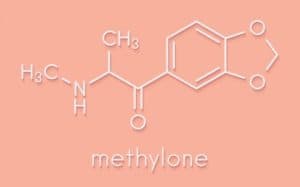 Methylone triggers euphoria by causing the brain to flood itself with dopamine and serotonin, leading to an intense euphoric high like that associated with amphetamines, MDMA, and even cocaine or methamphetamine. This intense high is why people abuse this drug, and it may lead to addiction, although this result is not well understood.

Psychological effects reported are like those of other stimulants:

In lower recreational doses, panic and insomnia are the most likely lasting effects of methylone; however, if the person abuses a lot of methylone, or takes several doses over a few hours, they may experience a break from reality, leading to psychotic behaviors that require hospitalization to treat.

Acute psychosis may ease with time, but the person’s brain may be permanently changed. They may struggle with anxiety, depression, bipolar disorders, schizophrenia, or psychotic episodes throughout their life. Since methylone is a newer drug, the long-lasting impact on the brain’s structures is not well understood, but these chronic effects are risks associated with similar stimulants, including MDMA, cocaine, and meth.

The physical effects associated with methylone, whether used alone or in combination with other chemicals to make up bath salts or Molly, are extremely dangerous. While the mental effects can be severe, physical side effects from taking a potent stimulant like methylone can lead to death. These include:

Reports of bath salts abuse between 2009 and 2012 focused on hospitalization of individuals due to acute psychosis and heart failure. Although these conditions can both be treated, damage to the heart and other organs, especially the kidneys, may be permanent and require long-term care. This is likely to shorten one’s lifespan and reduce overall quality of life.

Although methylone is not fully understood, many people have abused this substance and suffered because of it. It is important to get professional help to address addiction to potent stimulants like methylone. Start with an intake interview to assess the problem, complete medically supervised detox, and enter comprehensive rehabilitation to get therapy to change behaviors around intoxicating drugs.