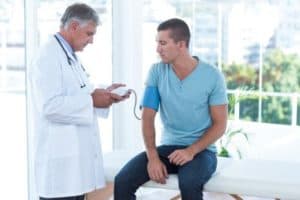 According to the DSM, body dysmorphic disorder (BDD) is an obsessive, disruptive preoccupation with an imagined defect in the individual’s appearance, or, if a flaw exists, being overly concerned with the effect of that flaw on the individual’s overall appearance.

The concept of bodily dysmorphia first appeared in the writings of Italian physician Enrique Morselli, who described the condition in 1886 as “dysmorphophobia,” or the fear of being in the wrong shape or form.

Body dysmorphic disorder can lead to social anxiety and isolation. Although the condition can cause a person to obsess about any part of the body, common areas of obsession include:

To soothe anxiety around an individual’s appearance, the person may engage in a variety of repetitive or compulsive behaviors ranging from staring in the mirror for a long period of time, to pursuing cosmetic surgery without finding satisfaction in the results.

Common behaviors that BDD sufferers engage in are:

BDD is prevalent in about 1 percent of the population, equally proportioned between men and women. Onset typically occurs during adolescence, when growth spurts and hormonal changes, combined with social pressure and teasing or bullying, trigger anxiety and the subsequent fixation on appearance.

Causes of body dysmorphic disorder are still unclear, but most medical researchers believe it to be caused by a combination of biological and environmental factors that affect brain chemistry, leading to anxiety, depression, suicidal thoughts, obsessive-compulsive disorder, or other comorbid mental health disorders alongside BDD.

Although this disorder occurs in both men and women, with a focus on marketing and media representations of women, men have received less attention for BDD than women. Men are statistically less willing to come forward to discuss a mental health issue in general as well. However, the popularity of memoirs such as Brian Cuban’s Shattered Image: My Triumph Over Body Dysmorphic Disorder has shown that men and women both are susceptible to this mental health problem for a variety of reasons.

While areas of the body like weight, hair quality, and skin health are targets for obsessive thoughts and behaviors in both sexes, the way body dysmorphic disorder manifests is different between the sexes. Although there are few clinical studies examining male body dysmorphic disorder, the small number of them so far have focused on heterosexual men. These clinical investigations show that heterosexual men tend to worry primarily about body weight, muscularity, height, penis size, and body hair, including baldness.

Men who suffer from BDD often seek cosmetic surgery to “fix” perceived flaws in their appearance. This can include rhinoplasty, liposuction, muscle implants, and hair plugs. Although many people each year seek cosmetic surgery, people who suffer from BDD do not find any pleasure in their appearance after surgery, and often do not feel that their perceived imperfection has gone away. They may also suffer anxiety that it will come back. For men, worries about balding, excessive body hair, shortness, lack of muscles, or small, misshapen, or uneven genitals often indicate underlying concerns about masculinity.

Bigorexia, the popular term for muscle dysmorphic disorder, is one of the more common forms of BDD in men. While obsession with muscle size occurs in women, it is much more likely to affect male sufferers of BDD. Some recent studies have suggested that 1 in 10 men at the gym suffers from bigorexia, or “reverse anorexia.” Men suffering muscle dysmorphic disorder believe that they are too skinny or lean, or that their bodies have excessive fat and not enough muscle. This leads to:

Concerns about weight have led BDD sufferers of both sexes to develop obsessive calorie-counting behaviors or aversions to specific foods, anorexia and bulimia, and chemical dependency. People with eating disorders have a higher prevalence of chemical dependency. For example, one study showed that 24 percent of people with bulimia also suffered from alcohol abuse. In men, 57 percent of males with binge eating disorder also suffered a substance use disorder. Drugs are often abused as a way to control weight in people with body dysmorphia or eating disorders, and this is especially true of stimulants. 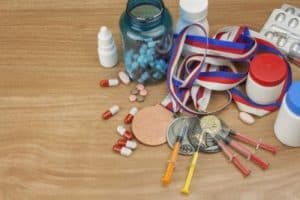 Men who suffer from muscle dysmorphic disorder in particular are more prone to using anabolic steroids to gain muscle mass. Actual statistics on steroid use are difficult to determine because they are illegal substances, but several men in multiple studies of BDD with bigorexia admitted to having used or abused steroids in order to gain muscle. One study indicated that high school boys with muscle dysmorphic disorder took steroids in 6-7 percent of cases.

Steroid abuse has many life-limiting side effects. Short-term effects can include headaches, acne or oily skin, infections at the injection site (if injected), and yellowing of the skin and eyes as jaundice sets in. Long-term effects include liver and kidney damage or failure, enlarged heart, high blood pressure, aggression and mood swings, paranoia and accompanying jealousy, delusions, impaired judgment, and heart attack, even in young people.

When men with BDD seek help, Cognitive Behavioral Therapy (CBT) seems to work the best. CBT seeks to restructure the person’s thinking, so the person can understand why certain habits are harmful and replace them with better habits. Anti-anxiety medications and antidepressants can help stabilize the person’s mood temporarily, but especially when substance abuse problems are comorbid with BDD, both the individual and the prescribing doctor should monitor habits and side effects closely. Medications like clomipramine, which is used to treat obsessive-compulsive disorder, is also sometimes used to ease BDD symptoms.

In cases of co-occurring substance abuse and BDD, residential treatment may work best. By dealing with the underlying causes of both BDD and substance abuse through talk therapy, CBT, and support groups, men are more likely to understand their disorders, continue to seek help, develop healthy lifestyle habits, and find emotional support in other.

Editorial Staff
Editorial Staff, American Addiction Centers
The editorial staff of Laguna Treatment Center is comprised of addiction content experts from American Addiction Centers. Our editors and medical reviewers have over a decade of cumulative experience in medical content editing and have reviewed... Read More
The Best Place to Recover in Orange County
Laguna Treatment Hospital is located in Orange County, CA. The first Chemical Dependency Recovery Hospital in the OC, we offer safe medical detox, mental health support, and wellness programs.
Program Overview How Can I Afford It?
Call Now
One size treatment doesn't fit all. We will tailor treatment to your needs.
(949) 565 2377