What Is Bulimia, and Can It Lead to Drug Abuse? 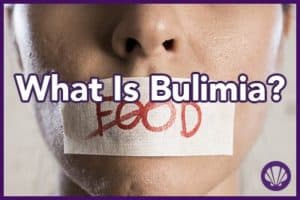 According to the American Psychiatric Association (APA), feeding and eating disorders are characterized by some type of repetitive disruption in feeding or the eating process that consists of alterations in one’s consumption of food and/or an attempt by someone to alter the digestive process of food they have eaten. The qualification for a formal diagnosis of a mental health disorder related to this behavior can only be made if the behavior is frequent and repetitive, and the individual’s health or functioning in significant areas of their life is affected by these actions.

According to APA, bulimia, formally classified as bulimia nervosa, is an eating disorder that occurs when an individual repetitively engages in a series of cyclical binge eating episodes followed by some form of compensatory behavior that is designed to eliminate the food that was ingested during these binging periods. These types of compensatory behaviors may be quite varied. The behavior the individual engages in is also associated with potential dysfunctional or impairment in physical or emotional health, or in important areas of life, such as work, personal relationships, school, etc.

For an individual to be diagnosed with bulimia, they must engage in both the repetitive bingeing behaviors and the repetitive compensatory behaviors designed to eliminate food. Individuals who simply engage in numerous episodes of binge eating may be diagnosed with a binge eating disorder. Clinical expertise is often needed to ascertain whether an individual’s behavior is disordered and if it qualifies as a binge eating disorder, bulimia, or anorexia.

Formal diagnostic criteria are listed in the APA’s Diagnostic and Statistical Manual of Mental Disorders – Fifth Edition as well as in a number of accompanying professional supplementary texts, such as Kaplan and Sadock’s Synopsis of Psychiatry.

It should be noted that individuals who are diagnosed with anorexia may also demonstrate the binge/purge cycle. However, individuals with anorexia display significant and unhealthy weight loss and a distorted body image that borders on being delusional in nature (always viewing themselves as being too fat even if they are dangerously thin), whereas individuals diagnosed with bulimia typically do not display unhealthy weight loss and this distorted body image.

These designations help clinicians to design appropriate interventions associated with an individual’s disorder. However, any expression of bulimia is a representation of a severe mental health disorder that requires formal intervention.

According to the book Eating Disorders: A Guide to Medical Care and Complications, some other signs that someone may be suffering from an eating disorder like bulimia include:

These signs should not be used to definitively decide that an individual has developed some type of feeding/eating disorder, but they may be indicators that further investigation is warranted. For example, many dedicated individuals engage in exercise in situations that others may see as extreme. It is important to understand that these behaviors need to be repetitive and significantly extreme in their presentation. When in doubt, consult with a licensed mental health clinician.

Who Suffers from Bulimia? 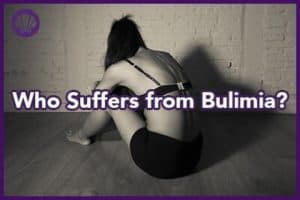 APA and the National Institute of Mental Health report that bulimia is far more common in females than males; it is diagnosed at a ratio of 10 females to every male. The overall prevalence of bulimia is 1-1.5 percent of the US female population and about 0.06 percent of the entire population. Bulimia is more commonly diagnosed in adolescent females, and first-time diagnosis of bulimia in females older than 40 years old is rare. Many people occasionally engage in bingeing and purging episodes; when this behavior is occasional, it is not considered to be severe enough to qualify for a formal diagnosis.

The process of bingeing on food occurs often in individuals who have been trying to diet or lose weight. It is also a result of attempts to deal with stress in some individuals. When these individuals begin to frequently engage in bingeing episodes that are followed by compensatory purging episodes, they are at risk for developing the formal diagnosis of bulimia nervosa.

Substance use disorders that are most commonly diagnosed as co-occurring disorders in individuals with bulimia include alcohol use disorders and stimulant use disorders. Stimulant abuse that co-occurs with a diagnosis of bulimia is most often a compensatory form of purging in an attempt for the individual to lose weight. Alcohol abuse in individuals with bulimia is believed to be a result of the individual attempting to deal with stress related to functional impairment associated with their eating disorder. When individuals use drugs or alcohol to deal with the stress related to the effects of some other mental health disorder, it is labeled as avoidance-based coping, and the effects of this activity often result in a downward spiral, such that substance abuse becomes distressing and disabling in itself, and greater substance abuse then occurs to compensate for the additional stress/dysfunction. 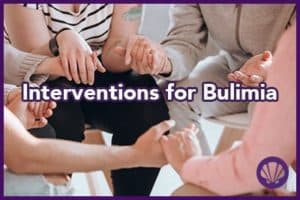 Individuals with bulimia are notoriously difficult to treat due to a number of co-occurring issues and because they often are not honest regarding their behavior. These individuals often do not see their behavior as dysfunctional even if their behavior results in significant impairment or dysfunction in relationships, work, recreational activities, health, etc. This is compounded by the potential for these individuals to also have co-occurring substance use disorders because they display the same types of avoidance and reactive behavioral tendencies.

The best approach is to find a licensed mental health professional who specializes in the treatment of these disorders. There are no formal medications that can treat eating disorders like bulimia without the use of psychotherapy. The best approach is a combination of medications, such as selective serotonin reuptake inhibitors (a type of antidepressant medication), other medications that are relevant in the particular situation, and very intense and involved psychotherapy. Psychotherapy for eating disorders often includes participation in both individual and group therapy sessions.

People who have co-occurring substance use disorders can also benefit from participation in 12-Step groups, such as Alcoholics Anonymous. Anyone with bulimia can benefit from social support groups for eating disorders.