Substance Use Treatment in America

As the opioid epidemic continues across the country, advocates on both sides of the aisle agree on a vital solution: treatment. Although funding for recovery resources was a rare area of bipartisan collaboration during 2018 federal budget discussions, implementation has lagged far behind that allocation. Funds have been tragically slow to reach struggling state-level agencies, and the White House has suggested funding should be split between treatment and its tough-on-crime approach. Experts, meanwhile, welcome federal efforts that emphasize treatment but warn far more spending will be required to meet the nation’s needs effectively. If the necessity of treatment resources is beyond debate, disputes regarding methods and money remain.

But what do national data on addiction and its treatment tell us about how we should approach this complex problem? To find out, we dug into the latest National Survey on Drug Use and Health, studying the prevalence of substance use disorders and how Americans seek help. Our findings shed light on some crucial elements of the country’s drug crisis and reveal the vast degree of desperate need. Keep reading to see who needs treatment most across the country, and which obstacles prevent them from achieving recovery. 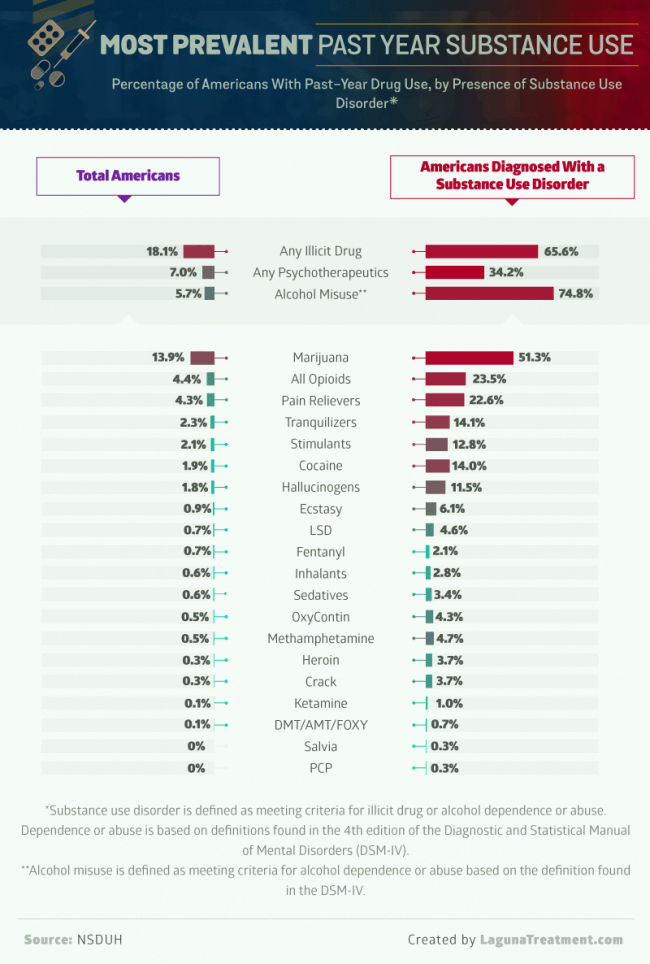 Overshadowed by the frightening headlines of the opioid crisis, an American epidemic of alcoholism has also emerged in recent years, with spiking rates of excessive drinking among women and minorities in particular.

Turning to specific substances, cannabis consumption was heavily concentrated among respondents with a substance use disorder: More than half had smoked marijuana in the past year, compared to just under 14 percent of all respondents. Slightly less than a quarter of substance misusers had used opioids as well, whereas fewer than 1 in 20 respondents overall had done so. Interestingly, rates of heroin use were vastly lower, at just 3.7 percent of substance misusers in the last year. This discrepancy between heroin and opioid use could indicate the relative popularity of prescription drugs, although many users transition to heroin eventually. 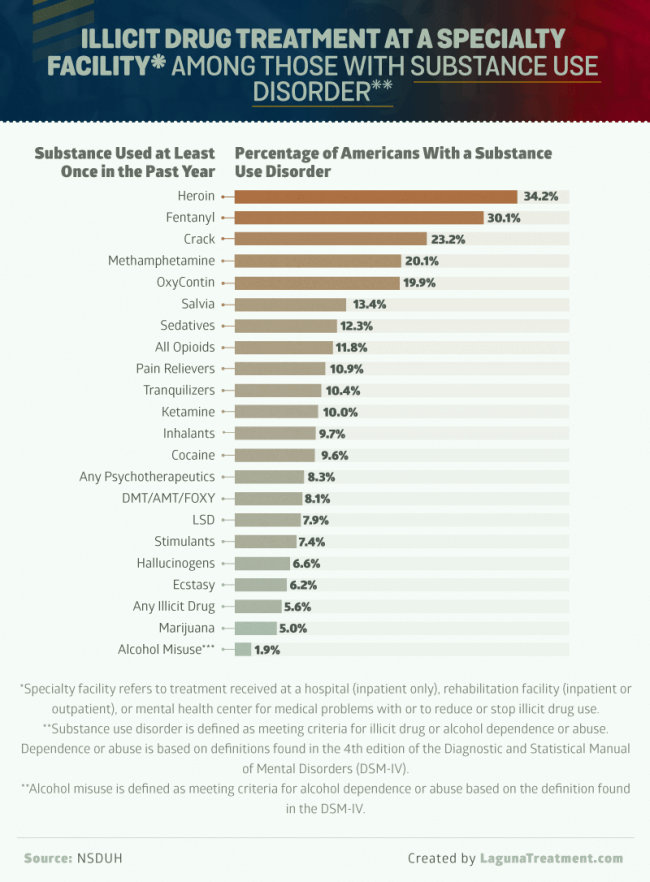 Among heroin users, more than a third had received treatment at a specialized facility within the past year. Among users of fentanyl, the rate was nearly as high. These figures may seem encouraging, but high rates of relapse among those addicted to opioids have led many to advocate for new treatment methodologies, including medication-assisted approaches. A smaller but significant portion of OxyContin and other opioid users had received treatment in the last year as well.

Often, however, chemically similar substances produced very different rates of seeking treatment. Crack cocaine users had one of the highest rates of receiving help, for example, while fewer than 1 in 10 powder cocaine users attended a facility for treatment. Likewise, methamphetamine users sought treatment at much higher rates than those who used other stimulants.

These disparities may reflect the intensity of these substances or the severity of the personal consequences their users face.

Not Ready for Rehab 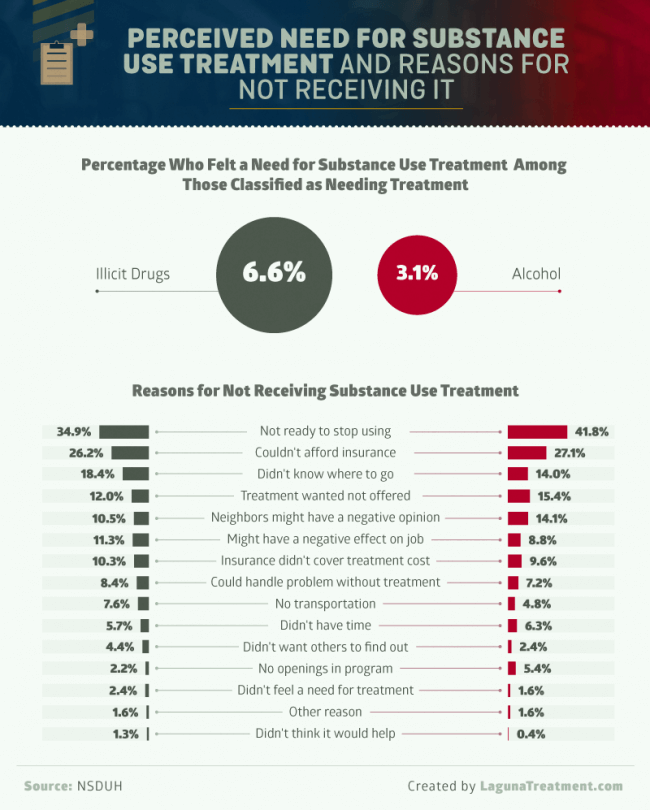 Among respondents classified as needing treatment for their substance use problem, only 6.6 percent felt they needed treatment for their use of illicit drugs, while 3.1 percent reported needing help with their drinking. When asked why they weren’t actively seeking treatment, the most common answer was quite simple: They weren’t ready to stop. This was particularly true among users of alcohol, of whom more than 40 percent said they were unready to stop using. A lack of insurance was another common catalyst toward delaying needed treatment. Although the Affordable Care Act requires substance use treatment be included in insurance coverage, millions of Americans remain uninsured.

Other common reasons for putting off treatment related to uncertainty or dissatisfaction regarding available treatment options. Although the treatment industry has grown substantially in recent years, quality of care varies significantly, so choosing the right facility can seem daunting.

Others felt they simply could not find the care they deemed appropriate for their needs. This sentiment was especially common among drug users, perhaps because medication-assisted options have only recently become more commonly available.

As discussed earlier, the primary reason for delaying treatment was feeling unready to stop drinking or drugs. But beyond that explanation, motives for resisting treatment varied considerably among users of different substances.

With users of opioids and illicit drugs, for example, a lack of insurance was a very common cause for holding off. Although state-funded options do exist for the underinsured or those without coverage, demand often exceeds what they can offer.

Other data points indicate the stigmatization of addiction may be costing Americans their lives. Among heroin users, for instance, the third most common reason for delaying treatment was fear of what the neighbors would think. LSD users tended to have similar concerns, as did users of crack and cocaine to a lesser extent. Others cited fears that seeking treatment would negatively impact their professional situations – an uncomfortable reality for some when returning to the workforce after getting help. 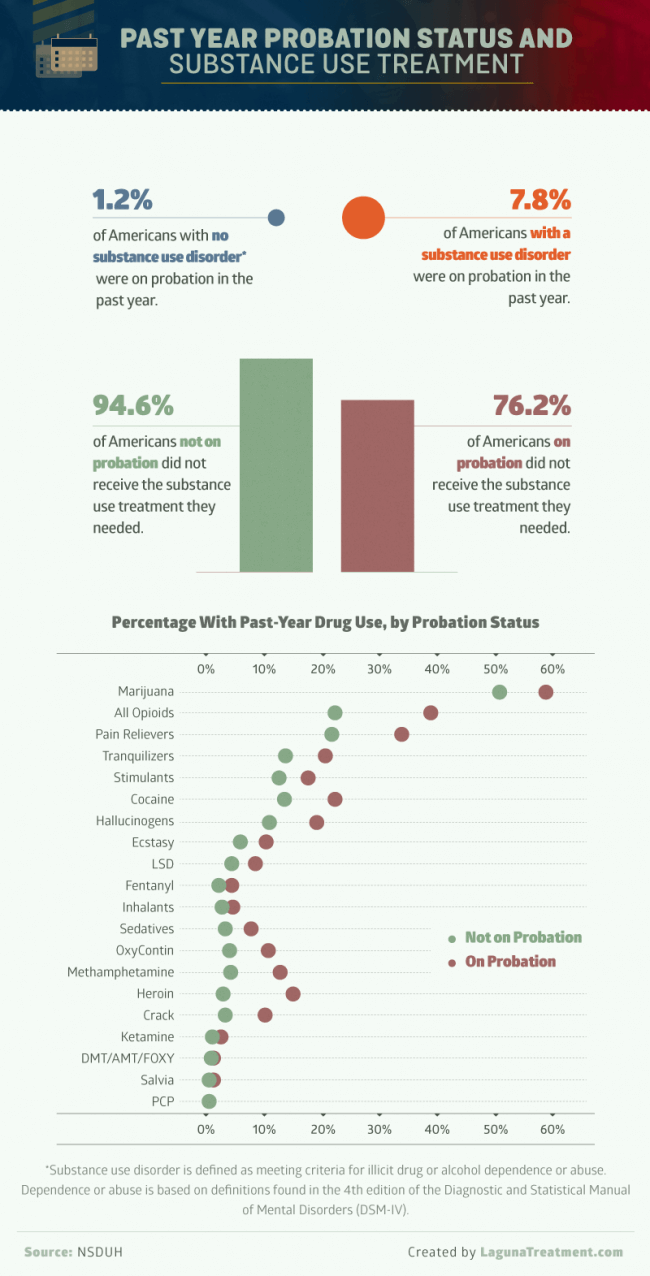 Yet, those on probation were less likely to have their need for treatment go unmet, suggesting law enforcement interventions are at least somewhat effective in directing those convicted of crimes to get help.

Probation and recovery have a long and complicated history: While courts often demand sobriety as a condition of supervised release agreements, some advocates criticize that practice, arguing relapse is symptomatic of the chronic illness of addiction. Our data suggest a far greater portion of those on probation experience a substance use disorder, relative to the public as a whole.

That said, individuals recently or currently on probation were more likely to use an array of drugs than the public at large. This disparity was most evident for some of the more dangerous drugs included in our analysis, such as opioids, pain relievers, heroin, and meth. Unfortunately, these figures likely reflect high rates of drug dependence among incarcerated Americans. Such statistics have caused many to suggest more comprehensive treatment in jails and prisons, so former drug users can receive help before they are released. 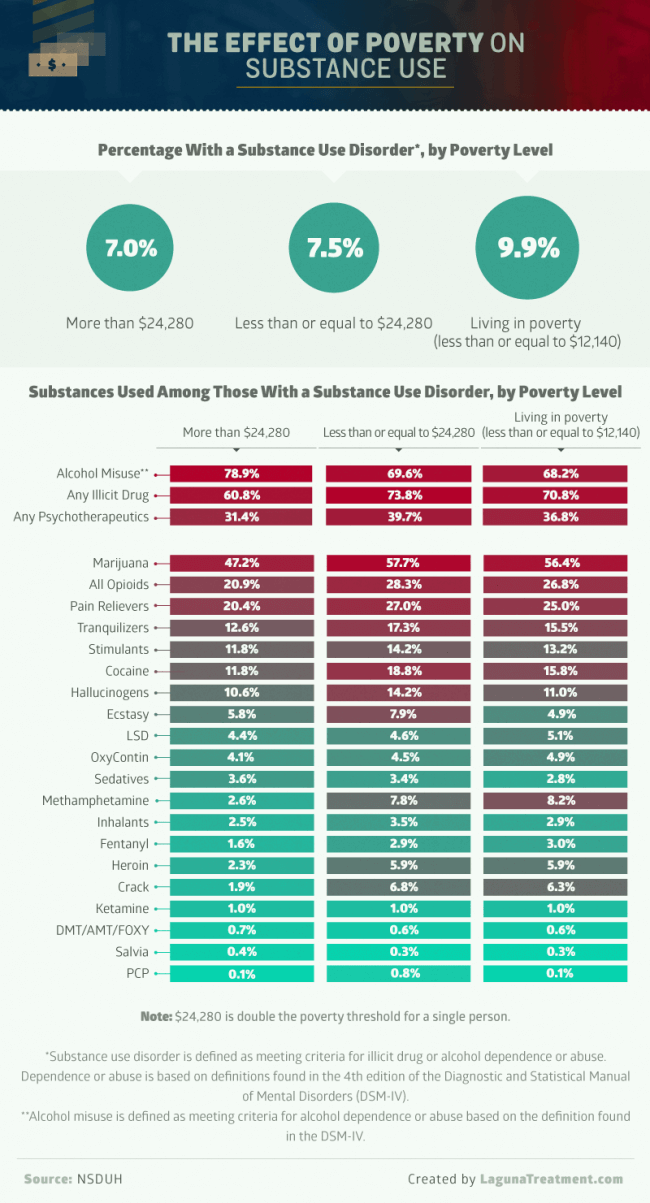 Our data confirm the notion that poverty is a risk factor for substance misuse: Income was inversely correlated with rates of substance use disorder. Interestingly, however, those who earned more than $24,280 were most likely to misuse alcohol, whereas drug use was most common among those who earned that amount or less. Substance misusers making more than $24,280 were slightly less likely to use psychotherapeutics as well.

Although this pattern was also visible on the level of specific substances, some drugs were common among all economic groups. The most prominent example was marijuana: Nearly half of those making $24,280 or more had used cannabis in the past year. Similarly, in each earnings bracket, more than 1 in 5 substance misusers had used opioids.

This finding resonates with research suggesting the opioid epidemic is a distinctly middle-class phenomenon, rather than one concentrated exclusively in poor communities. 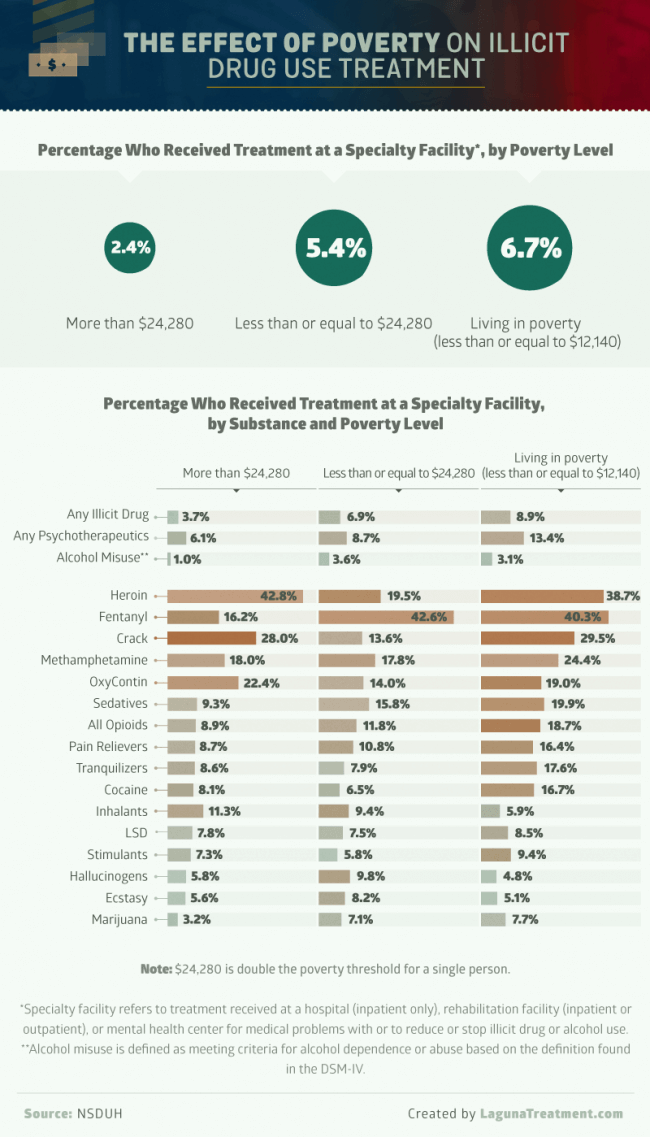 This phenomenon could be explained by public health insurance options for poorer Americans, although Medicaid coverage of treatment varies widely across state lines. Also surprising was the category of substances that correlated most strongly with receiving treatment: psychotherapeutics.

It’s worth noting, however, that the highest income bracket received treatment for heroin and OxyContin addiction at the greatest rates. Conversely, fentanyl treatment was much more common for the two lower income groups, as was rehab for opioids generally. Surprisingly, treatments for both crack and cocaine were most frequent among the poorest users, although the smokable form of the drug has long been viewed as the cheaper alternative to the pure powder.

Interestingly, substance users living in poverty were more likely to have received treatment than those who earned higher incomes.

As America’s harrowing drug misuse crisis continues, our findings attest to the urgent need for care nationwide. Yet, no statistical approach can truly describe the challenges of those struggling with addiction. These Americans and their families deserve better, and no barrier to treatment can justify their continued pain. Whatever seems to stand in the way of their recovery, there’s likely more reason for hope than they know.

With our network of evidence-based treatment providers, Lagunatreatment.com can help you navigate the path to help. Choosing well-being should never be confusing, so our personalized process will alleviate your anxieties and answer your concerns. As our findings suggest, choosing to get better can be the most difficult part. Once you do, we’re in your corner.

We used SAMHSA’s NSDUH data to explore substance use treatment in America and how it varies by demographic. All calculations in this analysis were done using the most recent NSDUH 2016 public-use files. SAMSHA’s online detailed tables are based on their restricted-use files, so the estimates given here are slightly different.

As stated in the NSDUH quality assessment of public-use files: “NSDUH’s public-use files (PUFs) maintain high data quality and comparability with NSDUH’s restricted-use files (RUFs), which will provide confidence to researchers and policymakers for making policies and public health decisions based on PUF data.”

If you’d like to share our findings on the substances being met with the most treatment, we welcome your help in spreading this important information for any noncommercial purpose. If you do use our findings and graphics, simply provide a link to this page for purposes of attribution.